Journalists and media professionals from North Macedonia benefited from space for conversations on the topics of gender equality and how their work can contribute to the fight to end violence against women in the long term. 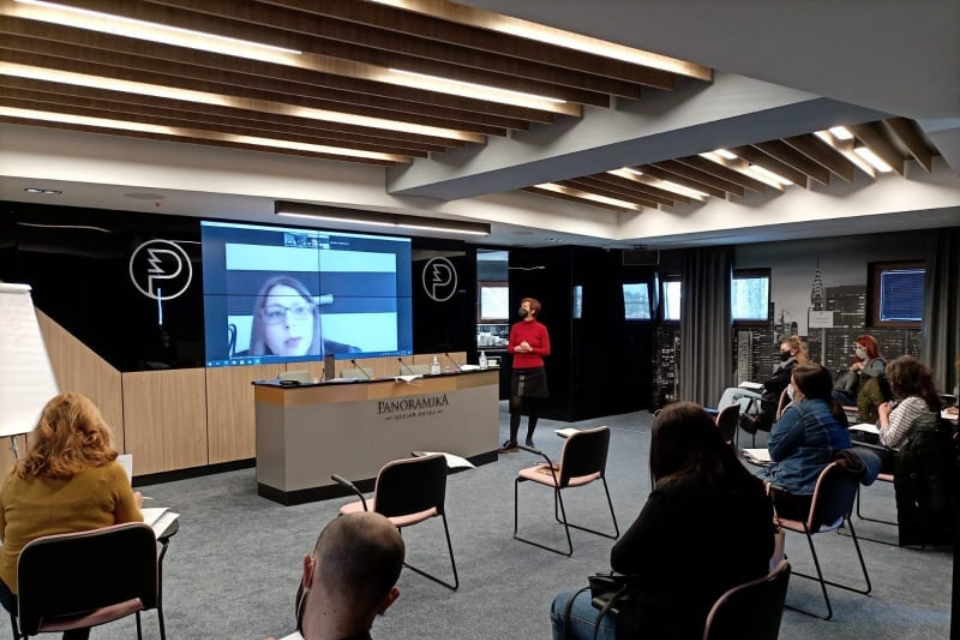 Journalists and media professionals from North Macedonia benefited from space for conversations on the topics of gender equality. Photo: Healthy Options Project Skopje

More than 40 media professionals from online, TV and radio institutions are more sensitized and determined to report on gender issues and violence against women in an impartial manner, as a result of a capacity building programme “Different discourse, better reality: Media in combating gender-based violence,” conducted from October 2020 to June 2021 by Healthy Options Project Skopje (HOPS) under the UN Women regional programme on ending violence against women “Implementing Norms, Changing Minds,” funded by the European Union.

The capacity building programme prompted a partnership between journalists, HOPS and other gender experts to cover topics on ending violence against women and women’s rights, as well as contributing to improving the knowledge of journalists by sharing the new Guidelines for gender-sensitive reporting in the media, produced by HOPS.

“Our intention was to create a space for learning together with the participants that can be used more broadly. This initiative proved that by building trust and partnership, we can lead the fight for gender equality and ending violence against women more efficiently. This is why, as a next step, we want to advocate for changes in the journalism codes of ethics to incorporate new gender equality provisions,” stated Elena Petrovska, project coordinator at HOPS.

Aleksandra Spaseska, a Skopje-based journalist at the online portal Kajgana.com and activist for almost 13 years, who participated in the capacity building programme, acknowledged that she only realized the complexity and nuances involved in gender-sensitive reporting after attending the training. “I personally feel better skilled and sensitized to approach, discuss and tackle different issues, from gender-based violence to topics regarding LGBTQ rights. The training helped me grasp the full landscape of what reporting on these issues entails, from research to story and, of course, the readers’ feedback. Women’s issues are human rights issues and gender-based violence is not a private matter. It is our job to convey the best version of the truth and be held accountable if we fail to do so,” pointed out the journalist.

Among the highlighted outcomes of the training were the discussions that took place, as well as the opportunities to share personal views on how the protection system for women who experience violence can be improved.

Katerina Dodevska, another journalist at the online portal mkd.mk who attended the capacity building programme, revealed that the shared experiences from the training have had a positive effect on the way journalists work. “Women who experience violence should see us as a source of support. The story we need to convey to the public is that violence should not be met with silence and must be prevented before it is too late. A story about domestic violence, if it is factual, can prevent and raise awareness about violence. It is up to us, as journalists, to drive change. We must work together to point out, improve, upgrade and change the laws. Only then will we be able to move forward,” said Katerina Dodevska.

Ana Avramoska Nushkova, legal adviser at the National Network to End Violence against Women and Domestic Violence and one of the trainers of the programme, mentioned that the media, as an influential actor in society, has the power to create and shape opinions and attitudes, as well as to change perceptions and condemn the use of stereotypes, prejudices, and discrimination in society.

“However, they can also create and transmit misconceptions and stereotypes, including those based on gender. According to legal regulations and the role they play in society, the media has an obligation to report responsibly on violence against women and domestic violence. Therefore, the media is expected to be educated and sensitized on reporting on gender issues and gender-based violence in an impartial manner, avoiding victimization and stigmatization of women subject to violence. The use of gender-sensitive vocabulary in media reporting allows people to see the differences between men's and women's needs, as well as to avoid preconceptions and misunderstandings regarding gender roles in society,” concluded the legal adviser.

The capacity building programme also included a mentorship programme, in which journalists were given support to craft gender-sensitive stories. As a result, although the programme only planned for six stories to be written, 15 journalists wanted to not just write the stories, but also to publish them in different types of media including digital, radio and TV.

Moreover, Elena Petrovska unveiled that, within the project implemented with the support of UN Women and funded by the European Union, HOPS also produced a document with recommendations for gender-sensitive reporting. “In partnership with the Council for Ethics in Media and the Macedonian Institute for Media, we will advocate for the meaningful adoption of these provisions and thus contribute to new standards in the ethics of media reporting. We must not neglect the fact that media and quality reporting play a crucial role in the democratization of the society, breaking negative stereotypes and prejudices and raising public awareness of women’s rights in society,” underscored Elena Petrovska.

Related News
18/06/2021
Take Five: “Social norms and ethical systems need to change to improve gender equality”
10/11/2021
From Where I Stand: “When we do not give up, when women support each other, we can always succeed” says Hive director
26/10/2021
MediaForShe Congress kicks-off a dialogue on gender equality with the media in Ukraine
19/10/2021
Turkish Women Olympians Make History
15/10/2021
Despite the pandemic, rural women in Kazakhstan launch their own businesses
END_OF_DOCUMENT_TOKEN_TO_BE_REPLACED