Take Five: “Stories are a powerful expression of our souls and crucial to creating human connections.” 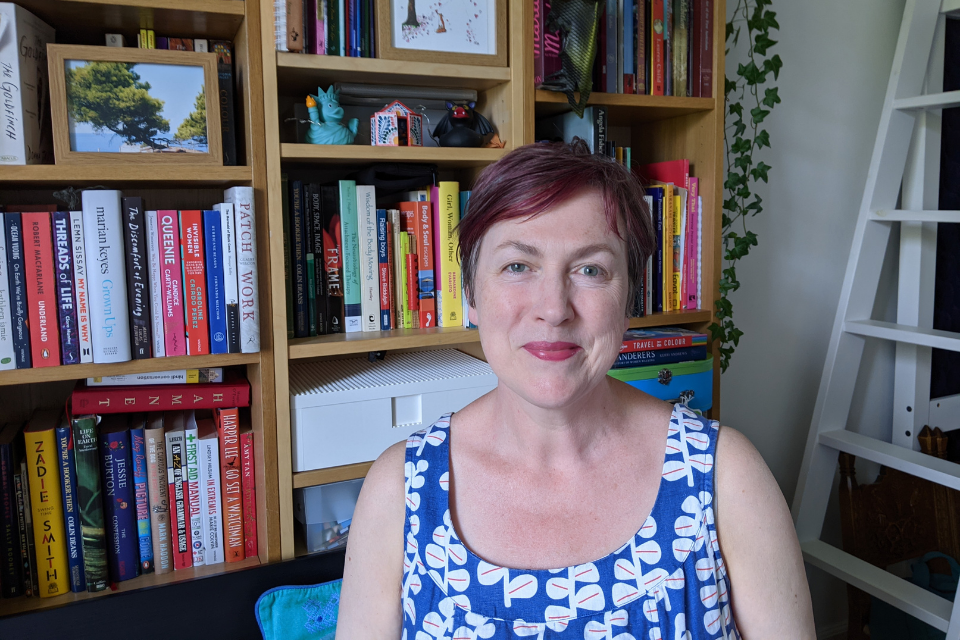 Louise Young is a writer, artist and upholder of children’s rights from Scotland. She is one of the writers that contributed to UN Women's Awake Not Sleeping: Reimagining fairy tales for a new generation" initiative. Over the past six years, she has worked with children, young people, and women who have experienced domestic abuse and heard them speak about the controlling tactics used by perpetrators. She hopes that readers of her fairy tales become more alert to ‘hidden in plain sight abuse’. And that they call it out and help shape a world where violence against children, women and men is no longer tolerated.

What excited you most about the ‘Awake Not Sleeping’ initiative?

I have always loved stories. I enjoyed writing as a child, but this is going to be my first published story since I was at school. This initiative gave me an opportunity to honour my creativity, which is so important to me.

It also ticks so many boxes for me, as a writer, an artist, and a mum. For the last six years, I've been working with children who are living with, or have lived with, domestic abuse. So, I was very keen to rewrite these traditional fairy tales wearing my gender spectacles. I specifically wanted to tackle the issue of coercive control. I always say that villains do not come wearing a monster mask; they actually look like normal people.

Do you have concerns with ‘classic’ fairy tales and how they may normalize gender inequality and harmful social norms?

We are introduced to fairy tales at a very young age. Then, when we re-read them as adults, we see them in a different light and re-think some of the roles and relationships. For example, why does the princess always have to wait for the prince to rescue her? Why are the women often portrayed as sinister, as evil stepmothers and the like?

There is a lot of threat and violence in these stories as well, which becomes normalized for children who are reading them and learning how to interpret them in the context of certain morality tales. When you look at all of that as an adult, you can better understand it, but it is quite dense for a young reader.

We say there are opportunities for everyone to succeed, but the truth is that we do not all start on a level playing field. Classically, women are seen as holding things together, who sacrifice their well-being, needs and creativity for others. How do we balance appreciating the nurturing side of women while empowering them to go out into the world to produce, create, and have the confidence to stand up and raise their voices without being seen as too emotional?

I want women’s skills to be valued. Girls and women often feel the need to play men at their own game in order to be seen as competent. But we have a lot of great capacity and skills of our own. How do we move beyond stereotypes of what success and power look like? That will benefit men too. It is so important for young boys and men to be encouraged to express sensitivity and not be afraid of being vulnerable. I have a young son and I have a lot of hope for his generation.

What change would you like to bring about with your story?

I want people to see how life is for children – to listen to them and treat them with respect. Do we shy away from what we are actually seeing? Can we look at a situation and call out when something is not okay?

I want to give children hope that things can change and do change. It might not be a massive turnaround, but eventually you can gravitate towards healthier choices. I was a very shy child myself and it took a long time to find my voice. Today, I am proud of my bravery and my ability to be authentic in this world, but these things have gotten easier as I get older. I like to cheer on children and hope they will learn how to find their own voice, build courage, and learn how to challenge things appropriately.

Stories are a powerful expression of our souls and crucial to creating human connections. Children should feel that they are not alone in this world. We need to help them transport themselves into a different reality if life feels too hard so they can explore new places, people and ideas.

What is the inspiration behind your fairy tale The Princes and the Peas?

I wanted to write in honour of the very brave children that I work with, who have gone through horrendous times. I wanted to tackle a few elements in my reimagined story, The Princes and the Peas. I wanted to explore the concept of male privilege and social justice. There is a character in my story who is based on a real politician who was embroiled in a sexual abuse case. Despite evidence and him essentially admitting to it, it was not seen as a crime by the courts. For women and children, we are often left with loose threads in society. Situations often feel incomplete and we are left with this feeling of not being able to have justice, which I wanted to explore. I wanted to address what is really important in life, what children need from their caregivers. There is a character who is quite privileged in my story and wants for nothing. But, at the end of the day, what we all need is love, respect and honesty.

Related News
17/03/2022
Famous Turkish actor Demet Evgar is announced as the first National Goodwill Ambassador of UN Women Turkey
15/03/2022
The Mountain Climber
28/12/2021
Non-Violence Summit and Creating a Violence-free World exhibition held give visibility to gender-based violence in Gaziantep, Turkey
16/12/2021
Famous Actor Kerem Bürsin became the first National HeForShe Advocate for Turkey
10/11/2021
From Where I Stand: “When we do not give up, when women support each other, we can always succeed” says Hive director
END_OF_DOCUMENT_TOKEN_TO_BE_REPLACED