Saving the lives of survivors of violence and their families 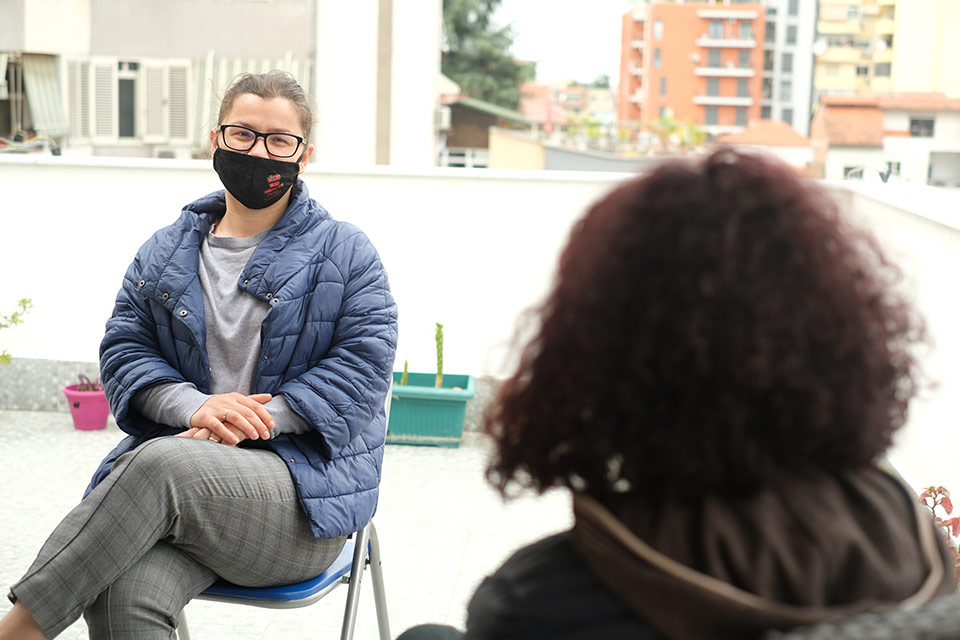 Ana Lila, head of the multidisciplinary team at Different and Equal talking to a survivor of violence.

Klodiana Mere* has more than 30 stitches on her head, the same number as the number of years she lived in terror of her life and the lives of her two children. She survived a deadly attack by her ex-husband four years ago but the agony did not end there.

Throughout her marriage her face was covered in bruises and everybody knew what she was being subjected to. Still, she was ashamed to walk out on her husband and apprehensive of a life as a single mother without a roof on her head and with zero support. “A tough woman, a real woman, is one who can deal with a difficult husband”, her mother used to tell her. “That is how we were raised; you had to marry once and you would be the one to blame if anything went wrong,” says Klodiana.

Klodiana still cannot believe that she and her children are safe now that her husband and their father is serving a prison sentence and they are beyond the reach of her ex-in-laws’ threats. “My children and I would be dead by now if it weren’t for these women. We owe our life to them,” says Klodiana, referring to the staff of Different and Equal, a women’s rights NGO that helped her find a safe place away from the threats of her ex-husband’s family.

“They have been like a mother, a father, a sister, a brother; they are everything to me”, Klodiana is lost for words to express her gratitude towards the organization that manages reintegration programmes for women survivors of violence and other vulnerable persons in Albania. Different and Equal helped her start a new life during the past year. They supported Klodiana and her children in every step of the way, providing medical and psychological counseling, rental assistance, food supplies and free legal services.

Different and Equal has been partnering with UN Women to assist women and their children and providing them with reintegration services as part of the UN Joint Programme on Ending Violence against Women and Girls in Albania. Klodiana and her children are among the 54 women and 130 children who were assisted by this programme, supported by the Government of Sweden, over the past year. Different and Equal operates in Tirana, Elbasan and Vlora and collaborates with the local authorities and two local NGOs in analyzing, adopting, and implementing new initiatives for the socio-economic integration of survivors of gender-based violence.

“A case manager is assigned to each case and a comprehensive assessment is conducted by a multidisciplinary team. We provide psychological counseling, free medical and legal assistance, food and personal hygiene parcels, employment-related advice and support, as well as support with housing and rental assistance”, says Stela Tanellari, Deputy Director and Reintegration Program Manager at Different and Equal.

“Reintegration of women and girls survivors of violence into the community and society is one of the most challenging issues in the fight against gender-based violence. Social norms according to which women must obey men coupled with their financial dependence, make it very difficult for women to leave violent relationships. Supporting the reintegration of women survivors of violence means empowering and providing them and their children with the opportunity to live a safer life. This is one of the most important components of the UN Joint Programme on Ending Violence Against Women in Albania”, says Alba Agolli, UN Women Project Manager. Among other things, the three-year programme is supporting the Government of Albania in complying with international standards in relation to violence against women and raising awareness and changing women’s attitudes towards their partners’ violent behavior. The programme is implemented jointly by UN Women, UNDP and UNFPA.

“Every day when I finish work, I find so many missed calls from the case managers working at the NGO. They are always looking out for me. I could never thank them enough,” says Klodiana, looking at Ana Lila, a case manager at Different and Equal.

“There has been a very close cooperation with the Municipality of Tirana, who have approved the full amount of rental subsidy for Klodiana and she will hopefully benefit from a soft loan afterwards,” says Ana Lila, head of the Survivors of Trafficking and Domestic Violence multidisciplinary team at Different and Equal.

Different and Equal has signed an agreement with the Municipality of Tirana and its local partner organizations have similar agreements in place with the Municipalities of Elbasan and Vlora, in order to better coordinate interventions and support these organizations in meeting the special needs of women survivors of violence. Work is currently under way to help increase the capacities of these local authorities in drafting socio-economic reintegration plans for survivors of gender-based violence.