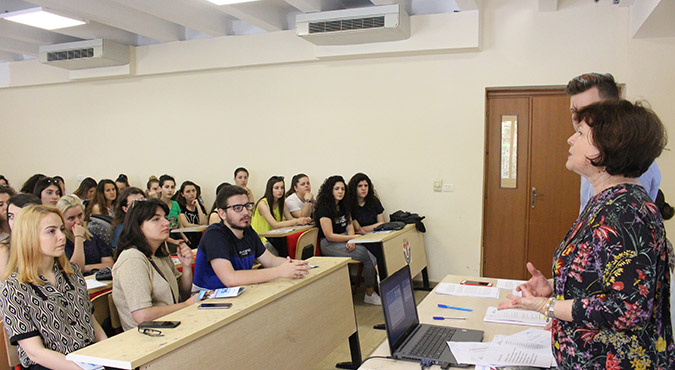 Bajana Ceveli of “Association of Women with Social Problems” with students of the Faculty of Law in Tirana, Albania. Photo: UN Women Albania

An awareness campaign to report the use of illegal fire weapons was organized in June in eight Albanian cities. Led by the civil society Coalition, 'Women, Peace and Security’, the campaign took place in different universities to raise awareness on security issues and the severe consequences of the circulation of illegal firearms. The increasing number of women killed with firearms in Albania signals that assault weapons are a major component of homicides in domestic conflicts. Nine women were killed in 2018 by firearms by intimate partners.

“We've noticed that 2019 started with femicides, committed by men using illegal weapons. This is a strong alarm for all of us. We must address the wide and uncontrolled presence of illegal weapons in our society”, said Rovena Balla, working for “Different and Equal” organization that is part of the Coalition, 'Women, Peace and Security’.

Albania suffered civil unrest in 1997, sparked by illegal Financial Pyramid Schemes, and with the opening of the weapons warehouses, almost all the population was armed. It is estimated that about two to three thousand illegal firearms are still in the hands of the citizens today, with almost all of them in men’s possession. Albania ranks as the country with the highest percentage (99 per cent) of weapons owned by men in the region.

The Coalition 'Women, Peace and Security’, led by the Association of Women with Social Problems comprises 32 civil society organizations and has reached out to more than 500 youths in seven universities in Tirana, Durres, Elbasan, Shkodra, Vlora, Korca and Saranda, including two high schools in Kukes. They raised awareness and urged them to be partners and active advocates in reducing the number of illegal weapons, which are perpetuating violence against women and contributing to losses of lives of women and girls. 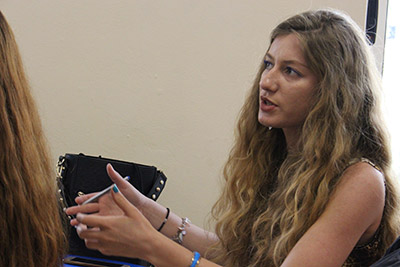 “All police structures should do more to involve youth because they are in the frontline and are more prone to be involved in all deviant behaviors”, said Alma Katragjini, Coordinator for Domestic Violence and Gender Equality at the Tirana Police Directorate. She highlighted that the information on domestic violence, drugs, road traffic ... etc. should be spread among youth. “Police, civil society and youth should be active actors and a bridge to prevent criminality and have a better society.”

Related News
06/02/2013
New law in Kyrgyzstan toughens penalties for bride kidnapping
21/04/2022
In the Words of Ayşegül Küçükafacan: “Thanks to the small grant by UN Women, I am stronger in combatting violence and abuse”
23/06/2021
Take five: “Data-driven initiatives are crucial to meeting women survivors’ needs in a world of limited resources”
08/06/2021
Saving the lives of survivors of violence and their families
20/04/2021
A new, first of its kind service provision has proved useful in protecting survivors in Albania
END_OF_DOCUMENT_TOKEN_TO_BE_REPLACED