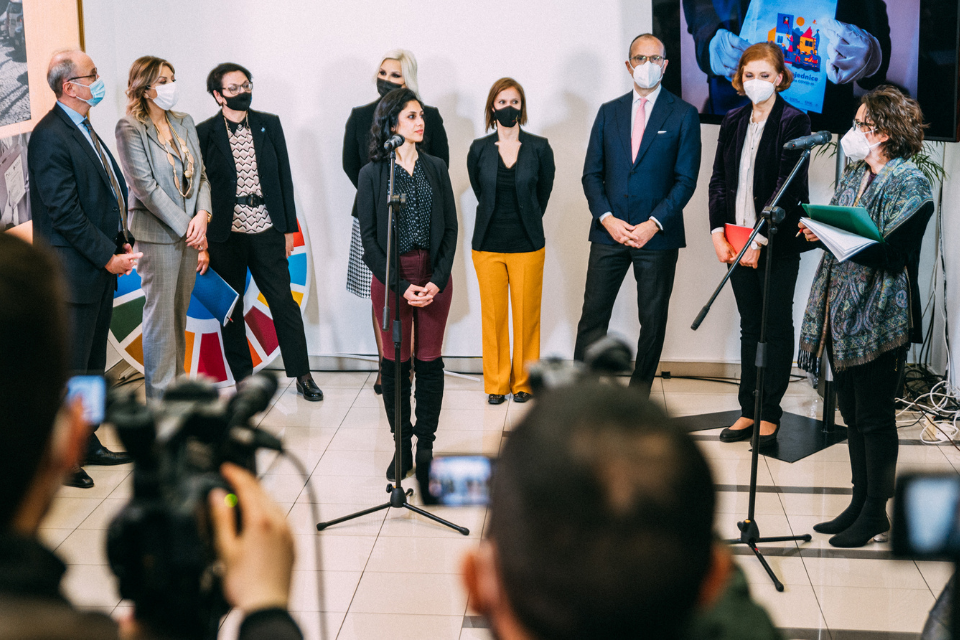 UN Women in Serbia together with the Coordination Body for Gender Equality in the Republic of Serbia, the Delegation of the European Union to Serbia, and Embassy of France in Serbia marked this year's International Women's Day - 8 March with an exhibition featuring female leaders. Photo: UN Women/Marija Piroski

Under the banner of ‘When the world stopped, they didn’t’, UN Women marked this year's International Women's Day with the opening of a powerful exhibition featuring the photos and audio stories of 10 women who stepped up during the COVID-19 crisis in Serbia. These women and their tireless efforts represent the many, many women and girls across the country whose efforts helped their families and communities to meet the challenges of the crisis.

The exhibition was made possible through partnerships with the Coordination Body for Gender Equality, the Ministry of European Union (EU) Integration, the Ministry for Human and Minority Rights and Social Dialogue, the EU Delegation to Serbia, and the Embassy of France.

"The day when the pandemic started was the longest in my entire life." This is how Sladjana Djokic, a nurse from Nis, in southern Serbia, describes the beginning of the fight against the coronavirus when they knew so little about it and had no adequate protection. She is among the 10 women heroes featured in the exhibition, which is on display at the French Institute in Belgrade. 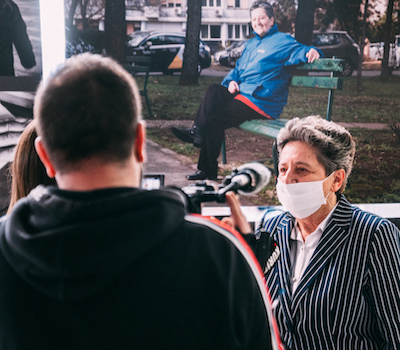 The exhibition features large-format artistic photographs of 10 Serbian women who contributed to better the society during the COVID-19 pandemic. Photo: UN Women/Marija Piroski

This year’s International Women’s Day celebrates the tremendous efforts made by women and girls throughout Serbia during the COVID-19 pandemic. It features large-format artistic photographs of 10 women leaders, from all walks of life (including nurses, teachers, pharmacists and cashiers), who have led by example and helped improve people’s lives and wider society during the COVID-19 pandemic. Each woman’s photograph is accompanied by an audio story about her experience and work during the pandemic.

According to Milana Rikanovic, Head of UN Women in Serbia, the exhibition is aimed at symbolically recognizing everything that women have done for the nation through their professional and personal commitment during a very difficult time. “They are true heroines of our time and leaders of the struggle for gender equality," Rikanovic said.

The exhibit was opened on 8 March by several high-level government representatives including the Deputy Prime Minister, the EU Integration Minister, and the Minister for Human and Minority Rights. Also attending the opening were the Head of the EU Delegation to Serbia, the Head of UN Women and the French Ambassador. One of the women featured at the exhibition was also at the event. 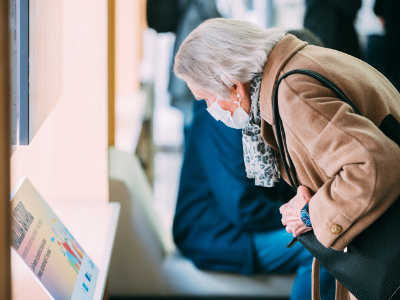 UN Women in Serbia exhibition "When the world stopped, they didn't" will continue touring across the country. Photo: UN Women/Marija Piroski

In her welcome address, Zorana Mihajlovic, the Deputy Prime Minister and the President of the Coordination Body for Gender Equality, said that last year was challenging, with women making up the majority of those on the frontlines. "The faces in this exhibition represent the faces of all women in our country," she said.

His Excellency, Sem Fabrizi, the Head of the EU Delegation, said that we should also realize that – among the many challenges COVID has brought – gender equality has been under additional pressure, socially and economically on a global scale. “2021 celebrations should therefore be based on recognizing women’s role and continuing to fight for gender equality,” he added.

The multi-media exhibition will remain on display at the French Institute until 15 April. It will then tour across Serbia. Sandra and Igor Mandic created the exhibition.

Related News
18/10/2021
Op-ed: What does energy poverty mean for women?
14/10/2021
Take Five: "Gender-responsive planning is a crucial success factor for improving the situation of rural women"
11/10/2021
In Serbia, girls are busting gender stereotypes in tech with their innovative ideas
25/08/2021
In the words of Jelena Mladenović: “The hardest part is to realize what could, in my article, benefit the victim and what could possibly harm her”
09/08/2021
Social service "Octopus" yields heartwarming response in Serbia
END_OF_DOCUMENT_TOKEN_TO_BE_REPLACED