A premiere in Moldova – eight Fathers’ Clubs to be established in Straseni and Falesti, with the assistance of the European Union 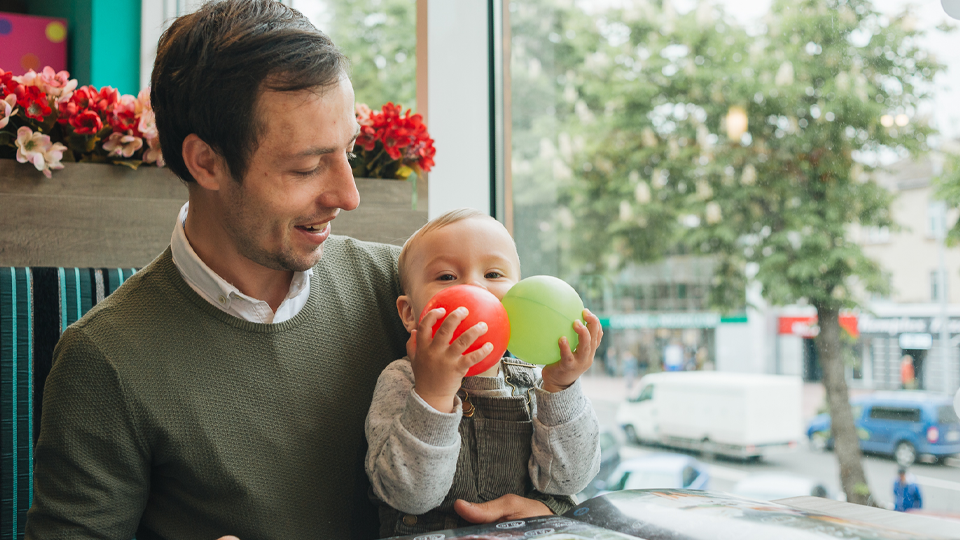 Vasile Cucu, 28-years-old, is part of a new generation of fathers who are actively involved in caring for their children in the Republic of Moldova. Photo: UNFPA Moldova/Dan Guțu

Eight pilot clubs dedicated to supporting men and the equal sharing of household and family responsibilities are to be established in the districts of Straseni and Falesti in the next two years under the "EU 4 Gender Equality: Together Against Gender Stereotypes and Gender-Based Violence" programme, funded by the European Union and implemented by UN Women and UNFPA.

The fathers’ club is supposed to be a place where current and future fathers could find support and resources enabling them to participate actively in child rearing and in activities traditionally regarded as female-dominated. The clubs’ activities would be led by professionals in family-friendly policies, bridging EU experience with Moldovan realities, and sharing good fatherhood advocacy practices.

"The European Union supports equal opportunities for women and men. The pilot program 'Father's Club' is a concrete example in this regard and we hope that we will soon replicate this initiative at national level in the country. Especially during these challenging times for all of us, contributing to the development and consolidation of such values is key towards having a strong society," said Magdalena Mueller-Uri, Head of Cooperation at the EU Delegation to the Republic of Moldova.

"Research shows that a very small share of men participate on a daily basis in child rearing. This is something mothers are in charge of most of the time. The goal we have in mind is for the fathers’ clubs to encourage fathers and fathers-to-be to engage actively in child rearing and in household chores," Violeta Terguta, "EU 4 Gender Equality: Together Against Gender Stereotypes and Gender-Based Violence" Programme Coordinator, added.

The first activity involving the formation of Fathers’ Clubs in Moldova was organized recently by the UNFPA Implementing Partner, Child Rights Information and Documentation Centre, in Straseni and Falesti. More than 80 fathers and fathers-to-be from these districts engaged in focus-group discussions in which they were consulted on this initiative.

Eugen Oprea – a father of two from Straseni – was delighted about this idea and said that when he became a father, he had vowed that he would participate actively in raising his children. "I believe it is imperative that children feel the involvement of both their mother and their father. In the beginning, some fathers had a peculiar attitude towards me. However, I did not care about it. I cared about my family and my children. I am glad to see now that more and more fathers are getting involved," Eugen said.

Liviu, another father from Straseni, recounted that there are many fathers out there who would like to engage more, but don’t know how to do it. Therefore, the idea of setting up a Fathers’ Club to help fathers in this regard is welcome.  "As fathers, we have a lot of questions. We actually need to learn more. Some of us feel embarrassed about tackling certain topics. My expectation from this club is to learn about good child-rearing practices and to talk to professionals in this area," Liviu said.

Rules and methodologies, the regulation on the organisation and operation of Fathers’ Clubs and their work plans will be developed following focus group discussions, consultations with LPA representatives, local partners, as well as on the basis of a resource analysis carried out by the UNFPA Regional Office with regards to father engagement programs.

The "EU 4 Gender Equality: Together Against Gender Stereotypes and Gender-Based Violence" programme supports gender equality, tackles perceptions about the roles of men and women in the family and in the society, and is meant to contribute to eliminating gender-based violence.

Supported by the EU, the two UN agencies – UN Women and UNFPA – will collaborate with governmental institutions and civil society partners from six countries with a focus on breaking gender stereotypes, enhancing the engagement of men in household chores and child rearing, and on carrying out activities with potential perpetrators to prevent gender-based violence.