Press Release: High-level event in North Macedonia brings the role of women in the security sector to the fore

UN Women, St. Kliment Ohridski University in Bitola and the Faculty for Security in Skopje joined forces to organize a high-level discussion on best practices for promoting the greater participation of women in North Macedonia's security sector. 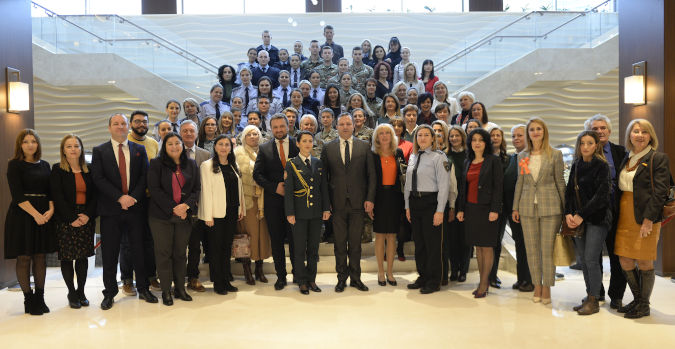 More than 90 officials and representatives from the UN as well as civil society came together to discuss the role of women in the security sector. Photo: Ministry of Interior, North Macedonia

(Skopje, 14 December 2019) – More than 90 officials and representatives from the UN as well as civil society recently came together to discuss and develop recommendations for promoting the greater participation of women in North Macedonia’s security sector. This event was the first in a series also aimed at raising awareness on the UN Security Council Resolution 1325, which calls for the greater participation of women and their perspectives in peace and security efforts.

The high-level forum on Gender Perspective and the Role of Women in the Security System Reforms included the Minister of Interior and the UN Resident Coordinator. Participants learned about the critical importance of women’s meaningful participation in the security sector for achieving gender-sensitive policies, inclusiveness and the fair distribution of power. Achievements and challenges that women face in North Macedonia were discussed alongside best practices for women’s participation in defence, police, fire-fighting units, customs and other security sector professions.

“Over the years, a series of normative changes and decisions were made to create the basis for making significant steps in mainstreaming the gender perspective in the security sector,” said Vice Premier and Minister of Interior, Mr Oliver Spasovski. “Greater space for women’s participation in all institutional structures, policies and decision-making, was provided. The situation changed in terms of women’s participation as an equal actor in all areas of the society,” he said.

The Vice-Rector of the St. Kliment Ohridski University from Bitola, Mr Marjan Gjurovski, also spoke, focusing on the importance of raising awareness for the position of women in the security sector. “We should work harder for greater inclusion of the gender perspective in public policies, including the policies for national security and improve the legislation to address issues women and men face, in all spheres where discrimination prevails. We should have zero tolerance for any form of sexist behavior,” he said. 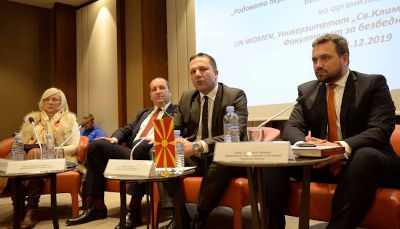 The Dean of the Faculty for Security in Skopje, Mr Nikola Dujovski, noted that there is a positive trend of balanced gender representation among the students enrolled, accenting the positive effects of gender-sensitive policies enforced by the Faculty.

“From the adoption of the Beijing Declaration and Platform for Action, the Republic of North Macedonia made significant progress in advancing the gender equality agenda. Security sector reform is prioritized by governments and is set on the peace and security development agenda by the international community. No one should be left behind in this process, women, as well as men, have to take their space and have employment opportunities and be vocal in their decisions,” noted Ms Rossana Dudziak, UN Resident Coordinator in North Macedonia.

Ms Vesna Ivanovikj-Castared, Head of the UN Women office in North Macedonia, talked about the importance of having equal opportunities for women and man in choosing their vocation. “Can a woman do a security sector job as well as a man? The answer is simple – this is not a contest! Women have the right to choose their own profession based on their aspirations, professional background and skills – and there are no men’s and women’s jobs,” said Ms Ivanovikj-Castared.

Event participants concluded by developing key recommendations ahead of the upcoming 20th anniversary of the UNSCR 1325. The recommendations covered promoting women’s participation in the judiciary, the Army and defence, as well as in the Parliamentary oversight of the security system.

Related News
18/06/2021
Take Five: “Social norms and ethical systems need to change to improve gender equality”
29/11/2019
International Conference in Skopje calls for greater recognition of women’s powerful peace-building role in the Western Balkans
11/10/2019
Ask an activist: What is your message to the new generation of women and men activists?
01/02/2018
Press Release: Local women need voice for regional and international peace to hold
18/12/2017
Women leaders at the forefront of peace building in the Western Balkans
END_OF_DOCUMENT_TOKEN_TO_BE_REPLACED