UN Women in Turkey draws attention to violence against women and girls in public spaces with the “Light the Dark” campaign during 16 Days of Activism. UN Women calls everyone to mark the places where they feel unsafe with a firefly on a Turkey map at atesbocekleri.info. 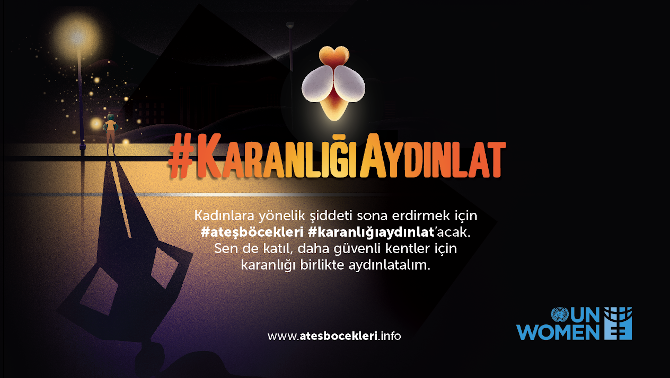 Light the Dark is a national campaign to draw attention to safety of women and girls in public spaces in Turkey.

(Ankara, 25 November) – The 16 Days of Activism against Gender-Based Violence is an international campaign that kicks off on 25 November, the International Day for the Elimination of Violence against Women, and runs until 10 December, Human Rights Day. To kick off the campaign this year, UN Women Turkey is launching a national “Light the Dark” campaign to draw attention to safety of women and girls in public spaces.

Fireflies light the dark when they feel unsafe

The “Light the Dark” campaign aims to end violence against women in public spaces and contribute to create safer cities and violence free public spaces. The inspiration of the campaign is fireflies, which communicate with and protect one another with their blinking lights. The campaign calls for actions by all citizens, local authorities and public institutions, to make cities and public spaces safe, healthy, inclusive and secure environments for everyone to live and participate in urban life without fear of violence and intimidation. Using fireflies that light the dark as its logo, the campaign invites everyone to visit the website atesbocekleri.info and mark those spaces where they feel unsafe. The participants can also share their personal experience by leaving their comments.

Women and men live in the same city but experience public spaces differently. Women and girls all over the world are exposed to verbal, sexual, physical, economic, psychological harassment and other forms of violence in public spaces (on the streets, at work, or social places) - when they are walking on the streets, running errands, using public transport or using public facilities. Violence has a negative impact on their access to social activities, education, employment and leadership opportunities, as well as their health and well-being. A life free from violence is one of the prerequisites for gender equality and the empowerment of women and girls.

During 16 Days of Activism, UN Women calls for support and engagement in the campaign by using the hashtags in Turkish #ateşböcekleri and #karanlığıaydınlat and aim to mobilize everyone to make the spaces that we live safer.

Related News
28/12/2021
Non-Violence Summit and Creating a Violence-free World exhibition held give visibility to gender-based violence in Gaziantep, Turkey
04/05/2020
Amid COVID-19 lockdown in Turkey, UN Women runs campaign to curb violence against women and promote gender equality at home
26/11/2015
Istanbul goes orange
25/11/2015
Orange the World to End Violence against Women
21/04/2022
In the Words of Ayşegül Küçükafacan: “Thanks to the small grant by UN Women, I am stronger in combatting violence and abuse”
END_OF_DOCUMENT_TOKEN_TO_BE_REPLACED