A summit on gender-based violence was held on 26 November 2021, during the 16 Days of Activism. The event was followed by the ‘Creating a Violence-free World’ exhibition, which was co-created by refugee women and professional artists during an art workshop. Organized by the UN Women Turkey Refugee Response Programme in partnership with the Gaziantep Metropolitan Municipality and with the financial support of the Government of Japan and Norway, the event gathered refugee and local women, government authorities and civil society organizations that are operating in the fields of migration and gender equality. 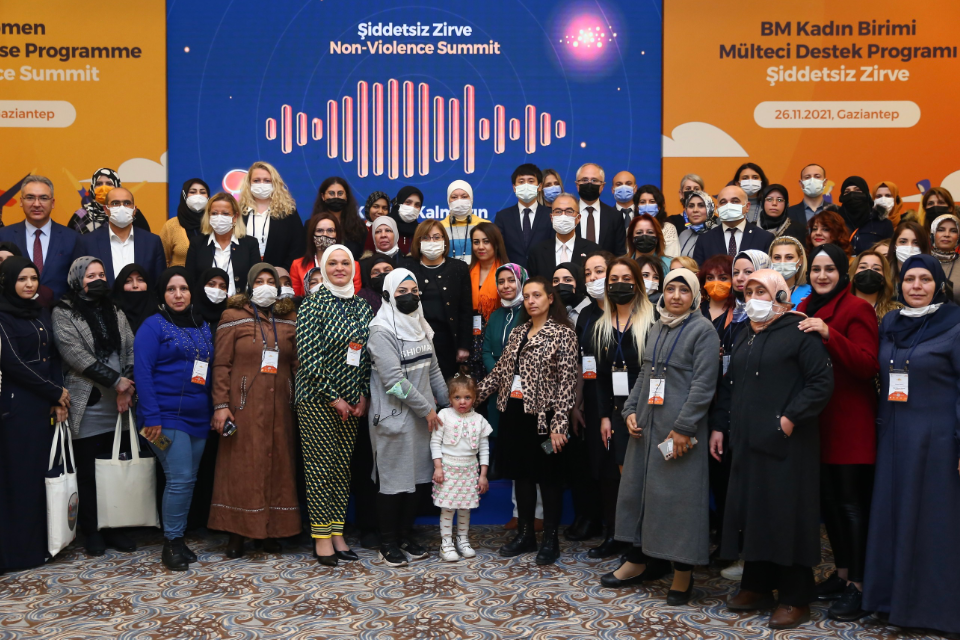 26 November, Gaziantep — Calling attention to gender-based violence in all forms towards refugee and local women and girls, the Non-Violence Summit featured the attendance of the Mayor of the Gaziantep Metropolitan Municipality, the Ambassador of Japan to Turkey, the Counsellor and Special Advisor on Integration from the Norwegian Embassy, and UN Women Turkey’s Country Director.

“The Non-Violence Summit is being held at the right place and time thanks to UN Women,” stated Suzuki Kazuhiro, Ambassador of Japan to Turkey. “It is the right place because out of the 3.6 million Syrian refugees in Turkey, 70 per cent are women and children who are vulnerable to gender-based violence and domestic violence. And today 22 per cent of Gaziantep’s population are Syrian refugees. It is the right time because the ongoing COVID-19 pandemic has created persisting impacts on our economy and society, which means gender disparity in all aspects have further deteriorated. All these stresses have increased gender-based and domestic violence; therefore, there is no other time than now to start our action to formulate comprehensive counter measures.”

Prior to the Summit, an art workshop on the forms and effects of violence was implemented with a group of refugee women on 18–19 October 2021. During the workshop, campaign messages against gender-based violence were formed based on the unique opinions and exchanges between participating women to end violence. Art works were also created in collaboration with professional artists, which were featured at the ‘Creating a Violence-free World’ exhibition, which opened during the Summit.

Through collaboration with key civil society organizations such as the Association for Solidarity with Asylum-Seekers and Migrants (SGDD-ASAM), Refugee Support Centre (MUDEM-RSC), Foundation for the Support of Women’s Work (KEDV) and Reach Alternatives (REALS), an interactive dialogue was held on violence against women, with the attendance of beneficiaries from UN Women-supported centres. During the dialogue, refugee and local women drafted their own manifestos by exchanging views on the causes of gender-based violence, protection and prevention mechanisms and similar issues.

The results of the dialogue were shared with local public institutions, CSOs and all the relevant stakeholders at the Summit, who made the following statements in response:

“The event today gives us a unique opportunity to meet with Turkish and Syrian leader women, in order to hear their perspectives and deepen our collaboration among different partners in order to improve the quality of our interventions and support mechanisms on combating against violence against women and girls,” stated Merete Munch, Counsellor and Special Advisor on Integration from the Norwegian Embassy. “Although we still have some way to go to achieve equality between women and men and to eradicate violence against women and girls, as I said, change is possible if each and every one of us commits and works together, hand-in-hand. Norway supports efforts that seek to increase the opportunities available to women and girls, promote their right to self-determination, further their empowerment. This is crucial in order for girls, boys, women and men to have equal rights and opportunities.”

“Violence against women is a public health problem and a violation of human rights,” expressed Fatma Şahin, Mayor of the Gaziantep Metropolitan Municipality. “Of course, it is very important to strengthen, protect and rehabilitate women, but this issue must be worked on from both sides. We need to understand why men resort to violence by working on the male perspective as well. Considering that half of the refugees who migrated to Gaziantep from their homeland are women, we can say that we host over 200,000 female residents in our country in Gaziantep. Therefore, the issue of violence against women, which is very important for the whole world, is also an important topic for our country and our city. In this context, we are pleased to work with UN Women due to their cooperation in many projects and studies on women’s empowerment.”

The summit and exhibition were organized as part of the 16 Days of Activism against Gender-Based Violence campaign, which takes place yearly between 25 November and 10 December.

“Violence against women is widespread, but it is not inevitable; change is possible,” concluded UN Women Turkey Country Director Asya Varbanova. “Stopping this violence starts with believing survivors, adopting comprehensive and inclusive approaches that tackle the root causes, transform harmful social norms, and empower women and girls. It includes survivor-centred essential services across policing, justice, health, and social sectors, which are accessible to all women and girls, including the most vulnerable. It also requires listening to women themselves and understanding their situations, needs, and priorities.”

Related News
04/05/2020
Amid COVID-19 lockdown in Turkey, UN Women runs campaign to curb violence against women and promote gender equality at home
19/01/2023
A new safe space for women opens its doors in Istanbul
28/12/2022
Unstereotype Alliance Türkiye celebrates third anniversary promoting gender equality in advertising
09/12/2022
Türkiye says NO to intimate partner violence with #SheSaidNo campaign
21/04/2022
In the Words of Ayşegül Küçükafacan: “Thanks to the small grant by UN Women, I am stronger in combatting violence and abuse”
END_OF_DOCUMENT_TOKEN_TO_BE_REPLACED