Report on discrimination and violence against Roma women in the Balkans reveals devastating statistics, calls for urgent action 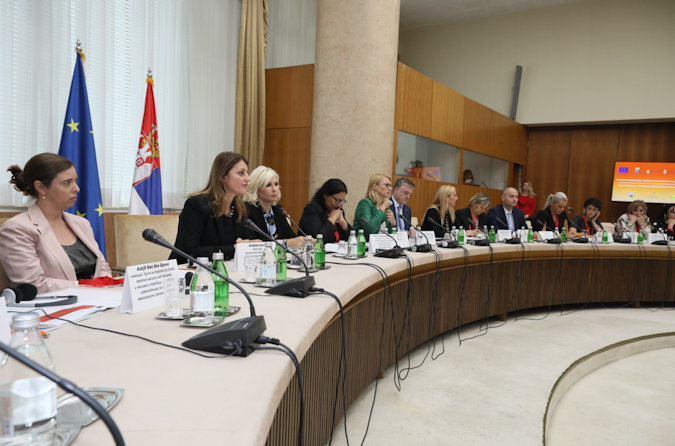 On 19 September, the Roma Women Center BIBIJA officially presented the Regional report on discrimination of Roma women in the area of healthcare, child marriages and support and protection in cases of domestic violence in Belgrade. The report is based on survey data collected in Bosnia and Herzegovina, Montenegro, North Macedonia and Serbia, and the results are staggering.

In Serbia, as many as 92% of Roma women have experienced some type of physical or sexual violence since the age of 18.

Although early and forced marriage is a clear violation of the law, in 2014, out of 108 cases reported in Serbia, the perpetrator was sentenced to jail in only 13 cases, while in 56 he was placed on probation. The mild response is indicative of a widespread and troubling attitude of disinterest by the authorities and society in general, the report concludes.

The launch of the report served as an opportunity for government and civil society representatives from across the region to gather and examine this common concern as well as to review the recommendations offered by the Roma women who wrote and contributed to the report.

The presentation of the report was opened by Blerta Cela, Deputy Regional Director of the UN Women Europe and Central Asia Regional Office. "The report confirms that the problems faced by Roma women are shared throughout the region," Ms. Cela said. "I hope that the recommendations of the report will translate into concrete actions to make a difference in the lives of Roma women and girls and communities."

Deputy Prime Minister and Head of the Coordination Body on Gender Equality in the Republic of Serbia, Zorana Mihajlovic, noted that changes to the Family Law are pending and should address the problem of early and forced marriage. Ms. Mihajlovic also stressed that we must change our attitude as a society and that the problems of Roma women should no longer simply be ascribed to Roma tradition and dismissed as such, Mihajlovic said.

Head of the Council of Europe Office in Serbia, Tobias Flesenkemper highlighted the responsibility of states to address violence and discrimination. “The Istanbul Convention recognizes violence against women as a violation of human rights and a form of discrimination, which means that states are responsible if they do not respond adequately to such violence,” he stated.

“Roma are the biggest ethnic minority in Europe and they are the most discriminated against,” said Mateja Norčič Štamcar, Deputy Head of the EU Delegation to the Republic of Serbia. Ms. Štamcar emphasized that the issue of Roma safety and non-discrimination is of high importance to EU member countries, both internally and in terms of EU expansion.

Ruth Steward, Australian Ambassador to Serbia, advocated for an approach that encompasses a wide-reaching and comprehensive discussion as a way of finding effective solutions. “In Australia, one of the most diverse nations in the world, the efforts to combat violence against women are tailored to recognize this diversity,” she noted.

The Regional Report is a product of the project “Unifying the Voices for Ending Violence against Women,” implemented by Roma Women Center BIBIJA from Belgrade, Serbia, in partnership with Citizens' Association for the Promotion of Roma Education "Otaharin" from Bijeljina, Bosnia and Herzegovina; NGO “Young Roma" from Herceg Novi, Montenegro; and Roma Women and Youth Association “Luludi" from Skopje, North Macedonia, under the framework of the EU-UN Women regional programme “Ending violence against women in the Western Balkans and Turkey: Implementing Norms, Changing Minds,” funded by the European Union.