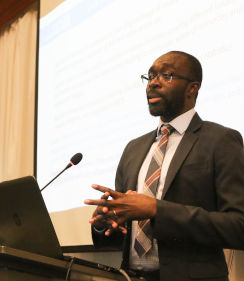 Papa Seck is the Chief Statistician at UN Women. He has led statistics and data work at UN Women since joining the organization in 2009. He manages UN Women's Making Every Woman and Girl Count flagship program that aims at the improvement of the production and use of gender data and helping countries to systematically monitor progress towards the achievement of the Sustainable Development Goals from a gender perspective.

Without gender statistics, we cannot measure and monitor where we are. For the protection of human rights, for protection of the rights of women and girls, we need that. Also, beyond just monitoring where we are, we need to have the necessary information to advise governments on actions they need to take. And, evidence-based actions will allow us to allocate resources where they are needed most. We need to allocate resources efficiently so that we jointly achieve progress that women and girls want and deserve.

There are big differences between gender statistics and sex-disaggregated data. Gender statistics encompasses data that talk about the lived reality of women and men and sex-disaggregated data is part of that – but it is not the whole picture. Let me give you an example, maternal mortality indicators – this is not an indicator that you can disaggregate by sex, but obviously, maternal mortality tells you a lot about the conditions of women, their health and equal access to healthcare. So, that will be considered as ‘gender-sensitive’ indicator, but not necessarily an indicator that can be disaggregated by sex. There are quite a lot of those indicators. And, more importantly, now when we are talking about the principle ‘leaving no one behind’, we need to start looking at differences between women. Again, it is another area of gender statistics, where essentially you look at inequality issues, not necessarily disaggregation by sex. You disaggregate by different characteristics, such as age, location, race, ethnicity, social-economic status, poverty, etc.

As global experience shows, we have challenges: for instance, in line ministries, where people who are responsible for statistics may sometimes not necessarily know what gender equality is, or how to produce gender equality indicators. Another challenge is that governments are sometimes unwilling to put resources into conducting gender related statistical surveys, and that needs to change. Improving domestic funding for gender statistics is undoubtedly important.

That’s why, since 2016, the global UN Women program: Making Every Woman and Girl Count engaged with selected UN member states around the improvement of the planning and coordination of gender statistics. This program is implemented in about 15 countries around the world with support from the six UN Women regional offices, including the Regional Office for Europe and Central Asia. The aim of the program is to support countries to upgrade how they plan and coordinate gender statistics and how they improve the production of data. The program also supports countries to improve administrative records as well as to conduct training, and to ensure data is disseminated and users have the tools necessary to acces and use the data, including issues related to gender literacy.

Agenda 2030 saw the UN member states commit to achieving the 17 Sustainable Development Goals (SDGs) and their 169 targets. These targets are accompanied by 244 indicators that need to be monitored. For gender equality and the empowerment of women and girls, we have sustainable development goal five, which has about nine targets. Gender is also an integral part of the other Goals, those focusing on poverty, hunger, health, education, water and sanitation and so on. So, gender indicators are essential to monitor where we are not only from the SDG 5 perspective but also across all the SDGs. In 2018, UN Women published a report on the Sustainable Development Goals entitled: Turning Promises Into Action. This report identified a total of 54 indicators that were especially relevant to track progress of all 17 SDGs from a gender perspective and these indicators are essential to tell us where we are and where we need to be in terms of gender equality.