Press Release: The Parliament of Albania and UN Women commit to greater collaboration for gender equality 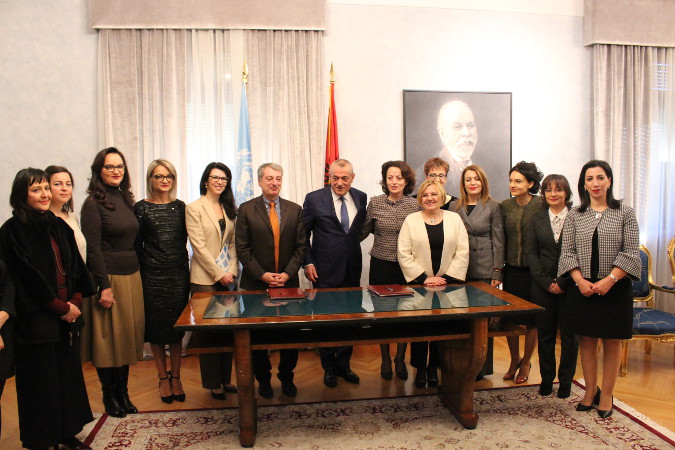 UN Women and the Parliament of Albania signed a Memorandum of understanding. Photo: UN Women Albania

Earlier today, UN Women and the Parliament in Albania signed a Memorandum of Understanding to strengthen their joint work on gender equality and women’s empowerment in the country. The memorandum builds on existing cooperation between the two institutions and will focus on implementing national and international commitments on gender equality and ending violence against women.

During the signing ceremony, the Speaker of Parliament, Gramoz Ruçi, highlighted that women in Albania have made significant strides in political representation, but their engagement can and should be greater. "Gender equality and women’s empowerment are not just women's issues, they concern the whole society. The time is now for Albanian society to stop addressing political, economic, social and decision-making issues as men's issues," Mr. Ruçi said. 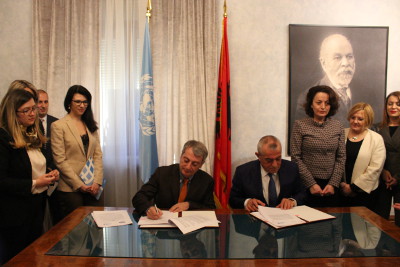 UN Women Representative in Albania, Giuseppe Belsito and Speaker of Parliament of Albania, Gramoz Ruçi, signing the Memorandum of understanding in the presence of women members of parliament and women councilor. (left to right). Photo: UN Women Albania

The UN Women Representative in Albania, Giuseppe Belsito said: “Albania is a model for the entire region when it comes to women’s participation in politics. This is also confirmed by your personal commitment. By working together with the Parliament, we can achieve greater results and have an impact in women’s and girl’s lives”.

Albania reached a new milestone during the 2017 national elections, with 28 per cent of parliamentarians voted in being women. UN Women has been supporting the Alliance of Women MPs, which convenes women parliamentarians across party lines to collaborate on relevant issues.

As part of the memorandum signed today, the two parties agree to work on promoting the implementation of different international and national commitments, aiming to achieve a country where women and men have equal opportunities and are free from violence and discrimination. Also, significant support will be given to the Alliance of Women Parliamentarians and the ‘Gender Equality and the Prevention of Violence against Women’ parliamentary sub-commission.

Meanwhile, a year ago, the Albanian Parliament adopted a resolution on the Sustainable Development Goals, committing to fulfill the promise of the 2030 Agenda to “leave no one behind”, particularly with regard to vulnerable groups. Promoting the achievement of the Sustainable Development Goals, the core of Agenda 2030, is also a key point of collaboration under the new memorandum.

Related News
08/03/2021
Women leaders in the Western Balkans and Turkey confront violence against women amid the pandemic
04/09/2020
In the words of Esmeralda Hoxha: “Without trust in institutions, survivors get entrapped in a vicious cycle of violence”
16/03/2020
International Women's Day around Europe and Central Asia
03/10/2019
North Macedonia hosts third sub-regional consultation on 25 years of commitments to gender equality
25/07/2019
From where I stand: “Women in rural areas are speaking up about their rights”
END_OF_DOCUMENT_TOKEN_TO_BE_REPLACED