Convened by the Government of the former Yugoslav Republic of Macedonia, UN Women, the European Union, and the Council of Europe (CoE), in partnership with European Women’s Lobby, the regional forum reviewed progress in fulfillment of the Council of Europe Convention on preventing and combating violence against women and domestic violence, known as the Istanbul Convention. The forum took place within the framework of the EU-UN Women regional programme “Implementing Norms, Changing Minds". 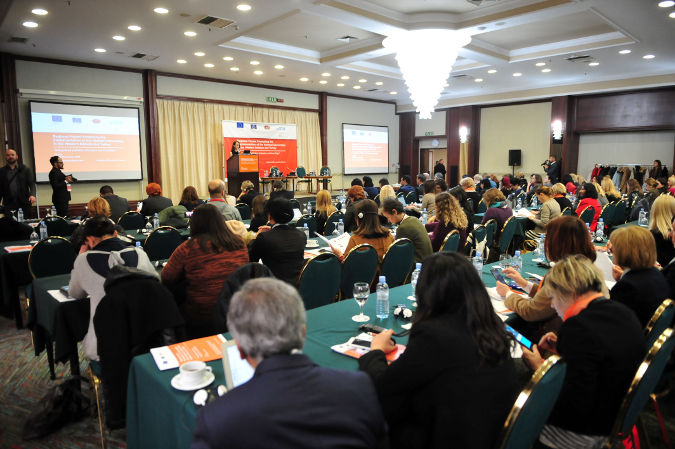 Regional forum: Promoting the implementation of the Istanbul Convention in the Western Balkans and Turkey. Photo: UN Women/Darko Andonovski

The Government of the former Yugoslav Republic (fYR) of Macedonia, UN Women Regional Office for Europe and Central Asia, the European Union, and the Council of Europe (CoE), in partnership with European Women’s Lobby, convened a regional forum to discuss the progress in implementation of the Council of Europe Convention on preventing and combating violence against women and domestic violence, known as the Istanbul Convention, within the broader commitments on gender equality and ending violence against women in the Western Balkans and Turkey. The forum aimed to accelerate implementation and facilitate dialogue among key stakeholders across the region.

The forum was organized within the framework of the EU-UN Women Regional Programme on Ending Violence against Women in the Western Balkans and Turkey: Implementing Norms, Changing Minds.

Taking place in Skopje, the capital of fYR Macedonia, on 27 and 28 November, the event brought together European Commission, EU Delegations and UN representatives, governments, civil society and regional institutions from the Western Balkans and Turkey to discuss the implementation of the Convention on the Elimination of All Forms of Discrimination against Women (CEDAW) and the Istanbul Convention, so as to push this agenda forward by developing concrete proposals for action at national and regional levels.

“My personal aspiration is zero tolerance and I expect the same from each of my associates, and the whole system of institutions. I consider the cooperation with the civil society and the support from the strong women's organisations as crucial in creating better laws and policies regarding gender violence. I want to devote the same level of enthusiasm and energy to the male world, but the starting red line for these issues is the consensual understanding that harassment or violence in any form, towards women and girls, is NOT attractive, is NOT masculine or manly, and is NOT acceptable,” said H.E. Zoran Zaev, Prime Minister of the former Yugoslav Republic of Macedonia.

“Violence against women and girls is preventable. Several strategies are already showing success. They include engaging men and boys and changing the stereotypes within households and communities. Working with both young boys and girls is a “best bet” for faster, sustained progress on eradicating gender-based violence,” said H.E. Samuel Žbogar, Head of the Delegation of the European Union.

“The need to create and nurture partnerships in order to put an end to violence against women is enshrined in the Istanbul Convention. When they join forces, law enforcement agencies, the judiciary, civil society organizations, service providers, health services, child protection agencies and other relevant partners can achieve better results and provide a safety net for victims and survivors,” said Daniele Cangemi, Head of the Human Dignity and Gender Equality Department of the Council of Europe.

“Women’s civil society organizations are the people on the ground; helping survivors, collecting the data and dedicating themselves to improving the lives of all women and girls. These organizations are your partners, and together more can be done to eradicate violence against women and girls. We urge our institutional partners, regional and national, to hear the voices of women from across the Western Balkans and Turkey today; foster partnerships, foster relationships and let’s work together to eradicate violence against women and girls,” said Asha Allen, Policy and Campaigns Officer of the European Women’s Lobby.

“The Government has adopted an Action Plan for the implementation of the Istanbul Convention in the period of 2018-2020. The working group that will draft the Law for ending gender-based violence has already been established. We are joining forces with the Ministry of Justice to work on the amendments in the Penal Code. In addition, the standard procedures for addressing family violence are being prepared and adopted in collaboration with the civil society,” said Mila Carovska, Minister of Labour and Social Policy of the former Yugoslav Republic of Macedonia.

The three-year programme, ‘Implementing Norms, Changing Minds’, aims at ending gender-based discrimination and violence against women in the Western Balkans (Albania, Bosnia and Herzegovina, Kosovo[1], the former Yugoslav Republic of Macedonia, Montenegro, Serbia) and Turkey, with a particular focus on the most disadvantaged groups of women.

The adoption and full implementation of frameworks aligned with international normative standards – including those standards outlined in CEDAW, the Istanbul Convention and the European Union acquis communautaire – are essential for addressing gender-based discrimination and violence against women. The programme is working to strengthen women’s organizations capacity to hold governments to account, advocate for effective implementation, and monitor prevention of and response to violence against women.

Beyond the full implementation of legislative frameworks, the programme also addresses structural causes of gender inequality – and one of its most pervasive expressions, violence against women – through a transformation of gender discriminatory stereotypes, perceptions and beliefs. Lastly, protection, prevention and response to violence against women is closely interlinked with the availability of and access to comprehensive, multi-sectoral services for survivors of violence.

More information and regular updates on the programme can be found on the website: http://eca.unwomen.org/en/what-we-do/ending-violence-against-women/regional-programme-in-the-western-balkans-and-turkey.

Follow the hashtags #IstanbulConventionForum and #changingmindstoEVAW for social media updates.

[1] All references to Kosovo on this document shall be understood to be in full compliance with UN Security Council Resolution 1244 (1999).