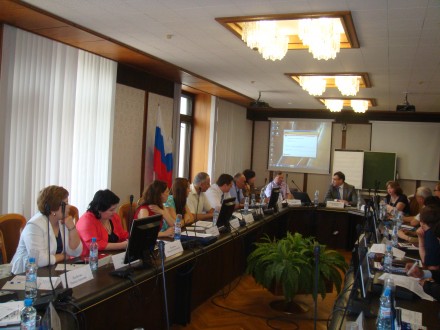 A one-week workshop on gender responsive budgeting with the focus on gender budgeting in employment has been launched in the premises of the Russian Presidential Academy of National Economy and Public Administration (RPANEPA) for civil servants from 7 countries covered by the joint UN Women/RPANEPA project. The workshop brings together representatives from Armenia, 3 persons; Kazakhstan, 3; Kyrgyzstan, 3; Moldova, 2; Russian Federation, 2; Tajikistan, 2; Ukraine, 1 person and representatives of UN Women Subregional Office for Eastern Europe and Central Asia.

It is expected, that the participants who have a critical role in the design of their countries’ national, regional and local budgets will get knowledge on gender-responsive budgeting methodology and apply it in their practical work.RPANEPA executives, representatives of UN Women Subregional Office for Eastern Europe and Central Asia as well as UN Women Project Manager for the Russian Federation presented welcome remarks at the workshop inception. They briefed the participants on the GRB Center of Excellence’s goals and focus areas, as well the workshop’s agenda.Professor Mr. Bartsits, Dean of the International Institute of Public Administration and Management at RPANEPA, emphasized once again a particular relevance of gender issues and especially gender-responsive budgeting for Russia and CIS as well as the issues of employment for women and gender budgeting in general. He proposed to increase capacities of the project and to make further development of this theme in the scientific field of the institute.During the first day of the workshop• Ms. Kalabikhina (Doctor of Economics, the Economic Faculty at Lomonosov Moscow State University, Docent (Ass. of Prof.), responsible person on Master Program in Public, Labor and Population Economics at MSU; expert of UN Women) presented two lectures: "Demography for gender budgeting" and "Advanced tools for gender budgeting. Various gender budgeting approaches: the advantages and disadvantages ".• Ms. Aivazova (Ph.D., member of the Presidential Council of the Russian Federation for development of Civil Society Institutions and Human Rights, Senior Research representative of the Institute of Sociology of the Russian Academy of Sciences) presented a lecture and held discussions on "Gender: basic definitions. International approaches and documents, including gender budgeting issues”.• Ms. Rzhanitsina (Doctor of Economics, Professor of RPANEPA, chief researcher at the Institute of Economics of the Russian Academy of Sciences) presented a lecture on “Gender budgeting: methodology and its role in the state budget format”.The Workshop Diary alongside with the Workshop Agenda and training methodological materials are available in Russian language at the Internet Help Desk on GRB at http://genderbudgets.ru/,created by the project (see Training page).About the ProjectIn early 2012 the UN Women Sub-Regional Office in Eastern Europe and Central Asia, in partnership with RPANEPA and other stakeholders, launched a project on developing regional capacity on gender responsive budgeting for the CIS countries through establishing a Regional center of excellence for gender responsive budgeting at the Russian Presidential Academy of National Economy and Public Administration. The Project has set up an International Center for Gender Budgeting and Management that operates using the RPANEPA premises and expertise as a CIS sub-regional unit which aim is to generate, collect and disseminate comprehensive knowledge needed for training of both trainers and civil servants in matters of gender budgeting methodology and techniques, encouraging thus their practical application for the processes of budget policy design and implementation at all levels.