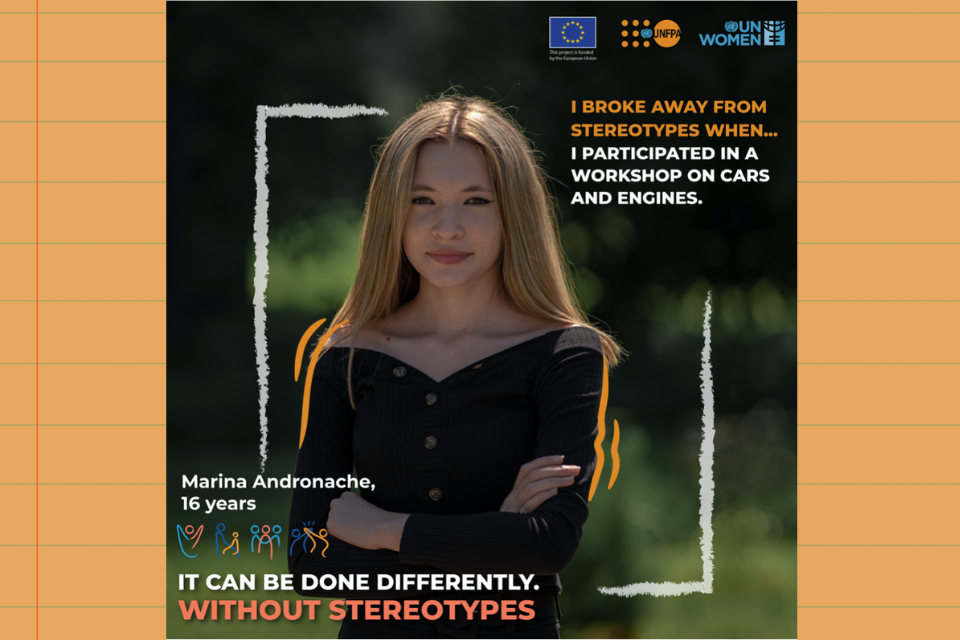 In Moldova, young people like Marina Andronache, 16, met to discuss the gender stereotypes they have faced. Photo: UNFPA Moldova.

“When I was little, a Georgian language teacher told me math was not for girls,” said Sesili, a 16-year-old girl in western Georgia. “I wanted to do math and play sports, and my mother supported that, but the headteacher did not.”

Temo, age 17, is from the same region and has his own childhood memories of adults’ expectations. “We’d hear ‘Art is not for boys, and tech is not for girls,’” he said. He also remembers how expressing feelings was discouraged. “When teachers would shout at me, I’d go home. I was an emotional child,” he said. “They’d say boys shouldn’t be that way.”

Strengthening young people’s ability to challenge stereotypes like these is a key goal of “EU 4 Gender Equality: Together Against Gender Stereotypes and Gender-Based Violence,” a three-year project in six countries funded by the European Union (EU) and implemented jointly by UN Women and UNFPA. The EU4GE programme reaches out to children, teens, and their parents to reshape ideas about young people’s potential — whatever their gender.

Sesili and Temo joined other teenagers in Georgia for a four-day Youth for Social Change initiative that involved role-playing, simulations, and discussions. “In one exercise, we looked at newspaper articles. There was one about the increase in the number of overweight women. Our question was: Why was it only about women?” said Temo.

Sesili’s group eventually created a mini-play about a girl who received an offer to study at the University of Cambridge but was pressured to get married instead. “We weren’t sure we’d have an audience – or we thought they’d be hostile,” she said. “But the response was good,” she remembered, excited that almost the entire audience supported the girl’s decision to study at university first.

The EU4GE project for young adults often asks them to reflect on how their upbringing shaped their views of what men and women can do. In Armenia, toys were the focus of one Caring for Equality parenting session at EU4GE-supported Family Corners. Couples picked a toy they thought their child might like, and then discussed what gender roles it might encourage. Parents also share their experiences of growing up and talk about what worked well—and what they’d like to change in their own families.

Also in Armenia, an interactive puppet show starred a father rabbit who voiced common stereotypes: “Parent meetings are for mothers,” said the rabbit, who emphasized that his role was to hunt for carrots. “You mean I should go to the parent meeting where women are all around and I am the only man? What will folks think of me?”

The show asked audiences to vote, by ballot, on what the play’s mother rabbit and father rabbit could do. “My suggestion is: ‘I take care of the child for several days and then you take care – let’s do that interchangeably so that we both manage to work,’” said one boy in the audience.

Breaking down stereotypes about girls in sports is the focus of an EU4GE video from Azerbaijan. “Most people in our society relate sports to men,” said Farid Taghizade, a taekwondo trainer. “But that is not the case at all.” As his girl students practice their roundhouse kicks, the coach calls on fathers to prevent discrimination against their daughters.

‘I broke away from stereotypes when I…’

Reaching teenagers before stereotypes become embedded is one goal of EU4GE. In-person and through social media, programmes ask teens to think critically about what they’ve been told they can do as a girl or a boy – and what they truly can do in life.

In Moldova, a group of teenagers and adults met to talk about their experiences. “My father said he would not wash dishes when there were two women in the house,” said one woman. “I’ve never seen a woman repair a car,” said a young man. EU4GE sessions in Moldova also ask groups to discuss old sayings that are still repeated today, like ‘Femeia bună nu are nici ochi, nici urechi, nici gură.’ – “A good woman has no eyes, no ears, no mouth.”

The Moldovan youth were asked about a moment when they expanded their ideas about their capabilities. “I broke away from stereotypes when I knitted a scarf,” said a young man. “I broke away from stereotypes when I chose to play on the school football team,” said a young woman. Those words and the faces of the young people who said them are featured on social media, encouraging peers to broaden their thinking.

In Ukraine, a series of videos about stereotypes went viral on TikTok, reaching 6 million people. Coining the word “gringe”—a combination of “cringe” and the G from “gender”—the campaign asked young social media influencers to talk about the embarrassing ways that gender ideas have been imposed on them. They also role-played their reactions to tired sayings like “guys don’t cry” and “women don’t belong in politics”.

Getting the word out

These and other EU4GE campaigns appear online or in outdoor spaces. “It Can Be Done Differently – Without Stereotypes” is the theme in Moldova, where crosswalks, billboards, and even an outdoor concert by young people share messages of equality.

When the Moldova campaign launched a series of cartoons that used caveman and woolly mammoth imagery to overturn gender stereotypes, the cartoons reached tens of thousands of people in their first two weeks online. The cartoon shows a caveman doing housework while the woman hunts. A male Facebook user commented: “If the woman goes hunting mammoths, sweeping is not a problem.” Some commenters emphasized that cultural pressures are applied unfairly: “A woman without a good financial situation, it's nothing weird,” wrote one man. “A man without a good financial situation = lazy, afraid, cowardly, insecure, immature.”

In Georgia, a series of posters and videos play on the Georgian word for “cut through,” which can also mean “solve.” The images show a woman or man literally wrapped in stereotypes – strips of cloth that bind them – while murmurs in the background become more frantic and urgent:

“What are you doing in the kitchen, are you a woman?”

“Why does she need to study, she can just get married.”

“That’s not a woman’s profession, you won’t get in.”

In the finale of the one-minute videos—some of which star well-known Georgian actors—the people bound in strips of cloth torn off what keeps them trapped. The videos were viewed more than 50,000 times in the month after they launched online. They also sparked dramatic conversations: “For 20 years I lived my life based on what people would think of me. That's why I could not develop myself professionally and lagged behind in life. I was not allowed to work because I was a woman and had to stay at home,” commented one Facebook user. “I solved [cut through] this problem and discovered myself and my abilities again. Don’t enslave yourself.” 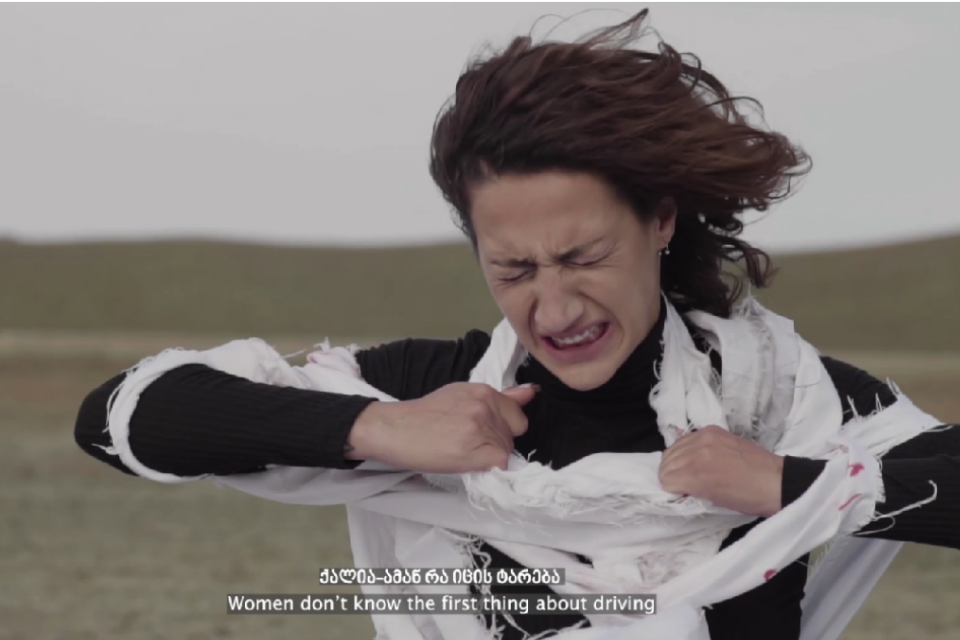 EU4GE is reaching audiences and families with powerful messages of change and possibility. By addressing and overcoming gender stereotypes, the project is making a real impact in the six countries it operates in. In Moldova, a session for tween boys took place outside, with football breaks. Asked why it’s important for mothers not to shoulder the entire burden of household chores, one boy simply said: “Because there must be equality.”

Related News
27/09/2022
Documentary and Short Film Festival Celebrates the Power of Women in Kosovo
28/12/2021
Non-Violence Summit and Creating a Violence-free World exhibition held give visibility to gender-based violence in Gaziantep, Turkey
20/09/2021
First HeForShe University Tour kicks-off in Ukraine
25/08/2021
In the words of Jelena Mladenović: “The hardest part is to realize what could, in my article, benefit the victim and what could possibly harm her”
18/06/2021
Take Five: “Social norms and ethical systems need to change to improve gender equality”
END_OF_DOCUMENT_TOKEN_TO_BE_REPLACED