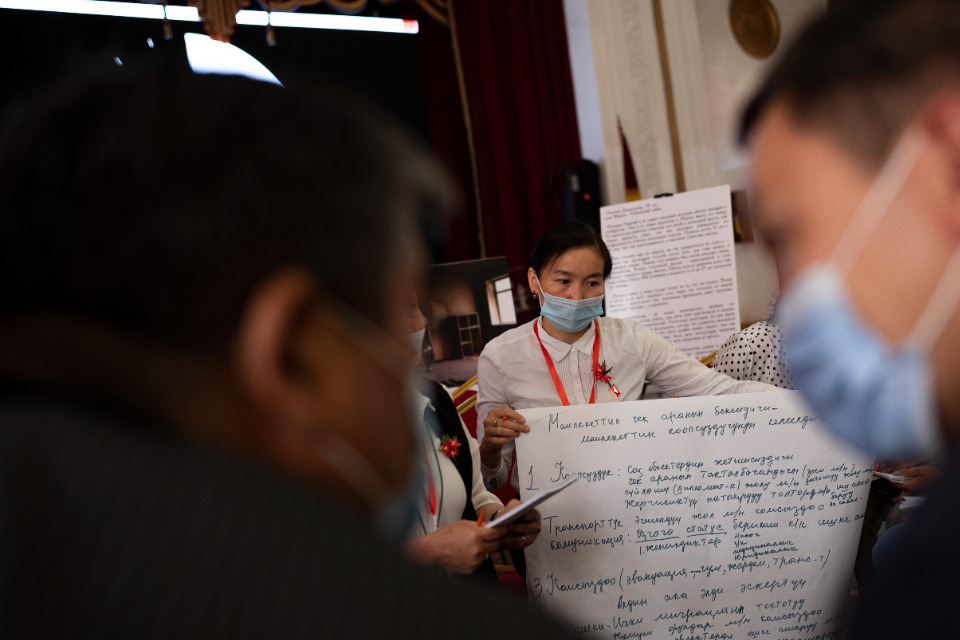 Purpose of the event was to conduct a dialogue with women leaders from the conflict-affected territories so that they can express their visions and opinions. Photo: UN Women/Maxime Fossat

On 3 June, in Osh, southern Kyrgyzstan, UN Women held a dialogue called, “Consolidation of society for the sake of peace, unity and development of the country: A breakthrough into a new era through women's leadership.”

The event brought together women leaders from territories affected during the Kyrgyz–Tajik conflict, which took place at the end of April. The platform gave the women an opportunity to express their vision and opinions on ways to resolve the conflict, finding effective approaches that contribute to a long-term and sustainable peace.

The event used a unique format. Participants were divided into groups, which consisted of women activists and women deputies of local councils from the affected areas of the Batken region, in the southern part of country, where the Kyrgyz-Tajik border conflicts erupt, and representatives of state structures and members of parliament.

“The purpose of our event was to create a unique platform where representatives of the authorities, deputies of parliament, the cabinet of ministers and local self-governments listened to and discussed with women activists from the affected border areas of Batken region. They are activists or newly elected members of councils who indicated that their voices and experience are not taken into account in the decision-making process at different levels. They already have concrete proposals and solutions to problems for their communities,” said UN Women representative, Ulziisuren Jamsran.

“Thanks to a 30 per cent gender quota reservation for local councils, today the representation of women in local councils has grown from 10 per cent to 38 per cent. This is indeed a huge political success for all of us, and for our country. Dear women, dear sisters, now you have are not only members of local councils, but you have instruments of power that you can use for the benefit your village, your community, your country. I urge you to work hard, because Kyrgyzstan needs your talents, strength, wisdom, experience more than ever,” said the Deputy Chairperson of the Cabinet of Ministers, Jyldyz Bakashova. 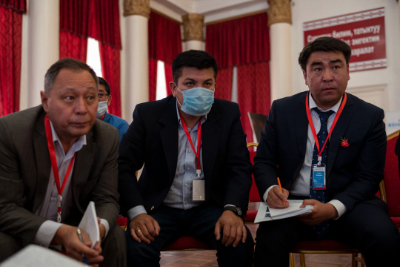 “Our letters, our requests most often do not reach high-level people. Today's dialogue helped to convey our problems and solutions to the relevant people who make decisions on these issues. This was the first time when everyone spoke on equal terms, the dialogue was very open,” said Daryika Kalykova, member of local council of Kara-Bulak disctics of Batken region.

“Today's dialogue was unique. We, as members of the parliament, often travel to the regions, but we quickly meet with the residents who are gathered by the local authorities and leave. Today, more than ever before, we have had the opportunity to listen to the concerns of the people, especially the women who live in the area. My fellow parliament members and I wrote down all the proposals, exchanged numbers, and we will promote the bill giving a special status to the residents of the Batken region together with representatives of the Batken region,” said parliament member Janar Akayev.

As a result of the event, the participants recognized the importance of women's inclusion and their contribution to solving problems, including during the initial response to a conflict, as well as in resolving disputes, post-conflict reconstruction and preventing the further escalation of conflict in the border areas.

The event was held in the framework of UN Women project supported by UN Peacebuilding Fund.

Related News
08/06/2021
In the words of Sofia Maksymenko: “Women in decision-making positions bring their unique knowledge and experiences to the local development processes”
30/03/2021
This is what leadership looks like: Alina Mykhailova breaks stereotypes about women in the military and in politics in Ukraine
24/03/2021
Forum in Kyrgyzstan showcases women’s leadership and contribution
15/03/2021
Local women leaders boost the economic wellbeing of their communities in rural Kyrgyzstan
18/02/2021
In the words of Olga Tsyba: “Women have more power than ever before”
END_OF_DOCUMENT_TOKEN_TO_BE_REPLACED