This is what leadership looks like: Alina Mykhailova breaks stereotypes about women in the military and in politics in Ukraine

After spending four years in the Ukrainian military, 26-year-old Alina Mykhailova joined the Women Veterans’ Movement. As a youth leader, she mentors youth activists and last year, she was elected to the Kyiv City Council. Now, she is taking the lead on youth engagement and veterans’ affairs policies. 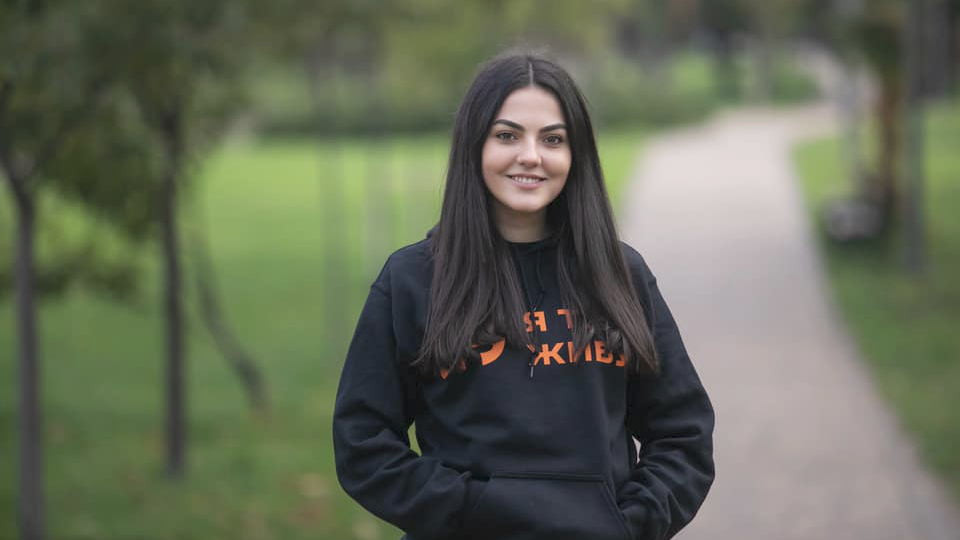 “I spent four years in the male-dominated military environment and rarely faced sexism until I ran for elected office. Once, at the district electorate meeting, people started degrading my military experience, age and gender, although they knew nothing about me. They were so concerned that I was young and a woman, although my male predecessor on the city council was five years younger than me when he was elected, and I had a more distinctive life experience.”

A fighter and a healer

As a student of public policy at Kyiv State University, Mykhailova’s leadership journey began when she volunteered for the army, after the conflict in the East broke out in 2014. A few months later, at the age of 20, she launched a branch of the volunteer fundraising non-profit Armia SOS in the city of Dnipro, central Ukraine, to support the Army with equipment, food and clothing, focusing on women in the military. After graduating from university in 2015, she joined the medical battalion and made regular humanitarian trips to the conflict zone, bonding with like-minded people, many of whom she lost.

In 2016, Mykhailova joined the Ukrainian Armed Forces’ volunteer medical battalion Hospitaliers, where she took training to become a paramedic. She advanced to head the medical unit, ensuring that the most cutting-edge emergency medical care was provided for the injured soldiers. Later, she led aerial reconnaissance, then supported the medical unit’s external relations, reaching more than 40,000 followers on the Hospitaliers’ Facebook page.

“I learned what it takes to be responsible for someone’s life. So, when I started thinking of a career in politics and doubted if I was ready, I realized that if I took responsibility for people’s lives on the frontlines, I could do this as a politician.”

Upon returning to civilian life, Mykhailova was awarded a Bohdan Radchenko Stipend for Veterans at the Kyiv School of Economics, where she earned a Masters’ degree in Public Administration. She also joined the Ukrainian Leadership Academy, a non-profit that provides mentoring and career orientation for students. Her military experience, commitment to social change, and integrity won the hearts of many aspiring youth leaders. For many male students, it was an eye-opener about women in the military, shattering gender stereotypes around women and girls in leadership.

“Don’t be afraid to leave your comfort zone,” says Mykhailova, adding that her advice to aspiring young women and girl leaders is simple: “You cannot learn how to be an honest person with moral principles and integrity. Everything else you can learn. If you have this virtue, believe in yourself and lead your way.”

Mykhailova was identified as one of the top 20 social media influencers in Ukraine in 2020. That same year, she was invited to run for the Kyiv City Council, and she won. Now, as a City Council member, she works on veterans’ affairs, medical care in the defense sector and youth engagement policies. She is also an active contributor to the newly established Equal Opportunities Caucus on the Kyiv City Council, where many male members joined forces together with their female colleagues to advance gender equality and women’s empowerment in policymaking and governance.

Mykhailova is a member of the Women’s Veteran’s Movement, which is a grass-roots women’s organization established in 2019 following a nation-wide advocacy campaign “Invisible Battalion”, supported by UN Women Ukraine.

In addition to engaging in UN Women advocacy, the Movement supports women veterans with knowledge and practical skills to improve their long-term financial and economic security. Mykhailova was among the many women veterans who have enhanced their knowledge of human rights, Women, Peace and Security (WPS), advocacy and leadership, and non-violent communication through several UN-Women-supported trainings. They applied this knowledge during the process of developing a Second National Action Plan on UN Security Council resolution 1325, which was adopted in Ukraine in 2020. Mykhailova will now lead the process to localize the NAP, through the Kyiv City Council.

Related News
04/05/2022
Ukraine: New UN Women and CARE report highlights disproportionate impact of the war on women and minorities
08/06/2021
In the words of Sofia Maksymenko: “Women in decision-making positions bring their unique knowledge and experiences to the local development processes”
18/02/2021
In the words of Olga Tsyba: “Women have more power than ever before”
20/05/2022
Meet Yaroslav, a young Ukrainian refugee with disabilities who dreams of becoming a DJ
19/05/2022
Interview: “The war in Ukraine may be changing the women’s movement, but it’s not stopping it”
END_OF_DOCUMENT_TOKEN_TO_BE_REPLACED