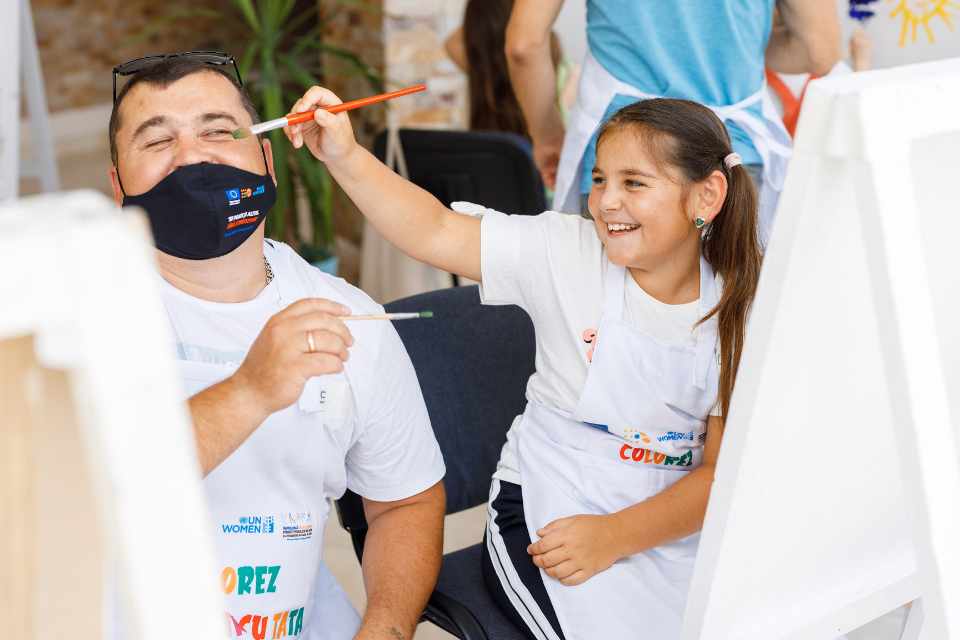 “When I was growing up, my father would say, ‘I am the man in the house and as I say, so be it.’” Dumitru Dunas, a young father from Moldova, speaks gravely about his traditional upbringing. “He never allowed my mother to go out to do anything. He said the woman should be dirty with flour, and the man should be dirty with dust from the outside.”

When he married, Dunas wanted to do things differently. "Because I saw the absence of the father in my family as I grew up, I understood how important it is for a father to be close to his children.” Every day, he shares in household chores like cooking meals, playing a hands-on role in taking care of his five children.

Supporting fathers like Dunas—and encouraging other men to become more involved in daily childcare—is one of the goals of the EU 4 Gender Equality: Together Against Gender Stereotypes and Gender-Based Violence, an EU-funded project jointly implemented by UN Women and UNFPA in Armenia, Azerbaijan, Belarus, Georgia, Moldova and Ukraine. Launched in spring 2020, EU 4 Gender Equality has already reached millions of people with messages about equally sharing family responsibilities. The project has also launched father’s clubs, training sessions, and father-child activities throughout the region.

In areas where authoritarian fatherhood norms may dampen family relationships, the first step is often just creating space for dads to enjoy time with their kids. In Ukraine, Georgia and Moldova, fathers’ clubs have held father-child cookie baking sessions, storytelling hours, painting workshops, and more. Photo competitions by EU 4 Gender Equality partners showcase images of dads having fun with their children, like this Facebook gallery of dads and daughters.

In Azerbaijan, where some norms reinforce rigidly gender-defined parenting roles and where some couples may prefer to have sons, the awareness-raising campaign “My Father Loves Me” celebrated bonds between fathers and children. In one video, a dad explains how he championed his daughter’s athletic goals despite scepticism from others. She became a prizewinning young wrestler. When dads play a part in their children’s lives, they can take pride in their children’s accomplishments.

In Ukraine, families in 10 cities united in a music flashmob, playing instruments and singing. In Armenia, an interactive puppet show about a family of rabbits encouraged young audience members to re-think dad's role—and “women’s work”—in a family. 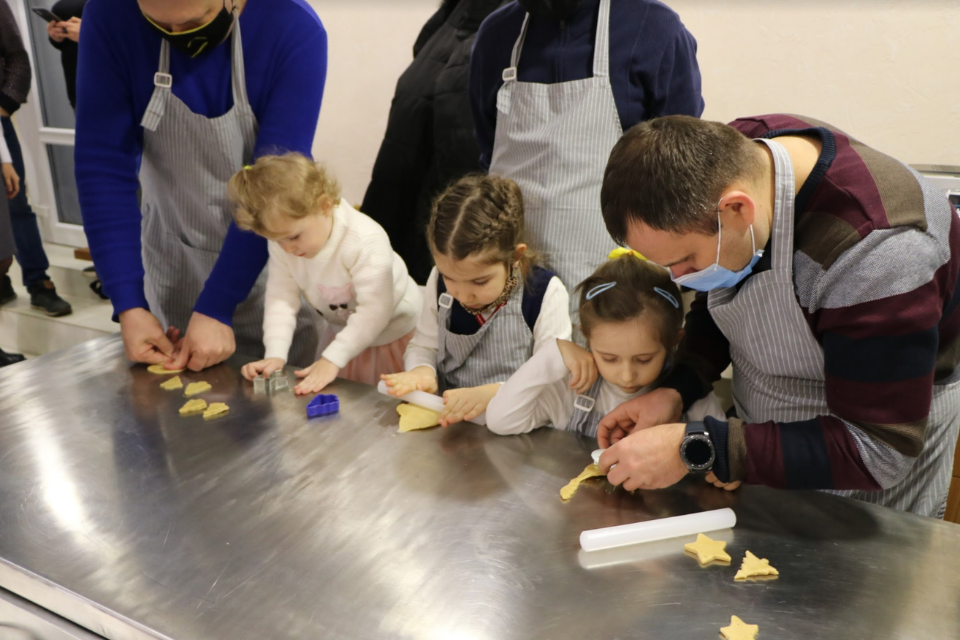 To overturn gender stereotypes in Ukraine, EU 4 Gender Equality supports father’s club activities that men can do with their kids, like cookie-baking. Photo: UNFPA Ukraine

Beyond playing and celebrations, kids need fathers who share the load at home. A 2020 survey on gender stereotypes, surveying thousands of men and women in the region in 2020, showed that significant percentages of men and women think men’s careers come first and women’s careers are secondary. In societies where women are expected to shoulder most unpaid care work, mothers disproportionately spend hours on domestic chores and childcare. Trying to meet society’s expectations results in women having less time to invest in their professional development. EU 4 Gender Equality: Together Against Gender Stereotypes and Gender-Based Violence project combats these limiting stereotypes by promoting the equal sharing of responsibilities between women and men.

Through clubs, on TV, through social media, and through other activities, the project encourages fathers to take on daily household chores like cooking, washing, and cleaning up after their kids. In Armenia, the programme launched “Family Corners” where parents learn better skills, commit to equitably sharing childcare and household work, and talk about gender stereotypes that might be harmful to kids. They also address topics like anger management, as well as preventing domestic violence and gender-biased sex selection.

In Azerbaijan, public service messages show that men can do chores. And in the days leading up to Father’s Day in June 2021, a popular TV channel in Ukraine urged dads to send in photos and videos of them doing specific childcare tasks, like brushing their child’s hair. Participants of the #21daysofrealfather challenge in Ukraine are featured on the channel’s morning show.

Fatherhood, right from the start 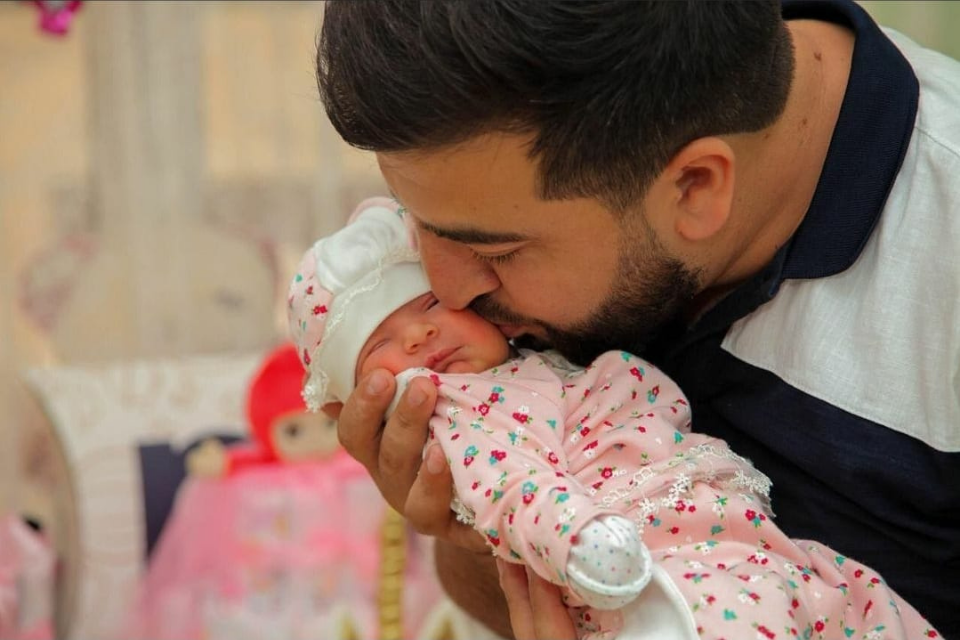 114 baby boys are born for every 100 girls in Azerbaijan, and couples may feel pressure to have a son. Photo: Clean World Azerbaijan

The programme envisions a world where fathers engage with their children from day one. EU4GE-funded “Papa Schools” teach men what to expect when they accompany their pregnant partners to prenatal visits, as well as infant care basics like how to support a baby’s head correctly. An accompanying manual, translated into regional languages, is a reference guide for the classes. So that health-care workers can encourage men to be a part of prenatal care, the project developed training materials specifically for clinic staff who talk to expectant couples.

Mirian Jugheli was one of the first dads in Georgia to take paternity leave. He is a co-founder of MenCare Georgia, which launched EU4GE-funded father’s schools in the country [watch Facebook cartoon video]. "A lot of men think there are male and female roles in the household, and a child is a woman’s job,” says Jugheli. “I hate it when people ask, ‘Are you helping your wife?’ Parenting is not about ‘helping’ a partner, but rather about equal obligations and opportunities to raise a child.” Instead of seeing fathers as add-ons whose involvement is optional, father’s schools bring men into their parenting role as full participants.

During the sessions in Georgia, dads ask practical questions about childcare. “We get questions like, ‘What if food gets stuck in the baby’s throat?’” says Jugheli. Dads also learned useful tips like how to pack a "father’s bag" with things like diapers, cream, and first aid supplies.

In Moldova, father’s club participants start off by thinking about their own father’s legacy, both the good and the bad. They reflect on the question "One thing about my father that I don't want to repeat with my child is..." The clubs also reach out to young men well before they become parents. 17-year-old Ionuț Chintea says he’s learned to distinguish healthy habits from stereotypes and learned more about gentle parenting. "When I become a father, I will be as good as possible with my children,” he says. “I will spend time with them, I will tell them "I love you", I will be part of their lives.” 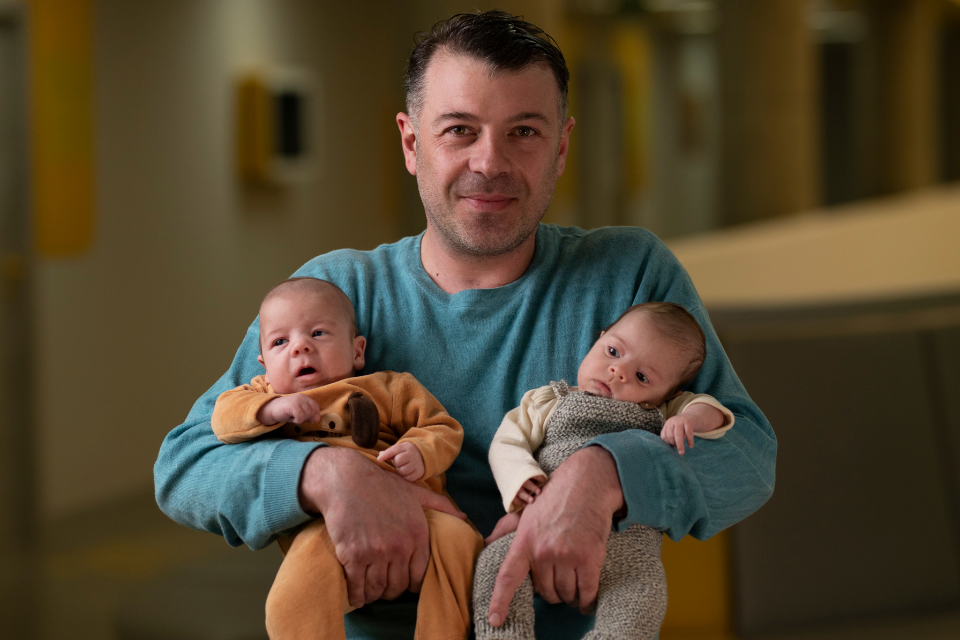 Sometimes men want to be more involved in their children’s lives, but face pressures at work to put their career first. Together with project partners, UN Women and UNFPA advocate for paternity leave, family-friendly company policies, and legal changes that make it easier for fathers to spend more time with their kids. In an online session in May 2021 in Belarus, companies learned ways to make their human resources (HR) policies more workable for families.

“The challenge is that societal and mental change take time, sometimes decades. Rome wasn’t built in a day,” says MenCare’s Jugheli. “But we have already seen results from our work. We are determined to get closer to a society where men take full responsibility for their children – and get involved in the daily routines of their families' lives.”

Related News
18/05/2022
Families start businesses, redistribute chores, and transform gender norms in Kyrgyzstan
10/02/2022
Interview: “As a scientist, my mission is to raise public awareness and contribute to informed decision-making”
08/02/2022
In the words of Marharyta Meleshkova: “We can reach any height. The main thing is to overcome the stereotypical barriers that exist only in our heads”
08/02/2022
From Where I Stand: "Think about the problems you face daily and dare to create new solutions."
01/12/2021
In the words of Natalia Tiuniahina: “My biggest inner need is to help women accept their status, to teach them to live a full life with HIV”
END_OF_DOCUMENT_TOKEN_TO_BE_REPLACED