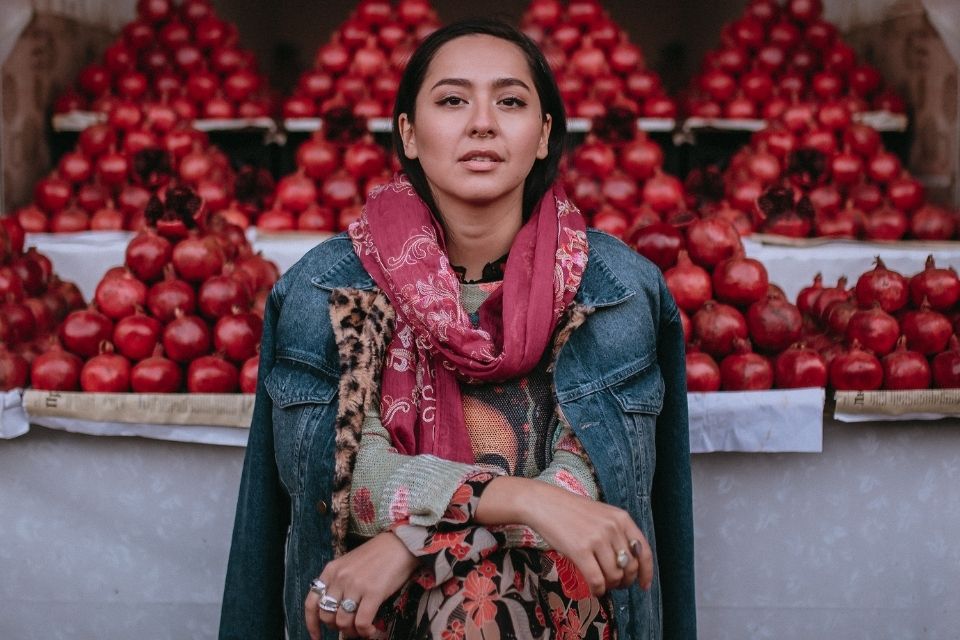 As a child I witnessed domestic violence and I thought it was normal. At the age of 15, I remember wondering why I never hear about this issue in the media, on TV, in the music industry, in school or other places. It took me years to process the fear and pain inside myself and I am not the only one feeling this way. I’ve seen and still witness how women in Tajikistan and across the region keep silent about violence because of the fear of shame.

Music has always been a safe space, a cosy corner where I can let go of some the pain and weave it into my songs. When I see people listening to my work and writing to me saying that it touches them and that it helped them find relief, I realize that my mission is to create music that supports people and changes the world.

"We need to recognize violence around us and help women and girls find strength to get out of abusive relationships."

I was inspired by my mum, who has been a psychologist for 10 years. I have always watched how she helped women get out of crisis situations, seek refuge and legal assistance; and how she defended them. Last year, my mother and I launched a mobile application to help victims of domestic violence. The application has an emergency call button for help and a map that shows the nearest crisis centres. It also allows for feedback – where its users can share how they felt when they faced or witnessed domestic violence. A year after we released the application, my mother and I travelled to Russian provinces to raise awareness about domestic violence and to talk with women about the challenges they face.

Men play a vital role in ending violence against women

Very few people speak about working with the perpetrators of violence. They say: “Why do they need help, they are monsters?”. This is why men [perpetrators] remain silent about their inner problems, because they understand that society will still call them monsters. I observed in my own life how many perpetrators of violence are changing, even though this is a very difficult path. Abusers are not born that way. The first entry point for violence is the family. The second entry point is society, and hence the media space and everything that broadcasts a distorted idea of love.

Media personalities need to unite with development organizations and collaborate in spreading the word about the issue more widely. We need comprehensive projects that will help women and men seek help. We must educate each other. Perhaps, with this knowledge, we can save others and ourselves.

Manizha Sangin, a 29-year-old popular feminist singer, was born in Tajikistan and is now based in Russia. She is also a social activist fighting against gender-based violence and advancing the rights of refugees and migrants. In 2020, she became the UN Goodwill Ambassador for the United Nations High Commission for Refugees. Manizha and her mother also created their own non-governmental organization, SilSila, in Moscow, to help women migrants and refugees from communities in Central Asia and rural Russia that often still hold traditional views about the role of women. You can also watch her live talk with Zere, a feminist singer from Kyrgyzstan, about the role of women in patriarchal societies held during the 16 Days of Activism against Gender-based Violence campaign.