In the words of Dinara Ruslan: “Confidence should be built in the family from childhood”

Dinara Ruslan, 30, founder and head of the IT company Codify Lab, discusses her chosen career path in IT and gender obstacles. She was one of the only girls enrolled in the faculty of engineering at the polytechnic college of the International University of Kyrgyzstan. After graduating, she worked both abroad and in Kyrgyzstan, before opening her own IT company in her living room in 2019. Today, Dinara Ruslan is not only a successful businesswoman, but a motivational speaker and mentor coach who espouses a “women-support-women” approach. 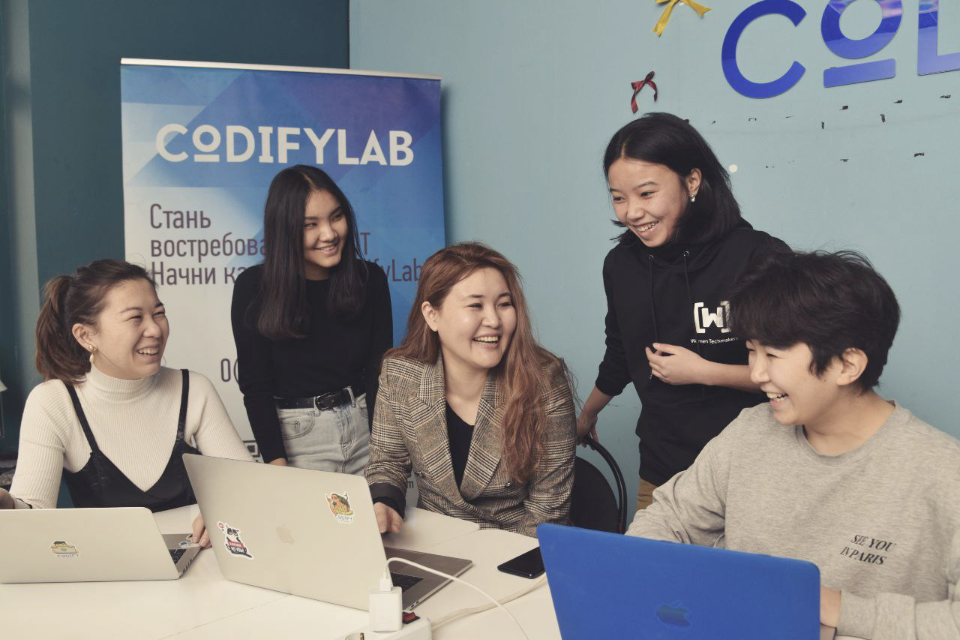 In 2006–2007, nobody really knew about programming and coding. It is great and trendy to be in IT right now, but when I graduated from college in 2011, it was not a cool profession or a popular pursuit. Now more people consciously choose the IT sphere, especially girls, and this is very pleasing.

[When I started my business], we sat in the living room of my apartment for two months and then moved to a coworking centre. For the first six months, two other people [and I] worked on the project, and then we began expanding. Now we have 20 full-time employees and 40 part-timers who teach at the academy.

Was I scared to start my own business? Yes, definitely. But no one knows how to do it right. You just have to go and do it. Then you will figure out the next steps according to the situation and context.

I’ve been working in this field for eight years and there has never been a problem with getting a job or a project because I am a girl. Companies are interested in making a profit, so they don’t care who does the job. The most important factor is the quality of the work you do. Therefore, whoever does it the fastest, or the best, brings in the most money. The IT field is quite specific about quality because either your product works, or it doesn’t.

To me, stereotypes are in people’s heads. Sometimes girls have built barriers themselves and follow stereotypes. I think the problem lies with the way we [girls] were raised to be girly and nice. And when the time comes to take a step, we become afraid of failure – thinking we’d rather be nice than failures.

I am lucky to have my parents. My parents always told me: do what you want. It seems to me that confidence should be built in the family from childhood. The idea should be that you yourself are building your own future. If it was not built in childhood, everyone still has the choice to do it themselves. You can find many examples of people who found opportunities on their own and achieved success.

Do I fight stereotypes? I am doing my best – where I can, where I have the opportunity. Sometimes I am invited to the regions to do motivational speeches. First, I try to convey the idea that stereotypes are in our heads. Second, I try to support and help girls at work. Perhaps this is a little unfair to boys and men, but with the girls who work in our company, I try to motivate them and spend some extra time with them, if needed.

What advice would I give to women and girls? Stop thinking so much. Just go ahead and do it. … If something doesn’t work out, it’s not the end of the world.”

Related News
12/11/2021
Call for Proposals to support the establishment of a regional funding mechanism for the Central Asia women’s movement.
24/09/2016
From where I stand: Ileana Crudu
07/01/2016
Moldova ramps up IT training for girls
27/06/2022
Small grant support gives courage and motivation to women’s organizations, enabling them to thrive
18/05/2022
Families start businesses, redistribute chores, and transform gender norms in Kyrgyzstan
END_OF_DOCUMENT_TOKEN_TO_BE_REPLACED