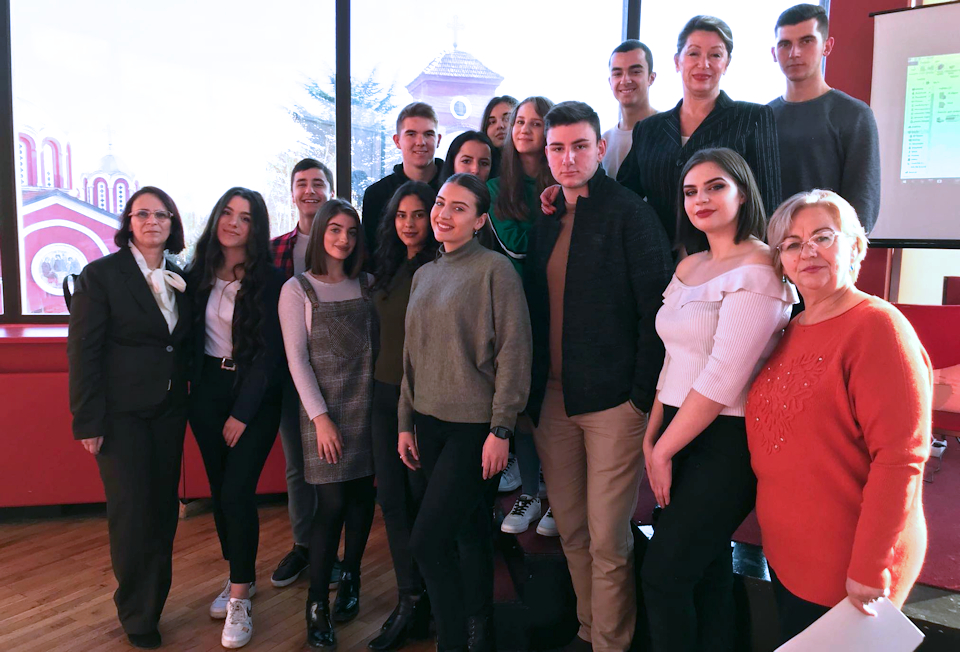 High school teachers and students across North Macedonia are empowered to reject harmful gender stereotypes and support women and girls who experience violence, thanks to the project “Creating a culture towards gender equality,” implemented by the Macedonian Young Lawyers Association (MYLA) and the Association for psychology and psychotherapy Psihoterapika, within the UN Women regional programme on ending violence against women “Implementing Norms, Changing Minds,” funded by the European Union.

Aiming to encourage a new generation of youth that is not afraid to challenge harmful practices such as violence against women, around 140 students and teachers from six different high schools from the municipalities Shuto Orizari, Karposh, Kumanovo, Shtip, Tetovo and Kichevo in North Macedonia are learning about gender stereotypes and patriarchal customs as root causes of gender-based and domestic violence. They are also exploring new ways to raise their voices against violence and abuse.

The project, which kicked off in 2019, involves 120 students and 18 high school teachers and takes place in two phases. During the first phase, the students attended ten workshops around gender equality, harmful gender stereotypes and violence against women, and organized a local community event during which the students used their newly acquired skills and knowledge to show what harmful gender stereotypes can do to young people. They also asked questions to the local service providers – centers for social work, police, civil society organizations (CSOs) – on what needs to be done to end violence against women. During the second phase, which began in October 2020, the students have channeled their inspiration and deepened their understanding through performance, research or debate activities around issues such as violence against women and gender equality.

“What we learned from this project is that when you give voice to youth to channel their concerns, they make passionate projects that move mountains. Last year, students developed creative initiatives to raise community awareness on gender equality and violence against women and girls. Although the second phase is conducted under COVID-19 circumstances, we are giving them the opportunity to explore the topics of stereotyping and violence and then showcase their understanding through research, debate or performance,” says Pavlina MIihajlovska, a psychologist at Psihoterapika.

As a result, the high school students created short movies, animated movies and myth-busters; organized debates around the issue of gender equality, harmful gender stereotypes and violence against women; and learned how to speak out and demonstrate zero tolerance towards gender-based violence.

“My friends and I learned that we are equal regardless of gender and other differences between us,” says Alie Bajram, 17, student in Shaip Jusuf, high school in Shuto Orizari

“The project is significant to us because the topic is urgent, especially because many people ignore it, and many women need help. This project showed me that one initiative like this may motivate people to fight against the injustices they suffer,” says Rukmedije Ballazhi, 18, from high school Drita in Kichevo.

This year, a high school psychologist from the school Dimitar Miraschiev in Shtip conducted a 45-minute class session on recognizing gender-based violence. “All students should learn about their rights and obligations, how to recognize and react to violence and where to report it, and, most importantly, how they and their community should support women survivors of violence,” says the psychologist Elena Ivanovska-Kostadinova.

“Before this project, I was not aware that there were other types of violence apart from physical violence. It makes me so happy to have all this information about recognizing violence, and most importantly, how to protect myself and others from violence,” says Suejla Emini, 18, from the high school Nace Bugjoni in Kumanovo.

Two schools have already included activities from the project in their annual high school programme, a set of activities that schools are obliged to conduct and report on before their municipalities at the end of each term.

“This topic is highly sensitive for our society and yet so underrepresented in educational materials. In order to enable students to strengthen their knowledge and gain confidence in battling gender stereotyping, we put the project in our annual high school report and annual programme. We had a great response from the media during the local events, but most importantly, we had great responses from student, parents and high school staff,” mentioned Divna Jankova, a psychologist from the high school Nace Bugjoni in Kumanovo

Having trained a generation of students to spread knowledge and act confidently to discourage harmful gender stereotyping amongst their peers, a new group of 120 students have been encouraged to enroll for a second cycle of the project.

“We are touched by the story of a mother and a daughter who experienced domestic violence and had the courage to speak about their experience. The daughter, a high school student, was determined to work with other students to create a better environment for gender equality and protection of women survivors of violence,” says Jankova.

“I now feel liberated, confident and ready to face the challenges and be a role model who will not be silent, since this is the only way to solve our problems and help ourselves,” says the young student, once a young woman who experienced violence, today a young woman who speaks out against violence towards women and girls.

“We still have months of work ahead of us and hope to encourage the students to speak up even more freely in their fight for gender equality and a society free from violence for all,” concludes Maja Atanasova, Project Coordinatior at MYLA.

Related News
14/04/2022
Interview: “Economic independence is a key factor for a woman survivor of violence to start a new life”
13/04/2021
Take Five: “It’s hard to speak out when you believe no one is there to hear”
23/03/2021
Call for Proposal for civil society organizations in the Republic of North Macedonia to submit project proposals focusing on economic reintegration opportunities for women survivors
08/03/2021
Women leaders in the Western Balkans and Turkey confront violence against women amid the pandemic
08/06/2020
In the words of Stefan Petrovski: “We need to raise awareness and prevent violence against trans men and women”
END_OF_DOCUMENT_TOKEN_TO_BE_REPLACED