Micro-gardening enables Turkish and Syrian women, together with the other household members, to grow quality and healthy vegetables in their living rooms, balconies or on their rooftops. Provided by UN Women to around 100 households, the soilless agriculture kits contribute to their economy and wellbeing in southeast Turkey and increase their access to livelihood and dietary diversity, amid the COVID-19 outbreak. 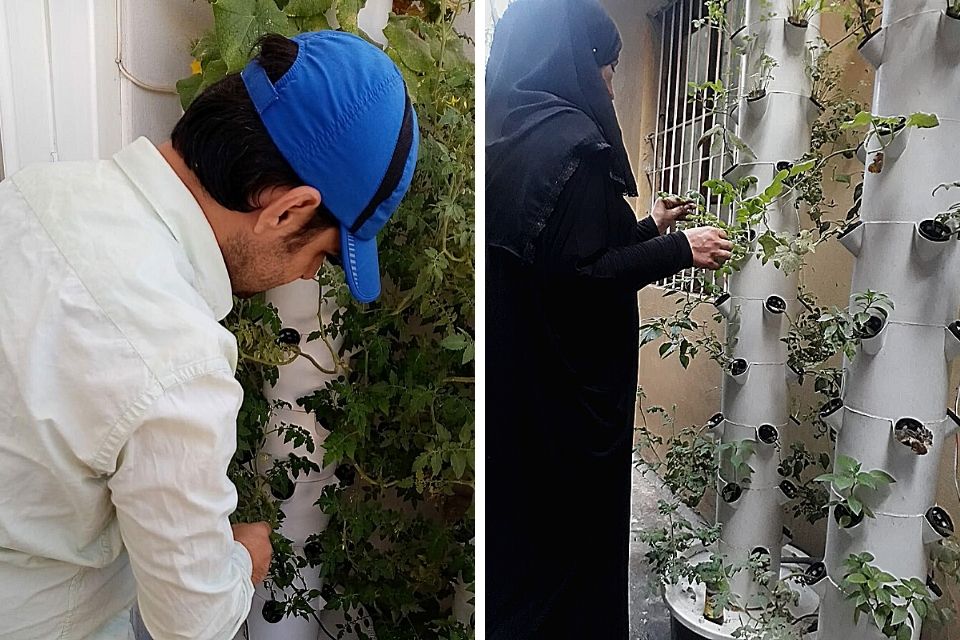 Emre Erhani and Fatena Khalil have been doing micro gardening and growing healthy and quality vegetables at home. Photo: ASAM

“It is a joy for us to make a salad out of the vegetables freshly grown inside our home. I am not buying iceberg or parsley from the market anymore. This allows me to spend on other needs,” says Fatena Khalil*.

Khalil is from Syria and lives in Gaziantep, a province of Turkey near the border with Syria. She and her family are among the beneficiaries of the micro-gardening project. She says: “Whenever I have guests, I proudly say, ‘look, this salad is made from my veggies’. The harvest was around Ramadan and it greatly contributed to our household economy. Moreover, it healed me. Growing something at home, feeding it with water, and observing the seeds turning into huge edible leaves made me happy. When you see the results of your efforts, you are encouraged. Now, I am growing green peas and chili,” she says. 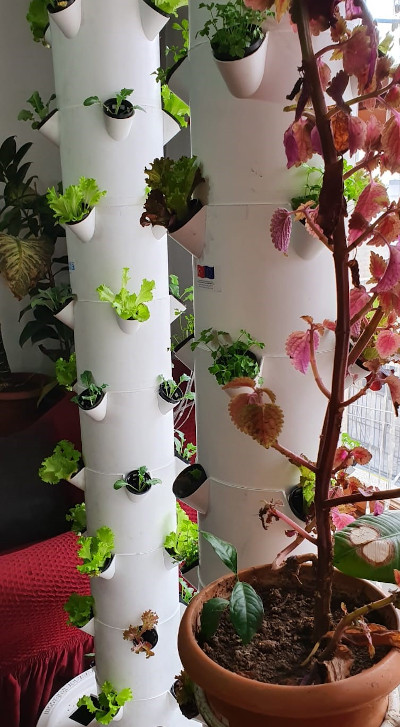 Micro gardening emerges as a sustainable and affordable way of increasing the food security and dietary diversity of Turkish and Syrian households. Photo: UN Women

In December 2019, UN Women joined forces with the Association for Solidarity with Asylum Seekers and Migrants, a partner of the regional programme “Strengthening the Resilience of Syrian Women and Girls and Host Communities in Iraq, Jordan, and Turkey”, funded by the European Union, the Regional Trust Fund in response to the Syrian Crisis (the EU Madad Fund), and started delivering soilless agriculture kits to 100 Turkish and Syrian households living in Gaziantep. The project aims to contribute to women’s and men’s access to livelihoods and improve households’ nutrition and dietary diversity.

Prior to starting soilless agriculture, UN Women provided trainings on micro-gardening and how to use the kits, along with information around women’s rights and gender equality.

Coming in the shape of an indoor hydroponic system, the soilless agriculture kits are suitable for sunless indoor spaces. Even though many did not have a balcony or terrace, they could still benefit from the kit and grow the vegetables in their living rooms.

Since getting his kit four months ago, Emre Erhani*, a Turkish beneficiary, has also started eating home-grown veggies. “I always wanted to growing vegetables at home. Thanks to the project we can grow and eat healthy veggies. The taste is much better than the ones we buy from the market. The first harvest was at the end of the first month, we used them for our breakfasts and salads. At the end of the second month, we harvested a lot more vegetables. We even made the traditional Lahmacun. The taste was incredible. Micro-gardening covered our vegetable needs for at least two months,” he says.

“Micro-gardening is an effective way to access affordable and quality food for Syrian and host communities. Micro-gardening specifically supports women, as they are more likely to spend income on food; and the distribution of food may favour men over women. As we aim to further strengthen the resilience of vulnerable Turkish and Syrian women, we prioritized single mothers and women heads of households in this project.” says Özgür Koç, Programme Associate at UN Women. “It allows for the intensive cultivation of a wide range of vegetables, roots, and tubers, as well as herbs in small spaces, such as balconies, patios, rooftops and even living rooms or kitchens,” he adds. One square meter of a micro-garden can produce around 200 tomatoes, 200 onions, 40 cabbages, 216 lettuce.

According to a baseline survey UN Women conducted, which covers the period between April-June 2019, 41 per cent of the Turkish and Syrian project beneficiaries reported poor and borderline levels of food consumption, where only 10 per cent of the beneficiaries have an income-generating job.

“Soilless agriculture allows vulnerable Turkish and Syrian households to meet their needs for vitamins, and minerals by providing direct access to fresh, nutritious vegetables every day. During the lockdown, they could grow and eat vegetables without going out,” says Koç.

Related News
20/04/2018
From Where I Stand: “I am proud to be the voice of refugee women”
20/10/2017
Press Release: Women’s economic empowerment is a pre-condition for the achievement of the Sustainable Development Goals, say government and business leaders in Turkey
18/10/2017
Take Five: I followed my dreams to work for a society for everyone
29/02/2016
International Women's Day 2016
14/11/2022
Turkish public officials trained on gender responsive budgeting
END_OF_DOCUMENT_TOKEN_TO_BE_REPLACED