Under the theme “Planet 50-50 by 2030: Step It Up for Gender Equality”, this year’s observance will reflect on how to build momentum around the new Sustainable Development Goals, and related gender equality commitments as part of UN Women’s Step It Up initiative. 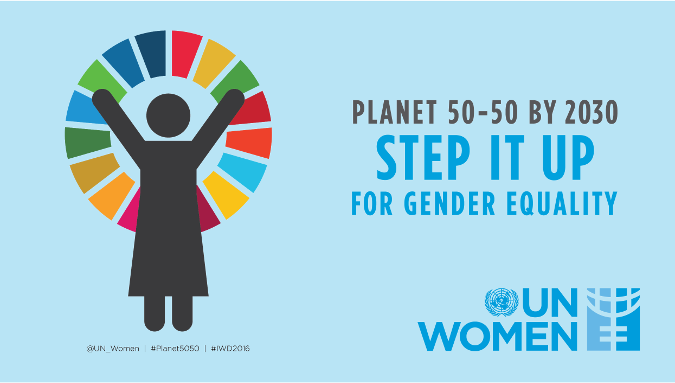 On 8 March, UN Women offices in Europe and Central Asia will join the global call to “Step It Up for Gender Equality.”

This year’s theme, Planet 50-50 by 2030: Step It Up for Gender Equality, asks countries to act on the 2030 Agenda and begin work on the UN’s new Sustainable Development Goals (SDGs) . It also seeks new commitments to gender equality, women’s empowerment, women’s human rights and UN Women's Step It Up initiative.

From organizing street rallies, art exhibitions, film screenings to creating platforms for public debates on women’s rights and gender equality issues, UN Women offices across Europe and Central Asia region is stepping it up with a broad range of events to celebrate International Women’s Day this year.

Events in Europe and Central Asia

UN Women Regional Office for Europe and Central Asia in Istanbul will Ring the Bell for Gender Equality to open the Istanbul Stock Exchange (Borsa Istanbul), host for the event, together with UN Global Compact, International Finance Corporation (IFC) and other partners in the country. The event will aim to raise awareness of gender equality and women's empowerment for sustainable businesses, and to increase the number of Women’s Empowerment Principles (WEPs) signatories in Turkey.

In Bosnia and Herzegovina, UN Women will launch a competition among journalists for the best news features on women’s rights and the SDGs. In Georgia, Woman in Focus Documentary Film Festival, supported by UN Women, will promote female artists and directors and create a platform for public debate on women's rights, voices, art and issues. High-profile events in Moldova will include a public forum where UN Women will bring together successful women and girl leaders and political decision-makers to share their views on Moldova’s development priorities and women`s empowerment. In Kosovo*, UN Women and the Office of the UN Development Coordinator will organize a workshop on the implementation of the SDGs. One of the biggest events in the former Yugoslav Republic of Macedonia will be a National High-level Conference on the 10th anniversary of the adoption of the Law on Equal Opportunities, where implementation of the Government’s Step it Up commitment will also be discussed.

“Despite progress in Turkey, especially in national legislation, the country still has the lowest labour force participation rate for women in Europe. Moreover women comprise only 14.7% of the membership of the Turkish Parliament which is well below the global average...In this context, the UN urges the Government of Turkey to step up its efforts to close the large gender gap in women’s economic and political participation.” say UN Women Regional Director for Europe and Central Asia and Representative to Turkey, Ingibjorg Gisladottir and UN Resident Coordinator for Turkey, Kamal Malhotra in their joint message for International Women’s Day 2016.

Throughout history, women have made extraordinary contributions to their societies. Some are well known, some less so, but all have been trail blazers. Explore a selection of these women and learn what the reality still is today for many women and girls worldwide. View timeline »

International Women’s Day first emerged from the activities of labour movements at the turn of the twentieth century in North America and across Europe. Since those early years, International Women’s Day has assumed a new global dimension for women in developed and developing countries alike. The growing international women’s movement, which has been strengthened by four global United Nations women’s conferences, has helped make the commemoration a rallying point to build support for women’s rights and participation in the political and economic arenas.

Increasingly, International Women’s Day is a time to reflect on progress made, to call for change and to celebrate acts of courage and determination by ordinary women who have played an extraordinary role in the history of their countries and communities.