Before the COVID-19 pandemic, rural women in North Macedonia already worked more hours every day than men, much of this time unpaid. Now, the health crisis has increased their workload and they are also struggling to access health services and other support. It’s important that the critical progress made to empower North Macedonia’s rural women be sustained despite the pandemic, experts say. 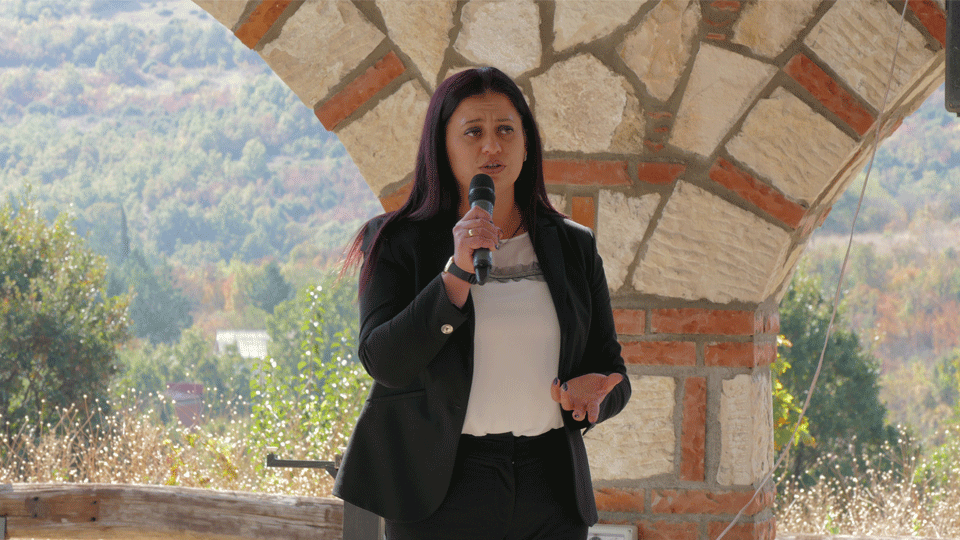 Vaska Mojsovska, President of the National Federation of Farmers during the marking of the International Day of Rural Women in 2018. Photo: UN Women/Ognen Dimitrovski

According to a study on women’s empowerment in agriculture by the Faculty of Agricultural Sciences and Food at the Ss. Cyril and Methodius University in Skopje, supported by UN Women, the country’s rural women work an average of 11.06 hours a day, with 41.7 per cent of this total workload unpaid. In contrast, men work an average of 9.68 hours a day, mostly paid. “Now, because of the health crisis due to the COVID-19, women’s work has increased,” says Vaska Mojsovska, the first woman President of the National Federation of Farmers (NFF).

Two recently completed field analyses done by the North Macedonia’s National Federation of Farmers, supported by the Swedish development organization We Effect, on the impact of COVID-19 in agriculture, show that the unpaid work for women has increased. 85 per cent from the total of 175 women members of the National Federation of Farmers, stated that their work increased due to the lack of seasonal agriculture workers, which leaves women to perform all duties in their homes and farm fields. The analyses also note that there is a lack of healthcare facilities and health workers to respond to the needs of women in rural areas. Women from rural areas usually do not have pensions and therefore also fall into COVID-19 risk groups.

Frosina Gjorgievska (53) from Resen, a small city in the south-west part of North Macedonia is one such woman who bears the burden of multiple responsibilities in the field, community and at home. A graduate in food and biotechnological engineering, she works at the Association of Fruit Growers in her hometown and is a national coordinator of the Network of Women Farmers within the NFF. Frosina has been working on soil analyses since 2006 and is also a registered agricultural producer. Together with her family, they are devoted to growing apple trees. Three years ago, Gjorgievska and her co-workers formed a group of 20 women who are active agricultural producers. 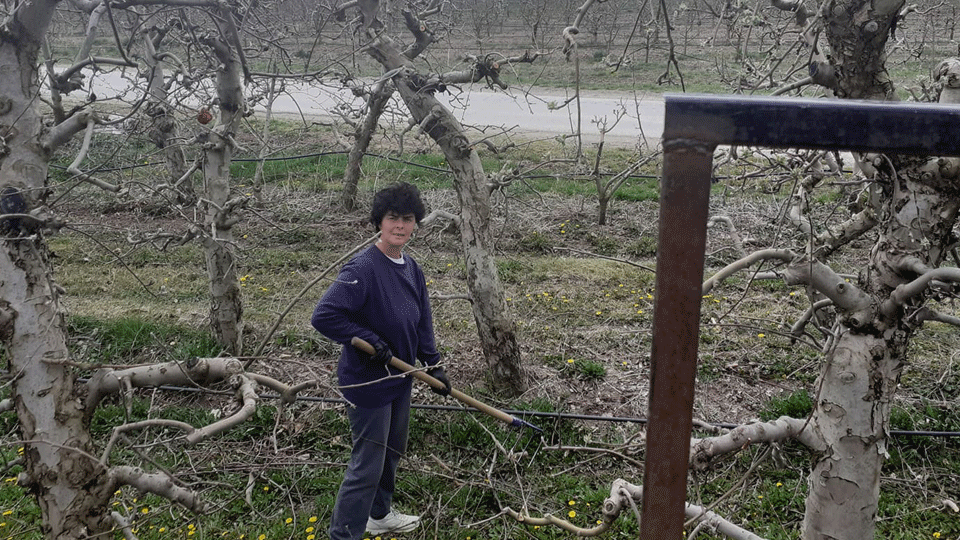 “My working day depends on my daily schedule. If I am at the lab, I work from early in the morning till late afternoon, and then I continue working on our fruit farm. There is work to be done year-round. The only time when we cannot use machinery is during the harvesting period. Then it is necessary for the whole family to work, and use additional help,” Gjorgievska says. On top of that, she adds, there is still work to be done at home. “My day does not exclude the housework like cooking, washing clothes … Since I am active in the NGO sector, I also have meetings with our members in the Association,” she says. However, we are very worried about how things will be if the COVID-19 crisis continues for long, and about what will happen during the harvest and how to proceed forward,” concludes Gjorgievska.

Even before the added burden of the pandemic, rural women like Gjorgievska faced a number of challenges, including social exclusion, unemployment, gender discrimination and unequal distribution of income and resources. Traditional norms still hold great sway, leading to a lack of agricultural land and property for women as well as paid parental leave. Women still have limited access to education, information, health care, public and social services. Such conditions force women in rural areas to live in greater poverty and encourages migration.

“Only 5 per cent of women in rural areas are owners of land and property, which shows how much they are fighting for their rights. According to the laws, they have the right to claim part of the land from their parents, but usually they do not, because of their belief that sons, not daughters, should inherit the property, and the trend continues to this day,” says Mojsovska.

Тhe study by the Faculty of Agricultural Sciences and Food echoes what Mojsovska says. It shows that while women make up one-third of the agricultural workforce, their participation in the management of agricultural holdings is very low, indicating that their involvement in decision-making processes is also limited.

“Women in agriculture are the invisible pillars in rural communities who silently fight for their own and the survival of their families, but their voices are not heard in their communities. They continue to face numerous challenges in the area of information, education, employment, and socialization,” says Biljana Petrovska-Mitrevska, activist and Project Manager at the National Federation of Farmers. These challenges are now amplified because of the COVID-19 pandemic and government-led measures to support women are more important than ever. 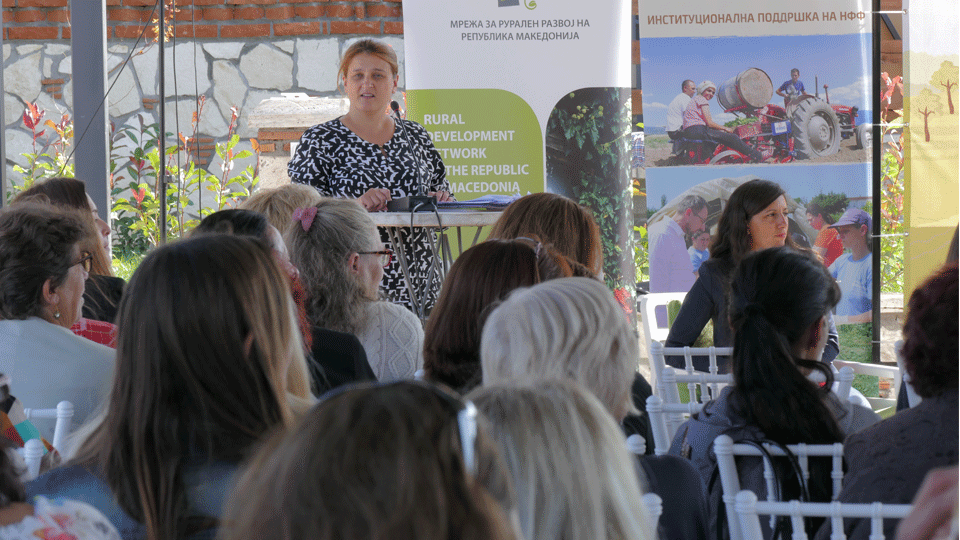 Biljana Petrovska-Mitrevska, activist and project manager at the National Federation of Farmers during the marking of the International Day of Rural Women in 2018. Photo: UN Women/Ognen Dimitrovski

“The NFF advocacy activities and demand of accountability from policy makers has united women in rural areas in the fight against discriminatory policy measures and full realization of their rights”, notes Petrovska-Mitevska. As a result, their voice has been heard, not only by the international community but also by institutions, which began to consider their proposals and recommendations in creating effective measures. “This can be seen in the work of the Working Group for Gender Equality, where the given initiatives by the non-governmental sector are starting to grow into policies and measures,” she says.

UN Women in North Macedonia, under a Memorandum of Understanding with the Ministry of Agriculture, Forestry and Water Economy, supports the work of the Working Group for Gender Equality within the Ministry. This support is part of the UN Women project “Promoting Gender Responsive Policies and Budgets: Towards Transparent, Inclusive and Accountable Governance in the Republic of North Macedonia”,  funded by the Swiss Agency for Development and Cooperation and the Swedish International Development Cooperation Agency – Sida.

Related News
11/08/2020
In Bosnia and Herzegovina, agribusinesses run by women help villages survive
28/04/2020
In the words of Jelena Ruzic: “Economic losses will be tremendous, and women farmers do not even dare to calculate them now”
26/11/2019
Turning policy recommendations into practice: North Macedonia fosters the economic empowerment of women in agriculture
13/10/2017
Across the Western Balkans, rural women are influencing local budgets and shaping progress
18/05/2022
Families start businesses, redistribute chores, and transform gender norms in Kyrgyzstan
END_OF_DOCUMENT_TOKEN_TO_BE_REPLACED