Four military servicewomen told about their experiences as military peacekeepers in UN peacekeeping missions in the Central African Republic and South Sudan. The discussion took place through a video conference entitled “Women's Participation in Peacebuilding: The Prospects of Military Servicewomen as Peacekeepers”, organized with the support of UN Women Moldova.

This story has originally been published by UN Women in Moldova. 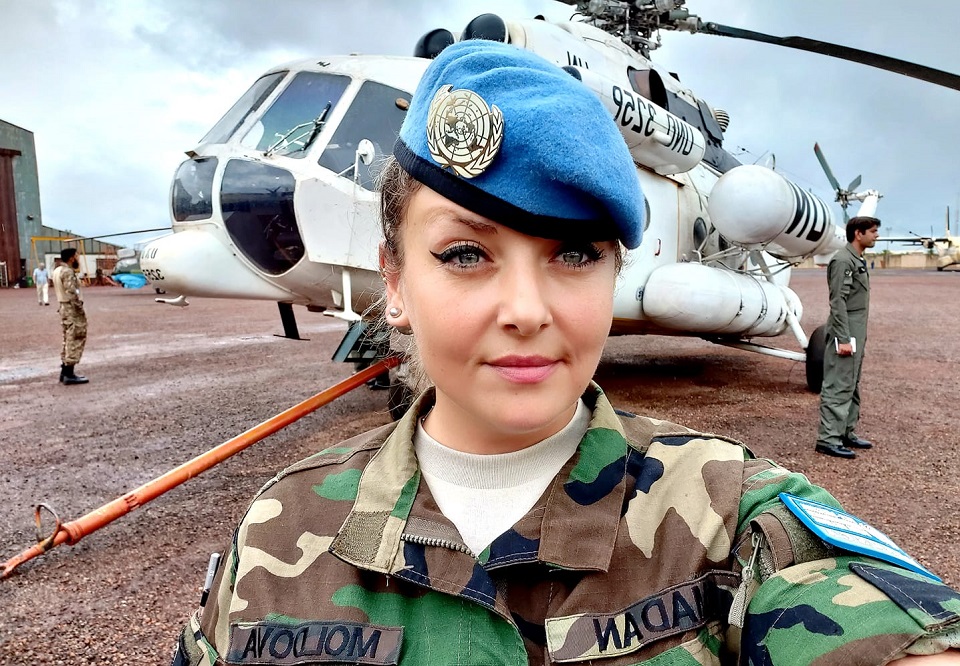 Lieutenant Colonel Iulia MADAN has been in military service since 2001, holding several positions. Iulia's last function was in the international cooperation sector. She participated in the peacekeeping missions “MINUSCA” in the Central African Republic twice, during 2014-2016 and 2018-2020.

“Once I reached the end of my first term, I had a definite goal, namely - to return and personally monitor the process of restoring peace in that conflict zone, and to my great fortune, two years later I returned to the African continent within the same missions, in the Central African Republic. I came back with a much richer experience, obtained during the first term. I was much more confident in my own strength and, at the same time, enthusiastic about the new challenges. I had the opportunity to work in teams with real professionals who had a rich experience in this field. Thus, I have developed my professional skills enormously” — says Iulia.

“Unfortunately, most often victims of conflict become vulnerable people who cannot ensure their security on their own — especially women and children. If we talk about the effectiveness of the detachment of a military woman in peacekeeping operations and in activities to collect information in the field, through interaction with the local population in the conflict zone, her presence in a team of observers is more than necessary and important. Of course, I also mean taking all measures for protection, prevention and rehabilitation. Moreover, we are an example for those who need to look beyond the limits set by a society dominated by violence, as well as a stimulus for women in these conflict zones.” Now, Iulia continues her military service in her native community, within the National Army, but certainly, her experience in the two missions is irreplaceable. 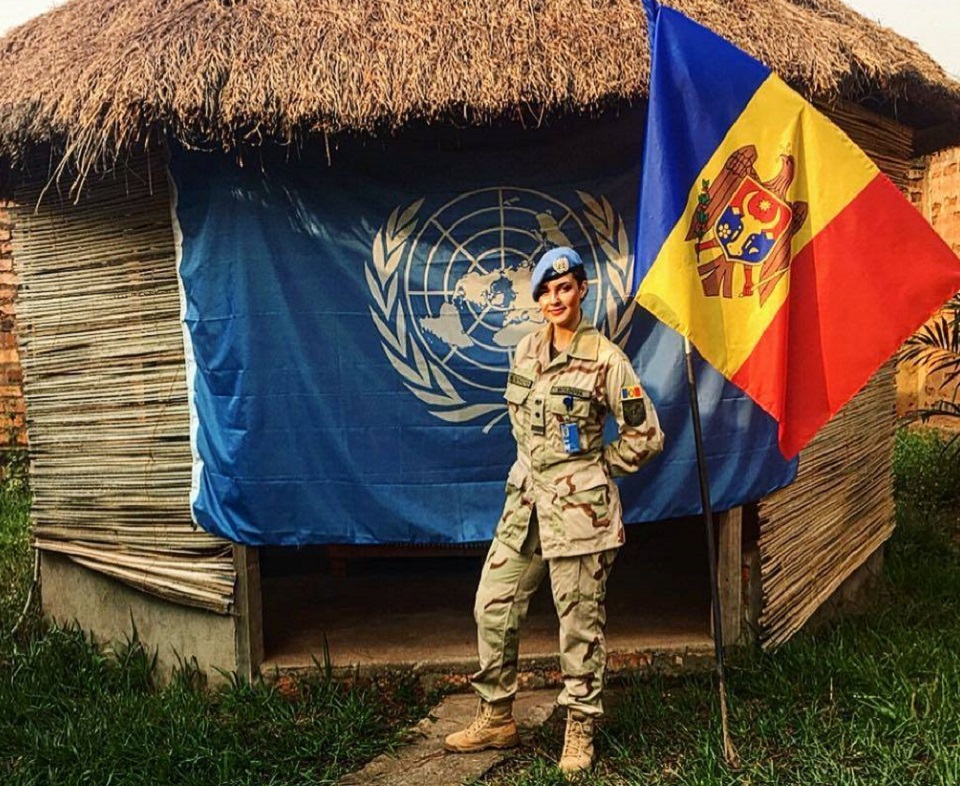 “I ended up in this mission thinking that I would be a military observer, but once the protection advisor studied my CV and understood that I also passed a gender counselling course, he considered that for seven months I would be a gender adviser.This function involves the collection of security and analysis information according to the risks and dangers which represent or are subjected to different gender categories (young boys, virgin girls, middle-aged men, etc.). The function also includes assessing potential risks that may harm the mission or the local population and identifying effective methods of carrying out the mandate of the mission, taking into account the above-mentioned risks and dangers.

For example, in different regions, boys aged 8-13, whose parents were killed in the 2014 conflict, were enrolled in paramilitary groups and trained as soldiers. The youngest soldier boy I met was eight years old. I worked with him a lot to change his vision and to get him out of that paramilitary unit where he was enlisted.

In other regions, we found that virgin girls are also at risk because before large-scale armed actions, they were sold by their parents to paramilitary subdivisions. For that society, it was a traditional and normal thing. By detecting this phenomenon, we have actually achieved two goals related to the internal security of the mission, but also to the security of the population and the execution of the mandate to protect the civilian population.

Many efforts have also been made to combat the phenomenon of sexual violence. For this, I had to pass specialized courses while I was on mission” – tells Elena about her experiences in the peacekeeping mission.

As a continuation of the thoughts exhibited by Iulia MADAN about the importance of posting women in peacekeeping missions, Elena referred to a case involving a man, victim of sexual violence, used as a weapon of war. He refused to talk to military men and mentioned that he would only give statements to a female person who must be from outside Africa. "So there are cases when the local population itself asks to cooperate with women from the mission" – concludes Elena.

Two other military women told us about their experiences in the UN mission in South Sudan (UNMISS), one of the five most dangerous countries in the world, especially for women, as genital mutilation is also practised there. It is a country in continuous war, with the worst humanitarian situation in the world. 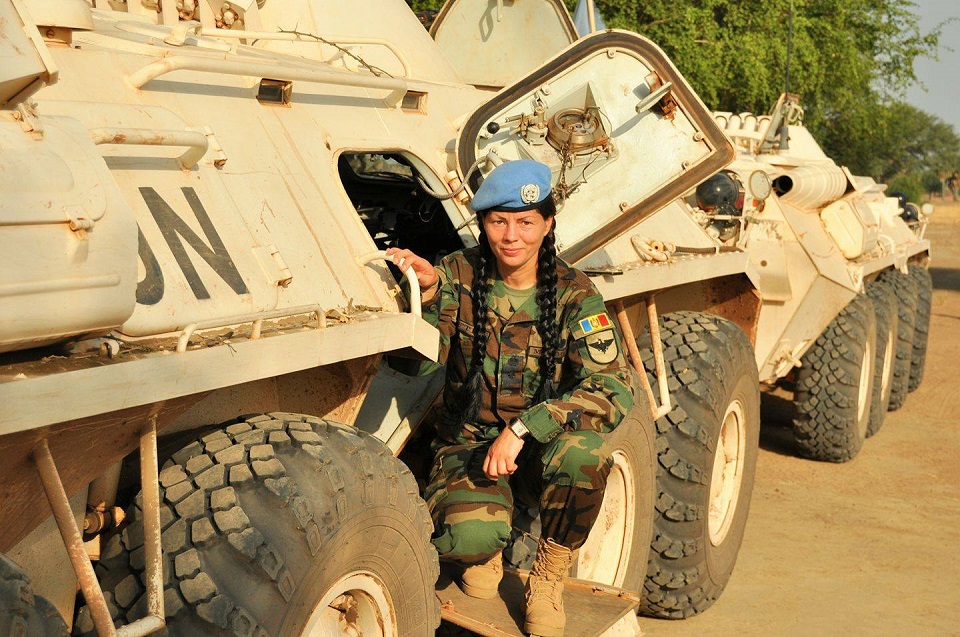 Major Natalia LEFTER has been in the National Army for more than 11 years and has obtained a doctorate degree in pedagogical sciences, being also an associate professor, master of judo and sambo sports. Natalia returned home almost a year and a half ago, continuing her military service in the Main Headquarters of the National Army and being deeply marked by her experience as a peacemaker.

“My dream was to go on a mission under the auspices of the UN to feel useful, to be a proud military woman because I could contribute with my experience to maintaining peace in the world, but everyone said to me: “Natalia, you are a physical training specialist, you don't stand a chance”. However, I went ahead studying all theoretical and practical aspects to be enlisted for the given mission. You always have a chance, if you believe in yourself.

Whether you're a military woman or a military man, the responsibilities both in missions and at home are the same. Sometimes the military woman is given even more tasks. During the patrols, I interacted with several women: mothers, teenagers, children, and all of them needed communication and support from a  morally and physically strong woman. Women need a model that can give them the confidence that every person, regardless of their status, colour, ethnicity, race or religion — can become strong.” — she says.

Natalia argues that “If you want to have good achievements in the mission, you need to be strong, be independent and be guided by the inner strength that will help you overcome any obstacles and difficulties. Never settle for the little you have, be ambitious, be strong, overcome yourself and accept life's challenges.” 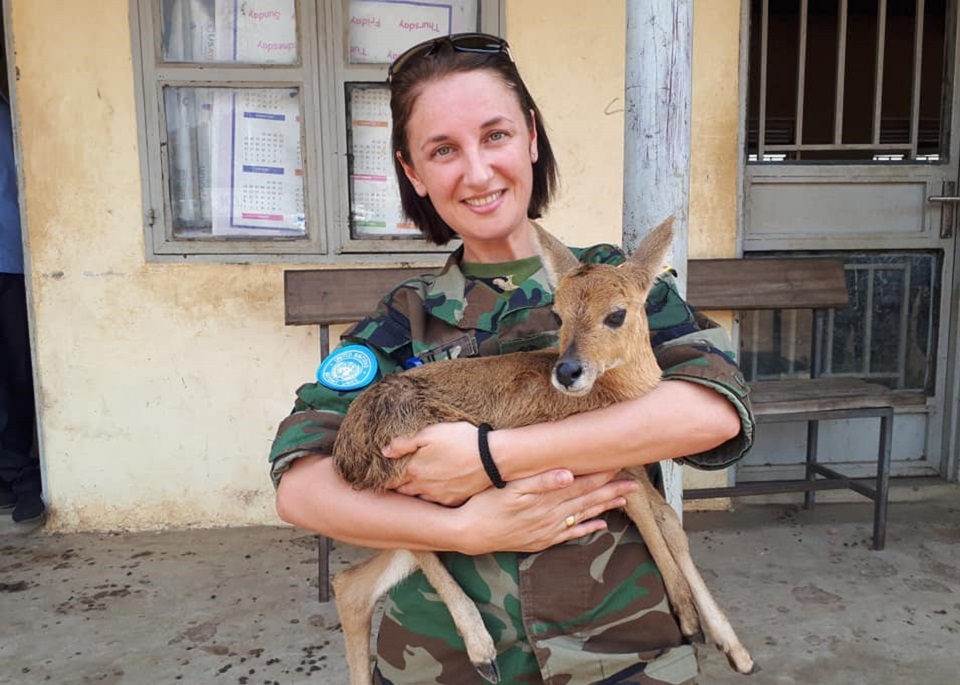 Captain Tatiana SIRGHI, who returned five months ago from South Sudan, where she worked as military observer: “I have been in the armed forces since spring of 2010. During these 10 years, I had the opportunity to understand what a military woman represents. Here things come by themselves, our progress is our success. I urge my colleagues to apply for a military mission because they have a beautiful career ahead of them. I tried to tell my children about this experience to make them understand that they are the luckiest children on the face of the earth because we are in an area free of open conflicts and that they have everything they need for a happy life — they have the opportunity to study and enjoy a wonderful future” — Tatiana shared.

Year 2020 marks the 20th anniversary of UN Security Council Resolution 1325 on Women, Peace and Security. The resolution reaffirmed the importance of equal participation and full involvement of women in the process of maintaining and promoting peace and security.

In March 2018, the Government of the Republic of Moldova approved the National Programme for the implementation of UN Security Council Resolution 1325 on Women, Peace and Security for 2018-2021, as well as the Action Plan on its implementation. The National Action Plan recognises the important role women play in strengthening peace and security and proposes concrete steps to remove identified barriers that reduce the representation and influence of women in the security system.

Related News
20/05/2022
Meet Yaroslav, a young Ukrainian refugee with disabilities who dreams of becoming a DJ
20/04/2022
Stronger together: The refugees finding peace and humanity in Moldova
14/04/2022
From Where I Stand: Svetlana Babaș, Ukrainian Roma refugee
13/04/2022
Collecting data and analysis on how the war in Ukraine is impacting women and girls
13/04/2022
Women flee Ukraine, but hope for peace so they can return to their homes
END_OF_DOCUMENT_TOKEN_TO_BE_REPLACED