Home is the most dangerous place for women, new study in Serbia shows

According to the study, more than 74 per cent of femicides in Serbia take place in the family or are committed by intimate partners. The study concludes that home remains the most dangerous place for women, with 68 per cent of femicides taking place in the home of the victim and/or the perpetrator. The study was conducted under the EU-UN Women regional programme on ending violence against women in the Western Balkans and Turkey, “Implementing Norms, Changing Minds,” funded by the European Union. 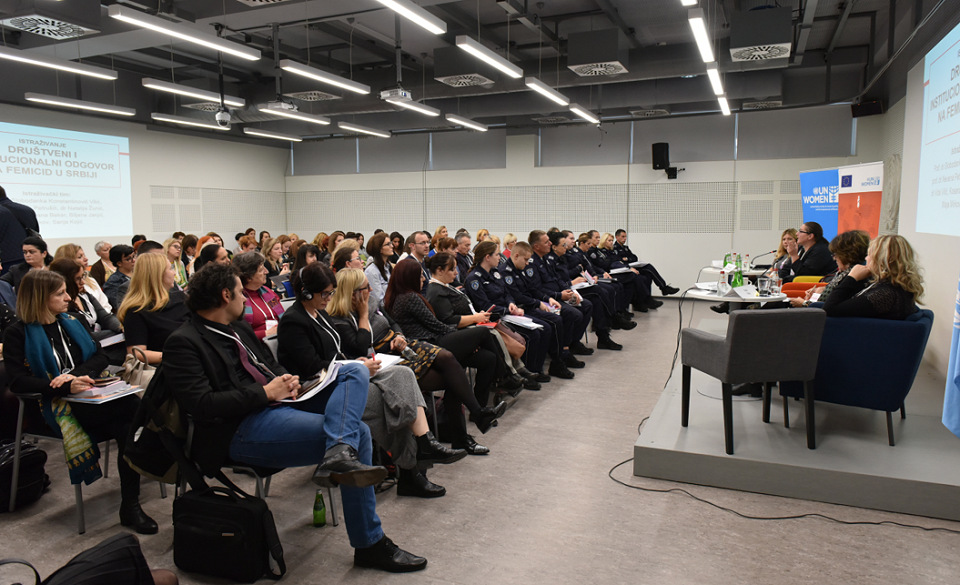 On 14 November, representatives of government ministries, UN agencies, EU Delegation in Serbia, and civil society organizations came together at the UN House in Belgrade, the capital, for the launch of a new interdisciplinary study on femicide in Serbia. The study, entitled Societal and Institutional Responses to Femicide in Serbia (part I), (part II), examines the causes, triggers, and responses to cases of femicide. The result of year-long research, the study was based on an analysis of court judgments from high courts, case studies, in-depth interviews with perpetrators, and an analysis of the capacities of Serbian institutions to respond to and collect data on cases of femicide.

The study shed a light on a number of important trends, among them the following: more than 74 per cent of femicide killings take place in a family or intimate partner context and 49.3 per cent are killings of spouses or out-of-wedlock intimate partners. Home remains the most dangerous place for women given that 68 per cent of femicides take place in the home or yard of the victim and/or perpetrator.

These killings are marked with particular brutality, and more than half of them (50.7 per cent) are classified as aggravated murders. Nevertheless, in only 10 per cent of cases, the perpetrator received a maximum sentence of 40+ years.

Almost half of femicide victims (47.1 per cent) who suffered violence before their murder did not report it to the authorities.

Femicide is the most extreme form of violence against women – one that ends in death. It is gender-based murder, a killing of a woman simply because she is a woman; a misogynistic act committed by men who are motivated by hate, disdain, as well as a feeling of ownership and superiority over women.

In Serbia, like in most countries, cases of femicide are not tracked systematically.

The study was a part of the project Preventing and Uprooting Femicide in Serbia, which is implemented by the Gender Knowledge Hub, FemPlatz and Women’s Research Center for Education and Communication. The project is part of the EU-UN Women regional programme “Ending Violence against Women in the Western Balkans and Turkey: Implementing Norms, Changing Minds,” funded by the European Union.

The event was opened by the Ministry of Interior (MOI) State Secretary, Ms. Biljana Popović Ivković. “Looking at the figures available to the MOI, the number of women killed in Serbia each year, from 2000 until today, is constant. If we see the same number of victims each year, that is an indication that no one has addressed this problem seriously,” explained Mrs. Popović Ivković. To confront violence against women, the whole society must get involved, including state institutions, the media, civil society, and the public at large, the State Secretary asserted. The Ministry of Interior is working “together with UN Women implementing the project Improving Safety of Women in Serbia, which is meant to increase the knowledge and skills of police officials, responsible state bodies, and judicial actors necessary for the initiation of a new safety measure – the bracelet system for victims and perpetrators of violence, which would prevent perpetrators from disobeying restraining orders and having further contact with the victim.”

- statistics offered by Ms. Popovic Ivkovic, State Secretary, Ministry of Interior of the
Republic of Serbia.

“Gender inequality and gender-based violence are two sides of the same coin and have to both be addressed at the same time,” explained Ms. Mateja Norčić Štamcar, Deputy Head of EU Delegation to Serbia. “Violence against women is violence against half of Serbia’s population. The way we deal with these problems is an indication of whether we live in a just and lawful society. The EU has always been a major force behind efforts to protect those who are vulnerable. It is for this reason that we have supported the regional programme “Ending Violence against Women in the Western Balkans and Turkey: Implementing Norms, Changing Minds”, through which this study was also made possible,” Ms. Štamcar continued.

Ms. Olja Janković Leković, Project Officer at UN Women in Serbia, addressed the audience: “I sincerely hope that the findings of this study will serve as a motivator for the institutions to reconsider current procedures, policies and decisions in order to better address the issue of femicide. Feelings and fears of the victims of violence should be at the center of all interventions by institutions responsible for addressing this problem.”

The authors of the study provided clear recommendations for preventing femicide and achieving justice for victims, including codifying femicide as a special type of crime with a clear definition, strengthening the capacities of institutions tasked with responding to cases of violence against women, and introducing special protocols for the actions of authorities and institutions processing cases of femicide. The authors also suggest improvements in data collection and the methodology of forensic examination at the scene of the crime.