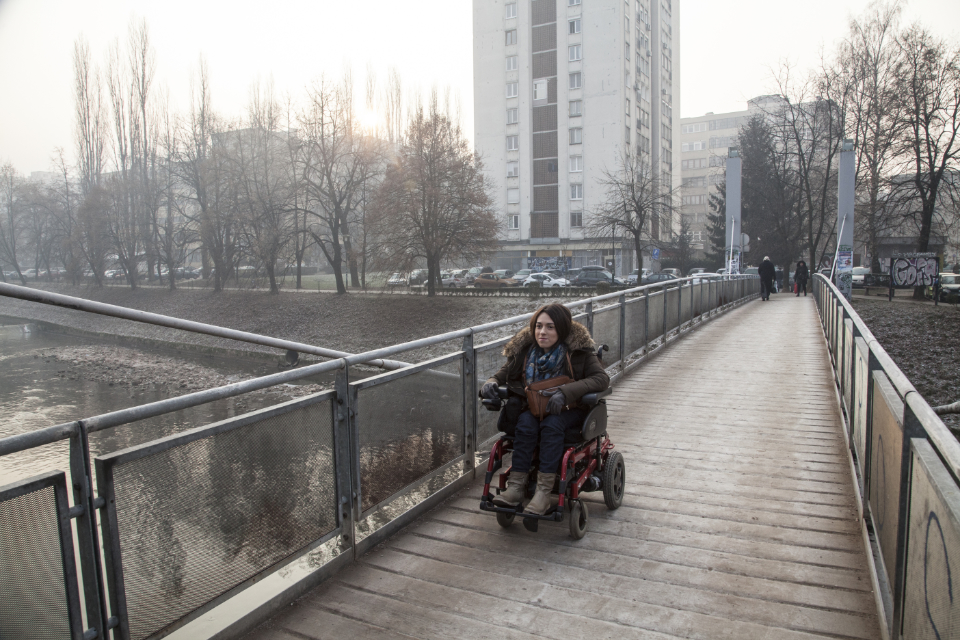 Intersectionality is the recognition that women can experience discrimination on the basis of multiple and intersecting identities. According to the UN Committee on the Elimination of Discrimination against Women (CEDAW) and the Council of Europe Convention on preventing and combating violence against women and domestic violence, also known as the Istanbul Convention, ethnic minority women, elderly women, women living in rural or remote areas, women with disabilities, migrant women, women in prisons and women and girls on the streets are particularly vulnerable and open to discrimination.

“This is a day where we all can discuss, learn and build solidarity to promote action on disability issues and to mobilize support for the well being of women living with disabilities. As you are facing multiple forms of discrimination and challenges, which during COVID-19 are further compounded, we want to hear your priorities and recommendations so that we can incorporate them into our programming and address collectively the issue of violence against women with disabilities,” said Blerta Cela, the Deputy Regional Director of UN Women Europe and Central Asia, while addressing the women with disabilities that participated in the webinar.

“In November 2020, the European Union adopted the new agenda Action Plan 3 (2021-2025) that recognizes the intersectionality of gender with other grounds of discrimination, such as disability. It highlights the necessity of the implementation of the laws and policies that respond to the specific needs and the circumstances of women in different groups. That's why it's important to talk about how different groups of women are impacted by violence, especially within the context of the COVID-19 crisis,” said Kay Binder, Policy Officer within the Directorate-General for Neighbourhood and Enlargement Negotiations, Western Balkans Regional Cooperation, European Commission.

Despite the ratification of the Istanbul Convention in the Western Balkans and Turkey (except Kosovo*), women living with disabilities are exposed to higher levels of discrimination and violence occurring both in the private and public realms. They also encounter multiple inequalities and discriminations when seeking women’s support services, which are inadequate, inaccessible, or do not meet the standards outlined in relevant international conventions.

The disproportionate rate of violence, including digital violence, was exacerbated by the outbreak of COVID-19, as quarantine measures left women and girls with disabilities continuously exposed to violent partners or family members. Biljana Brankovic, member of the Council of Europe's Group of Experts on Action against Violence against Women and Domestic Violence (GREVIO) said: “GREVIO recommended to several countries to integrate the perspective of different groups of women, including women with disabilities into the design, implementation, monitoring and evaluation of comprehensive and coordinated policies for preventing and combating violence against women. This implies that no policies on women with disabilities victims of violence should be created without taking into account their voice and opinion.”

As a good practice sharing, Ms. Brankovic mentioned that, after GREVIO’s advocacy efforts and call for the full respect for women's rights to self-determination, forced sterilization of women and girls with disabilities is eradicated in Spain and such procedure may be only authorized under ‘exceptional circumstances’. The GREVIO member highlighted the importance and power of networking when shadow reporting, as the prohibition of forced sterilization in Spain was brought in front of GREVIO by a coalition of 252 organizations representing women with disabilities.

Some of the abovementioned problems, e.i. a lack of available information on their rights and discrimination among service providers, impede women with disabilities from reporting violence and contribute to the low reporting rates observed in all countries of the region.

Florida Kalemi, Project Coordinator at Albanian Disability Rights Foundation, partner of the regional programme on ending violence against women in the Western Balkans and Turkey “Implementing Norms, Changing Minds,” mentioned that the challenges faced by women with disabilities multiplied since the COVID-19. “In this regard, service providers should embrace remote approaches when responding to the needs of women with disabilities who experience violence, either through mobile teams or online services and, secondly, it is important to create online interactive and accessible web platforms to support women with disabilities or women victims of violence,” concluded Florida Kalemi.

Other recommendations raised by CEDAW and GREVIO include:

“We are living now in a pandemic, so we need to involve women with disabilities also in the response to the pandemic. ‘Nothing about them without them’ is very important. The ‘leave no one behind’ principle means to ensure the consideration of women and girls with disabilities, especially during this historical moment,” hammered Ana Peláez Narváez, CEDAW member.

The event concluded with the screening of a 12-minute short movie “Liberation” directed by Veronica Andersson and screened during the film festival “Seize the Film!” in presence with Milesa Milinkovic, the Director of the movie festival who recalled the importance of art to changes perspectives towards women with disabilities. The movie highlights the lack of access to sexual and reproductive health services for a young lady with hearing impairments and the many challenges she encounters to abort after being raped.

This webinar, organized by the European Union, the Council of Europe, and UN Women, was the second one in the series "A thousand ways to solve our problems: Preventing and responding to violence against women from an intersectional perspective in the Western Balkans and Turkey," organized within the framework of the EU-UN Women programme “Ending violence against women in the Western Balkans and Turkey: Implementing Norms, Changing Minds.”

Related News
17/10/2011
UN Women has discussed labour migration and VAW with Russian journalists
02/02/2023
Interview: “Social norms are the hardest to change when it comes to sexual violence”
23/01/2023
In the words of Lindita Kozmaqi Piraj: “Domestic violence is no longer a taboo topic in our town”
23/12/2022
New protocol for responding to sexual violence cases launched in Kosovo
08/12/2022
In the words of Mrika Nikçi: “Even though he left me with trauma, I know I am strong enough to overcome it.”
END_OF_DOCUMENT_TOKEN_TO_BE_REPLACED