What happened after COVID-19: Serbia

Even before the COVID-19 pandemic hit, 243 million women and girls globally were abused by their intimate partners in the past year. Since the pandemic, with lockdowns measures, countries around the world have seen an alarming rise in reporting on violence against women, especially domestic violence. UN Women is working with women on the front lines who are responding to the shadow pandemic of violence against women and girls every day. “What Happened after COVID-19 hit”, brings you some of their stories, and how our programmes are backing solutions that leave no one behind. 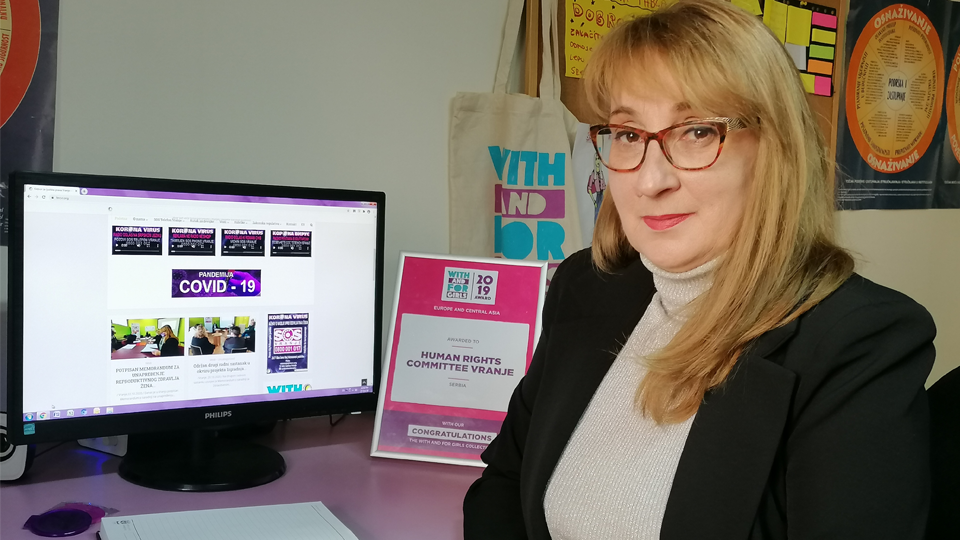 After an eerie quiet at the onset of the state-imposed curfew, a flood of calls came in on our SOS helpline. Victims were facing locked doors at state institutions, lack of clarity about availability of services and protection during the curfew, as well as difficulty accessing safehouses. They also experienced increased dismissals of their claims and occasional unveiled threat by the very institutions tasked with protecting them. ‘When someone calls to report violence too often, we start to follow them’; ‘we asked around about you’; ‘we’ve seen the photos’ were just some of the intimidating comments victims received when they sought help.

Perpetrators also quickly sensed and exploited the void the pandemic created. ‘I dare you to leave the house! Do you have $500 for the fine [for breaking the curfew]? One victim told us about how her abuser taunted her during the lockdown.

Some of the key state leaders, all men, addressed perpetrators threatening them with the law. But, as one of our beneficiaries explained, “We all know about the Law. It does not stop him from harassing me. Who will protect us with the virus all around?!”

Hearing these and similar stories prompted us to act. We addressed a letter to the Serbian Government and a number of key state institutions alerting them to the newfound situation on the ground and requesting that certain measures be taken.

In the letter, we informed authorities that victims needed to hear a message of support from women leaders. Secondly, the government needed to introduce amendments to the state of emergency measures, allowing victims of domestic or partner violence to leave their homes if they find themselves in a life-threatening situation, without any fees or legal ramifications. Finally, impediments to safehouse access during the pandemic needed to be addressed.

Soon after, Deputy Prime Minister, a woman, took the stage and addressed the victims, urging them to report violence and assuring them of State support in their hour of need.”

UN Women responds through programmes on the ground

Human Rights Committee Vranje, with Suzana Antić Ristić at its helm, has served women victims of violence in Serbia for almost 20 years. Thanks to the nimble assistance of UN Women’s Improving Safety of Women in Serbia project, which provided them with emergency funding, the Committee managed to remain in operation during the pandemic-triggered lockdown. This allowed them to immediately learn of new obstacles facing victims and to make informed recommendations regarding gender sensitive messaging, prevention, and maintenance of key services to victims of domestic violence.

In direct response to the Committee’s letter alerting the government of the situation and suggesting concrete action, the Commissioner for the Protection of Equality submitted an official Initiative to the Government to amend the decree on emergency measures for victims of domestic and partner violence. Although amendments were not introduced, the Committee remains positive that their requests will be considered should a state of emergency be reinstated.

Related News
07/12/2021
Take Five: “It is crucial to strengthen the capacities of institutions to provide online support to women survivors of violence”
16/11/2020
We continue to create the right environment for rural women to live a better and safer life
16/11/2020
What happened after COVID-19: Albania
08/09/2020
In the words of Biljana Stepanov: “To help women stay safe, we are developing a mobile SOS app to report violence”
01/06/2020
Women confront pandemic-related violence against women across Europe and Central Asia
END_OF_DOCUMENT_TOKEN_TO_BE_REPLACED