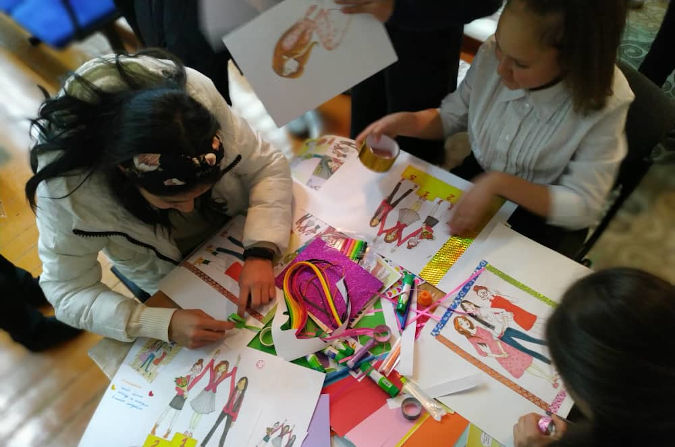 Children working on the alternative story of the comic book. Photo: UN Women in Kyrgyzstan

On 12 November 2019, the comic book Kalys was presented in the Kyrgyz State Art Museum during the Bir Duino Kyrgyzstan Festival with a reading, discussion and interactive creative session, bringing to light ways of tackling the problem of kidnapping for forced marriage.

Kalys tells the stories of three teenage girls - Kalys, Zharkyn and Tynym – who were kidnapped and forced into marriage. Two of these stories are based on real life. Their different experiences allows the reader to learn about ways to fight the practice of kidnapping for forced marriage. This innovative book delivers a strong message about the importance of parents’ support and police responsiveness.

It was developed through the Across Generations and Gender Borders – Communities Combating Gender-Based Violence in Kyrgyzstan project. This project is funded by the European Union and implemented by UN Women in Kyrgyzstan in partnership with HelpAge International and Agents of Change. 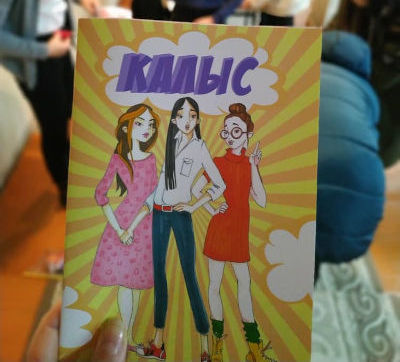 School children aged 14 and over attended the event, alongside politicians, public figures and representatives of public organizations. During the event, children asked questions about violence, its consequences, and prevention activities.

The comic book discussion was organized by the public association “Agents of Change” and reading was conducted by the author of the comic book Altyn Kapalova. Afterwards, participating students worked with the comic book artist, Cholpon Alamanova, to composed an alternative happy ending to the story. They created a comic strip collage using many different cuttings from magazines, beautiful paper and images of the heroines: Tynym, Zharkyn and Kalys.

Following the event, the book was distributed among the 800 parents and their children living in the municipalities where this project is being piloted.

Related News
09/08/2016
Stopping bride kidnapping in Kyrgyzstan
12/11/2021
Call for Proposals to support the establishment of a regional funding mechanism for the Central Asia women’s movement.
27/09/2019
Take five: “It’s time for the new generation of activists to dare and act!”
15/12/2016
From where I stand: Aiturgan Djoldoshbekova and Aigul Alybaeva
30/09/2016
My girl is not for sale: Escaping child marriage in Moldova
END_OF_DOCUMENT_TOKEN_TO_BE_REPLACED