In the words of Pip Gardner: “Young people need to have a seat at the table” 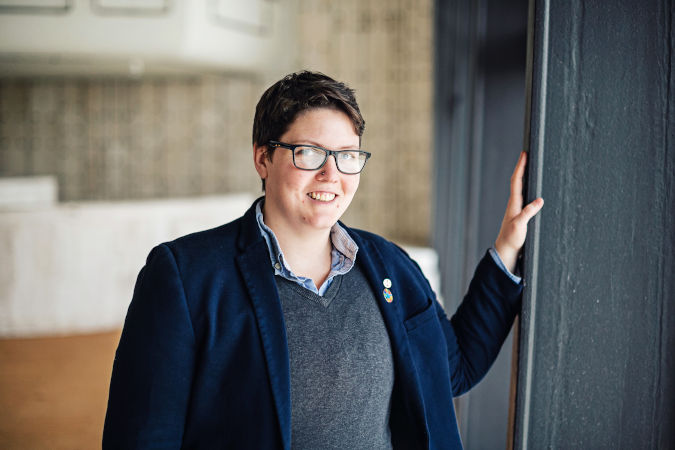 Pip Gardner is a women’s rights activist with a focus on sustainable development. They are currently the Project Coordinator and Communications Manager for Woodcraft Folk – a co-operative youth movement in the United Kingdom (UK). They are also a volunteer, working with girls, women and trans people on the promotion of sexual and reproductive health and rights, and the prevention of gender-based violence. Gardner is a member of the Beijing+25 Youth Task Force and attended the 25th year Regional Review Meeting of the Beijing Platform for Action for the UN Economic Commission for Europe (UNECE) Region.

“The opportunity to bring together civil society, governments and other stakeholders in one place at the same time helps us to learn from one another and to share best practice and reflect on the realities of citizen’s lives across the region. People often move in different spaces and so it’s important to bring together and give voice to those who experience and work directly with gender inequalities.

Right now, the pushback against the movement for gender equality is having profound effects on the lives of LGBTQI+ people, especially young LGBTQI+ people, who face additional barriers and discrimination because of their age. Increases in homophobia and transphobia are driven by gender discrimination, it’s the same forces and arguments that have been used to discriminate against all women. We need to come together and realize that we are fighting the same fight - for our human rights to be respected and defended regardless of gender or sexuality.

As we can see from the climate strikes movement, young people all over the world are demanding action on the climate emergency. It’s urgent. It will disproportionately affect women and girls and the most disadvantaged communities. For too long we’ve put off tackling those issues and now we need to take action imminently before it’s too late.

Gender-based violence is a critical issue across the Region. Challenging harmful cultural norms and ensuring gender equality in education is central to tackling some of the underpinning causes of gender-based violence. We also need to involve people of all genders in conversations and action around peace and security.

Ten years of austerity has increased gender inequalities in the UK. Narratives playing out in the media have sought to divide people and set groups against one another in a fight for limited resources. We need policymakers to see how gender equality will benefit society as a whole and chip away at so many other challenges people face in their everyday lives. That’s why investment into organizations working in this area and a gender mainstreaming approach in policymaking are both critical.

Young people are affected in different ways. They face many of the same, but also many different gender inequalities. So, we need to solve these problems by working inter-generationally and to do that, young people need to have a seat at the table and share their own experiences of the world. There should be nothing about us without us.

Demand a seat at the table and keep raising your voice. Don’t let anyone tell you that you’re too young or are not an expert in the issues that you face - you are! Join together with others, create solidarity in our shared activism, and let’s cooperate to achieve gender equality the world over!”

Related News
02/10/2020
Press release: 25 years after a landmark global agreement, the numbers still don’t add up for women
07/09/2020
Press Release: Women’s rights advocates from the Western Balkans and Turkey gather to discuss new pathways to gender equality and call for urgent action
16/12/2019
Pascale Baeriswyl: “Only through partnership can we bring real political commitment to gender equality”
12/12/2019
I am Generation Equality: Zere, feminist singer
11/12/2019
Ask an activist: How should women’s rights activists follow up with the Beijing+25 Regional Review Meeting?
END_OF_DOCUMENT_TOKEN_TO_BE_REPLACED