UN Women Executive Director Phumzile Mlambo-Ngcuka travelled to Bosnia and Herzegovina from 3-6 November to reaffirm UN Women’s commitment to support the country in its efforts to advance gender equality and the empowerment of women and girls. During the visit, Ms. Mlambo-Ngcuka met with officials, donors, women's groups, grantees of the UN Trust Fund to End Violence against Women, service providers, women survivors of conflict-related sexual violence, and other women facing multiple forms of discrimination. She also visited a shelter that supports women survivors of violence and their children with specialized services. 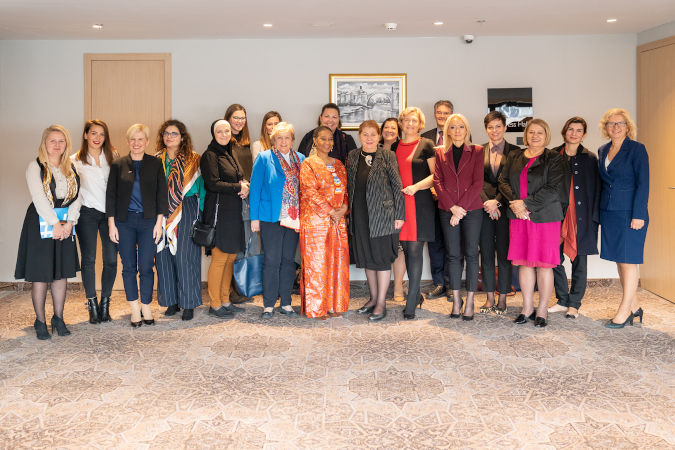 ED Phumzile Mlambo-Ngcuka met with female politicians from all over Bosnia and Herzegovina to discuss the challenges for women’s political participation. Photo: UN Women/Adnan Bubalo

“Everywhere in the world women politicians have to fight to get in and to stay there.”

On the final day of her visit, Executive Director Phumzile Mlambo-Ngcuka met with female politicians from all over Bosnia and Herzegovina to discuss the challenges for women’s political participation. The country is far from achieving equality in terms of political participation, despite laws that prescribe equal representation of women and men with at least 40 per cent representation of women in all government bodies and electoral lists. One of the politicians, Edita Velić, representing the political party DF - Democratic Front (Demokratska Fronta), emphasized that this is a conversation in which men should also be included: “We know our problems. We need to invite men to the discussion – especially men who are elected parliamentarians,” said Ms. Velić. Executive Director reiterated that lack of participation of women in political life is simply not an option and that young women need new role models, especially in political decision making. 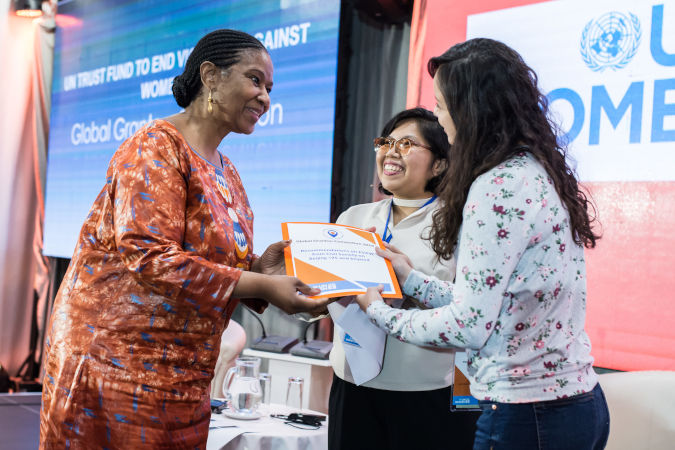 A set of recommendations were presented to the UN Women Executive Director by the two youngest grantees of the Convention. UN Trust Fund/Sulejman Omerbasic

The Global Grantee Convention of the UN Trust Fund to End Violence Against Women (UN Trust Fund) concluded with a set of consolidated recommendations that were presented to the UN Women Executive Director by the two youngest grantees of the Convention. The recommendations were a result of extensive work carried out by thematic working groups involving all grantees, partners and UN staff. They will feed into the global consultations on Beijing+25 next year, and beyond, and also inform the UN Trust Fund’s next strategy. Speaking after receiving the recommendations, Executive Director expressed hope that the Convention made it possible to form long-lasting relationships that will encourage further development of the global women’s movement. 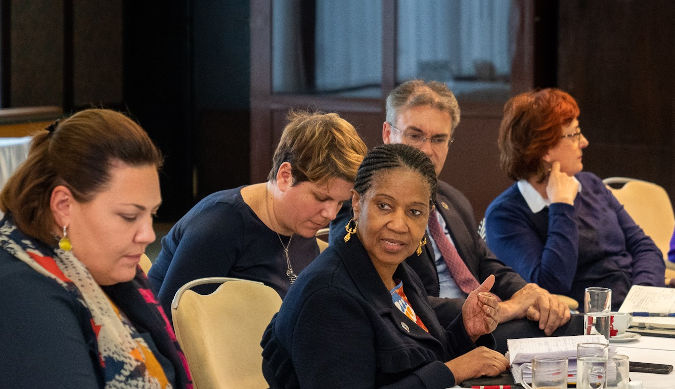 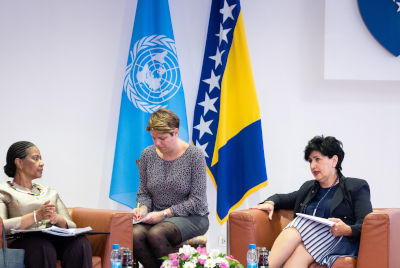 On day three, the Executive Director met with the Minister of Human Rights and Refugees, Ms. Semiha Borovac, one of the two women ministers out of 10 in the Council of Ministers, and representatives of the Agency of Gender Equality of Bosnia and Herzegovina. The importance of UN Women's support to the advancement of gender equality in Bosnia and Herzegovina was once more reiterated. Examples of progress that were mentioned included, the ratification of the Council of Europe Convention on preventing and combating violence against women and domestic violence (also known as the Istanbul Convention), the adoption of the third Gender Action Plan at state level, and the third Action Plan to implement UN Security Council resoution 1325 on Women, Peace and Security. One of the challenges that was highlighted at the meeting was lack of safe houses, with existing capacities seven times less than what the Istanbul Convention prescribes. 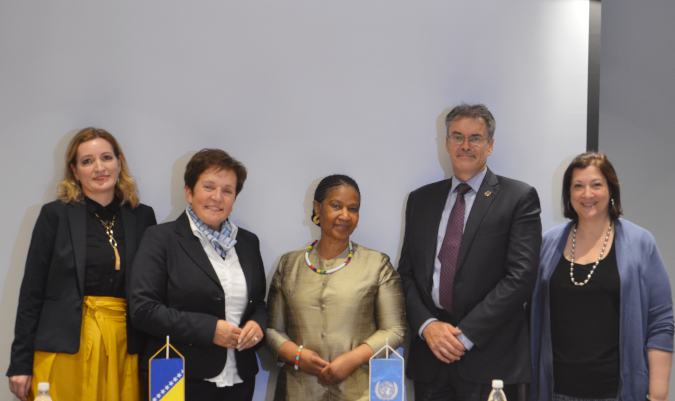 Later that day, Ms. Mlambo-Ngcuka met with Ms. Marina Pendeš, the Minister of Defense and the second woman minister in the Council of Ministers. They discussed the positive impact of training the armed and police forces in having a more gender-sensitive approach and increasing the number of women in uniform. They also mentioned the importance of prevention of violent extremism through education and discussed synergies in this area. 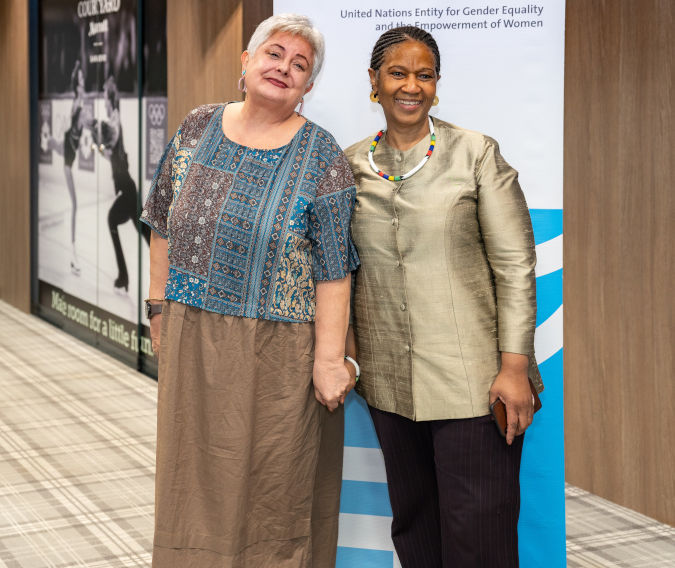 UN Women's chief also met with the Director of the Gender Center of Federation of Bosnia and Herzegovina (FBiH), Ms. Ana Vuković, and discussed the work of this entity level government body and its engagement in important gender equality issues. One of them is gender-responsive budgeting, which the Gender Center of FBiH made one of its priorities as a pioneer in the South East Europe region. Ms. Vuković emphasized that gender needs to be integrated in budgets and that gender equality should be mainstreamed in all state policies. She expressed her satisfaction that new generations are changing their views on traditional gender roles. 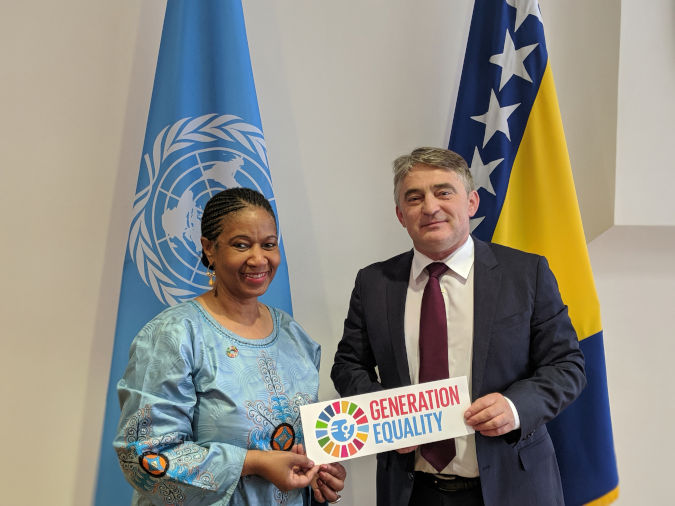 On her second day in Bosnia and Herzegovina, UN Women Executive Director held a meeting with the Chairman of the Presidency, Mr. Željko Komšić and the UN Resident Coordinator Ms. Sezin Sinanoglu. They discussed the need to ensure increased participation and leadership of women in politics in Bosnia and Herzegovina, and the importance of not only passing legislation to advance gender equality, which the country has done a lot in the past few years, but also to ensure its implementation. Mr. Komšić also recognized the need for progress in ending violence against women, in a country where half of the women and girls over 15 years of age have experienced some form of violence. 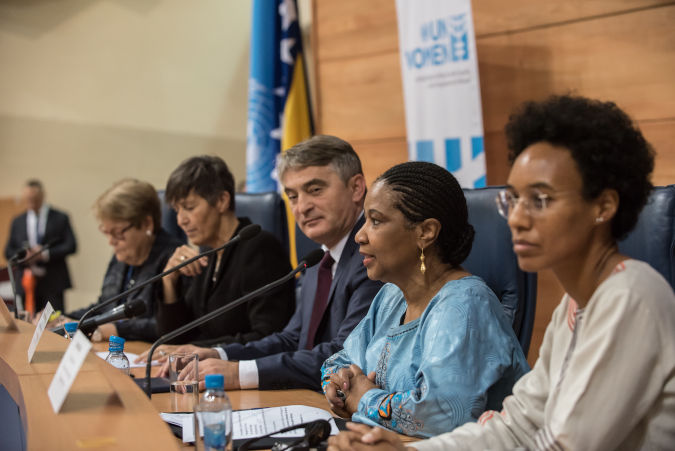 Later that day, Ms. Mlambo-Ngcuka and Mr. Komšić participated in the official opening of the UN Trust Fund to End Violence Against Women (UN Trust Fund) Global Grantee Convention at the Bosnia and Herzegovina Parliament, together with Ms. Charlotte Bunch, Founding Director and Senior Scholar at the Center for Women's Global Leadership at Rutgers University, Hakima Abbas, the co-Executive Director of AWID, and Aldijana Šišić, chief of the UN Trust Fund. “Living a life free from violence is a basic human right, it is not something to be allowed or permitted, but something to which women are entitled. Violence against women is not inevitable, is not normal, acceptable or excusable and everyone has a role in preventing it from happening,” said Ms. Šišić in her opening remarks.

“We know that violence against women will not be ended except by addressing it as part of the broader discrimination against women. I am encouraged that there are many more actors demanding an end to violence against women – From the “Me Too” movement to farm workers’ codes on sexual harassment. From “Ni Una Menos” massive demonstrations in Latin America to the “Girls not Brides” campaign among others,” added Ms. Bunch. 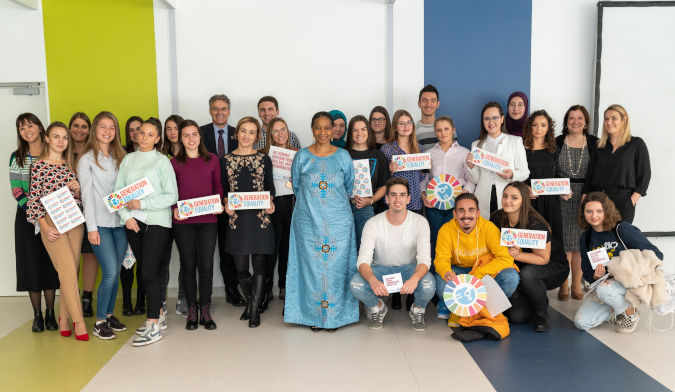 Executive Director @phumzileunwomen spoke with a group of determined youth who are involved with our work in Bosnia and Herzegovina 🇧🇦. She encouraged them to take on #GenerationEquality as a driving force to stay engaged in addressing the most pressing issues of our time. pic.twitter.com/kc5qSvUK9L

Following the opening ceremony, UN Women Executive Director launched the Generation Equality campaign in Bosnia and Herzegovina with a group of young people engaged in gender equality. They discussed about women’s and girls’ participation in working sectors where they are currently underrepresented, such as Science, Technology, Engineering and Math (STEM), as well as the specific challenges of girls from minority groups. Gender roles and the importance of changing mindsets were other topics of discussion.

Lejla Omerović, a member of IT Girls, a joint initiative of UNDP, UNICEF and UN Women to encourage young women to develop interest in the ICT and STEM areas, said: “I believe we are moving away from patriarchy, which is very intense in our region, and that we will have more gender equality by 2030. Girls are strong and brave and should have a chance to do what they want”. 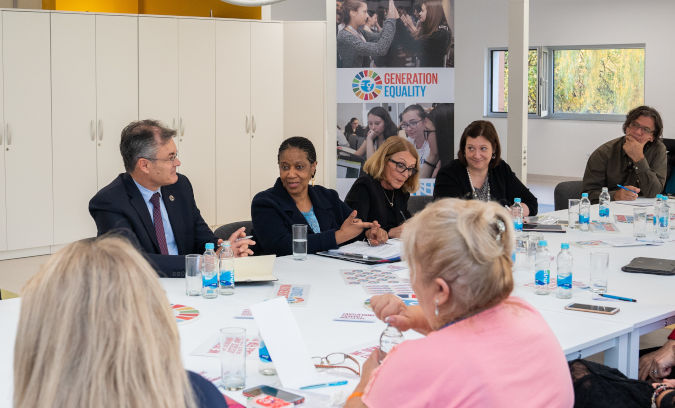 Ms. Mlambo-Ngcuka met with CSOs and discussed the challenges and opportunities they face in the context of the Beijing+25 commemoration. Photo: UN Women/Adnan Bubalo

Ms. Mlambo-Ngcuka later met with civil society representatives and discussed the challenges and opportunities they face in the context of the Beijing+25 commemoration, including the Generation Equality Forum in Mexico and Paris, in May and July, respectively. The pushback and resistance to advance on the gender equality agenda was highlighted by most participants. UN Women’s Executive Director reinforced the need for civil society to take center stage in next year’s commemorations. 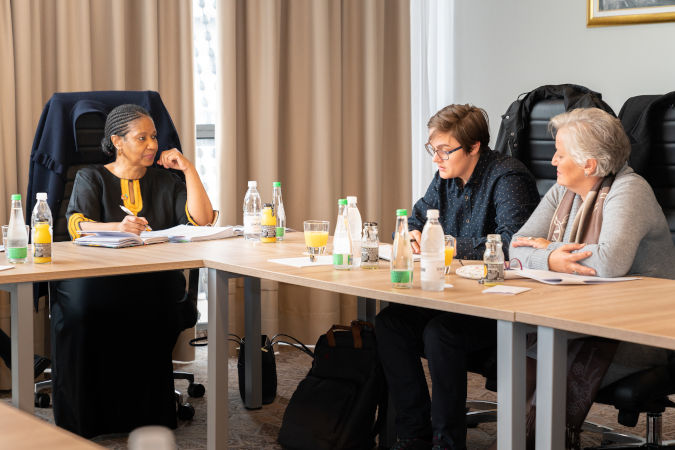 In my first visit to Bosnia and Herzegovina, I had the opportunity to meet with Ajna Jusić, President of the Association Forgotten Children of War. It’s an important reminder that we must end stigma and discrimination against children born out of wartime rape. pic.twitter.com/SoGZFmsjNT

UN Women Executive Director, Phumzile Mlambo-Ngcuka, began her first official visit to Bosnia and Herzegovina by holding a meeting with Ajna Jusić, President of the Forgotten Children of War Association. Ms. Jusić, born out of wartime rape herself, explained how this has had an impact on her life and what her organization strives for: “In Bosnia, children must have the first name of the father before their last name in their IDs, for many administrative procedures. So, I have an “X” in my ID.” She added, “We are not children of hate. We are normal people and we don't need to be invisible. We don't want to be discriminated against". Also present at the meeting was Amra Delić, psychiatrist and researcher specialized in the long-term psychological consequences of wartime rape on women. “Many of the raped women we have worked with imposed on themselves a sort of “protective taboo” - that is, they kept silent so their children would not be discriminated against for being born out of rape," explained Ms. Delić. 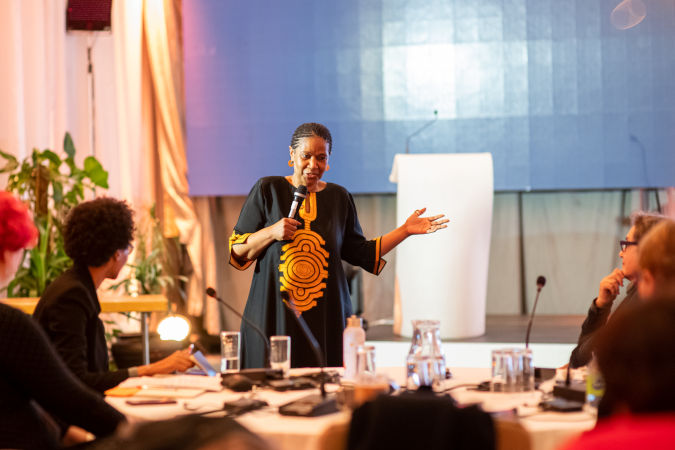 The Executive Director gave opening remarks at the “Beiijng Unfettered” workshop led by AWID, an international, feminist, membership organisation committed to achieving gender equality. Gathering all the current grantees of the UN Trust Fund to End Violence against Women, the event provided an opportunity to imagine a world free from violence against women and girls, and brainstorm solutions on how to get there, ahead of the 25th anniversary of the Beijing Declaration and Platform for Action in 2020 (Beijing+25). “We are at a moment of history where business as usual does not work. Generation Equality, our campaign for the Beijing+25 commemoration is going to be the space for civil society to do what we did in Beijing in 1995 and more to advance the gender equality agenda,” said Ms. Mlambo-Ngcuka. 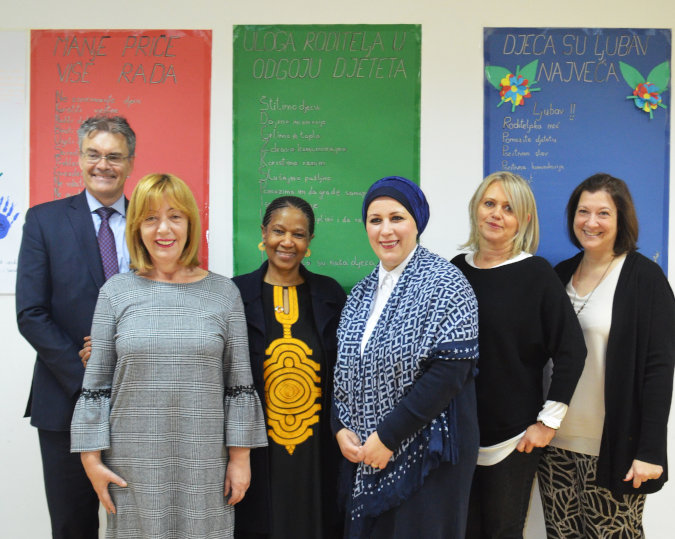 Later in the day the Executive Director visited a safe house, which provides support to survivors of violence and their children with access to healthcare, legal and psychosocial services. The center is run by the Foundation for Local Democracy, which UN Women supports under a project that advocates for legislative revisions that would enable systematic and sustainable specialist support services such as shelters, help line, and free legal aid for survivors of domestic violence.

Related News
03/12/2021
Press Release: Regional actors channel creative approaches to shape policy advocacy on ending violence against women in the Western Balkans and Turkey
10/09/2021
Bosnia and Herzegovina takes a strong step forward to protect women survivors of violence
01/04/2021
Police officers in Bosnia and Herzegovina spark a movement to fight violence against women
08/03/2021
Women leaders in the Western Balkans and Turkey confront violence against women amid the pandemic
09/07/2020
Violence increased during the coronavirus pandemic, women and girls need psychological support
END_OF_DOCUMENT_TOKEN_TO_BE_REPLACED