The media’s portrayal of gender gets students’ attention in Turkey

Eye opening, inspiring and confronting is how some university students describe their chance to explore gender portrayal in the media during a recent UN Women organized training in Turkey. The training, which involved nearly 100 students, is the first of several planned for 2020 across the country. 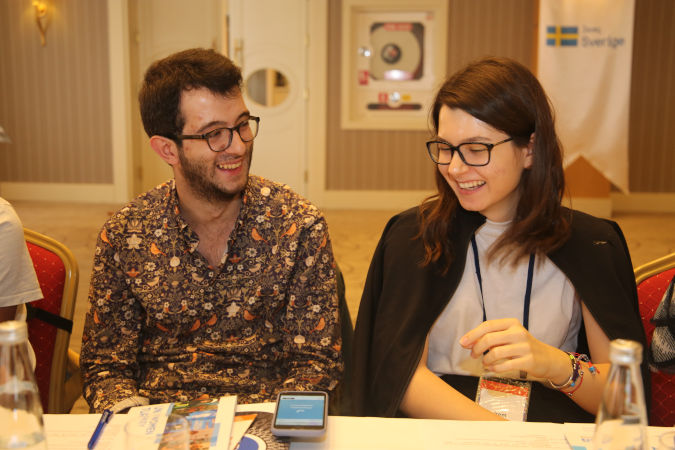 University students are challenging each other about gender equality on an online game-based learning platform. Photo: UN Women

Students from Osmangazi and Anadolu Universities came together in Eskişehir in October to discuss gender equality, the portrayal and representation of women and the language used in media, with a focus on the coverage of women politicians.

In her opening remarks, Zeliha Ünaldı, Programme Manager at UN Women in Turkey, set the scene with information about gender and the 2030 Agenda for Sustainable Development. “Women are barely represented in the political arena, in the economy, in management positions. They are barely represented in the media. As media professionals of the future, you have an important responsibility to increase this representation. I believe this workshop will guide you and open your horizons,” she said.

Professor Nezih Orhon, the workshop moderator, made presentations on the portrayal of child, early and forced marriages, refugee women, violence against women, women’s leadership and political participation in the media.

The students were asked to consider: ‘Does news have gender?’ as they discussed the sexist language often used in sports, music, politics, news and in the representation of women politicians in the media. The workshop aimed to raise participants’ awareness about gender responsive journalism. They also discussed the reproduction of gender stereotypes in the media as a key barrier standing in the way of gender equality and women’s rights.

“We learned new concepts and expanded our perspective. Our awareness about gender-sensitive media has increased. We have seen the power and role of the media in achieving gender equality,” said Serap Elmas Yıldırım, one of the workshop participants.

Another participant, Derya Tez, said: “I realized, before attending this workshop, how many small details I was not aware of about gender inequality, and that these perceptions imposed on society settled into my mind. I try to enlighten the people around me in line with the information that I have learned.”

Zeynep Ayna, who also participated, felt the workshop was inspiring: “I have to admit that the workshop opened up new areas where I can direct my knowledge on gender equality,” she said.

The workshop was organized as part of the Gender Equality in Political Leadership and Participation in Turkey project. This project is funded by the Swedish International Development Cooperation Agency. Further workshops are planned for 2020 for students from different universities in different cities.