Partners discuss findings of the monitoring report of the Action Plan on the implementation of UN Security Council Resolution 1325 and the way ahead for the Women, Peace and Security agenda in Albania. 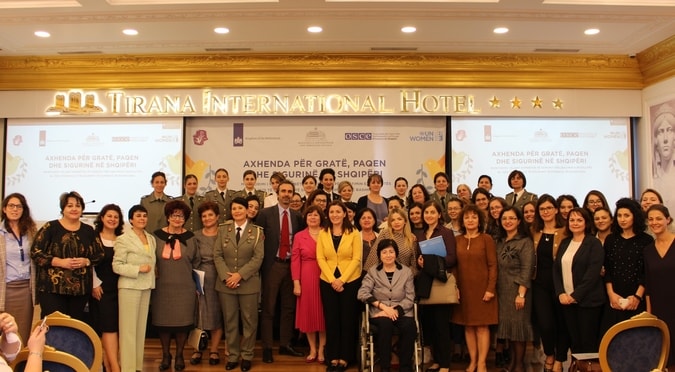 Tirana, 31 October 2019 - The month of September marked a year since the successful adoption of Albania’s first National Action Plan (NAP) for the implementation of the UN Security Council resolution (UNSCR) 1325 on Women, Peace and Security. The draft monitoring report was presented in Tirana in the presence of government partners, civil society, parliamentarians, international partners etc.

Michele Ribotta, UN Women Representative to Albania, stated that the country had achieved significant results, albeit the continuous challenges faced by women regarding their rights and exclusion. He underscored the reality in which women are still facing, noticeable “structural barriers that keep men in positions where decisions count”.

“Even though the monitoring report shows that 63 per cent of the plan has been achieved, there are still actions that need to be taken to increase our commitment in the Women, Peace and Security agenda”, said Bardhylka Kospiri, Deputy Minister of Health and Social Protection.

Given the findings of the report,  the first year of implementation of  Resolution 1325 in Albania led to an increase in women’s participation in decision-making positions:  A woman heads the Parliamentary Security Commission, which  now has five women who are members and  the Parliament is represented by a woman in NATO and one in the UN Security Council.

Following the launch of the Action Plan, the number of women officers in the army has increased by 8% and noncommissioned officers by 10.7%. Also, the curricula of the Military Academy, Police College and the Faculty of Crime Investigation have been reviewed, including the topics and elements of gender mainstreaming. 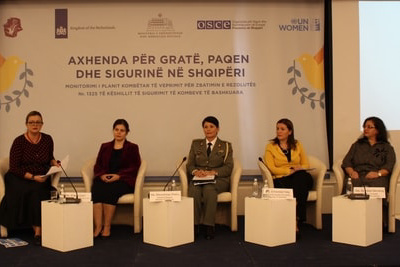 Several senior representatives from different institutions actively participated in the discussion on the First Monitoring Report of the Action Plan. Eralda Cani, an expert from the University of Tirana’s Faculty of Law and curator of the 1325 NAP implementation report, stated that “coalition is the secret of success” and highlighted the significance of cross-institutional cooperation in the implementation of the NAP.

Ms. Ermonela Felaj, Member of the Albanian Parliament and Chair of the Security Commission underscored the importance of education, and how inter-agency and intersectoral relationships are integral for the improvement of the agenda in the future

The event also aimed at celebrating the successful end of the project “Resolution 1325 – Women rights from concept to reality” of the Albanian civil society organization, Association for Women with Social Problems (AWSP). This organization has since 2016, implemented this project as a grantee of the UN Women Fund for Gender Equality (FGE).

Commenting on the monitoring report, the Executive Director, Ms. Bajana Ceveli, observed that it was so far, the pinnacle of the Coalition “Women, Peace and Security in Albania”.

The Coalition is the result of a participatory process facilitated by AWSP as part of FGE’s upscaling and social innovation initiatives. It comprises 32 local CSOs, which share a common goal: to contribute to gender-inclusive peace and security processes in the country. In achieving this goal, they serve as expert advisors, advocates, and watchdogs for the implementation of the NAP. The results of the Coalition’s work so far range from greater public awareness on the circulation of illegal firearms to significant input and coordination of the development of the NAP monitoring report.

Catherine Wolf, FGE Portfolio Manager for Europe, Central Asia and Africa, stated: “The success of the coalition lies in harnessing the diversity of priorities and skills of its members. It also shows that FGE’s approach of building on strong partnerships with women-led CSOs for transformative change works. They have the capacity to link the local demands with national efforts.”

UN Women organized the activity in collaboration with the Ministry of Health and Social Protection, the Association Gender Peace and Security, and the OSCE Presence in Albania.