Syrian refugee women from Gaziantep shared their experiences, insights and recommendations as part of the preparation for the first Global Refugee Forum. 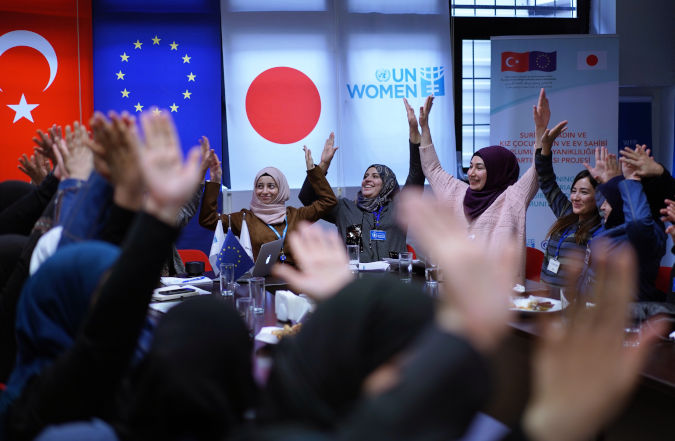 Syrian women who live in Gaziantep, Turkey, under temporary protection status attended, via videoconference, the preparatory event for the first Global Refugee Forum. Organized by UN Women and UNHCR on 28 October, the prepatory event provided a platform for the women to contribute their experience, insights and recommendations for empowering women in crisis in the lead-up to the Global Refugee Forum, which was held in Geneva on 17 and 18 December.

The women who participated were from the Syrian Women Future Committee. This was established by Syrian women in Gaziantep with the aim of supporting each other while building new lives in a new country. Before coming to Turkey, the women were doctors, pharmacists, lawyers, nurses and housewives, who all suddenly lost everything, in some cases even their families. During the videoconference, the women shared their stories of fleeing the war and building new lives in Turkey and how they empower each other and their community. One of the Committee members, Nur Omar explained that they were in fact lucky as they were given the chance to literally live after all the pain of the war. “We feel lucky to be attending important events after we were living in misery. Therefore, we will and want to stay active, influence other women in our society and when we eventually go back home,” Nur Omar told the Prepatory Event attendees. “We continue believing that ‘if a blow does not bring you down, it will strengthen you’. That is why we came together”, she said.

The Committee helps other Syrians in Gaziantep 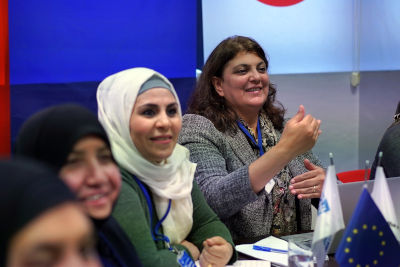 The Committee is managed by 50 women in a democratic and equal way. It is supported by the SADA Women’s Empowerment and Solidarity Center, which is financed by the European Union and Governments of Japan and Iceland, managed by UN Women in partnership with Gaziantep Metropolitan Municipality, Association for Solidarity with Asylum Seekers and Migrants and International Labor Organization. The SADA Center supported the Committee in raising their awareness and strengthening their skills by providing them with training including in language, health, capacity building and vocational skills.

Until now, the committee has helped many Syrian women and children by conducting house visits, raising awareness, solving issues including domestic violence, child abuse and early marriages with the support of the local authorities.

At the videoconference the women shared their suggestion to the Global Refugee Forum. The women said that to empower women in need, there should be more centers like the SADA Center. A special focus should be given to vocational training, which can ensure women’s access to the market as well as more leadership and capacity building training to help women once they return home and rebuild their lives.