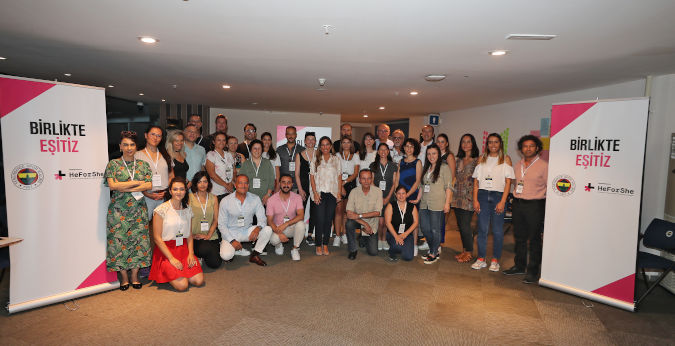 One of the oldest and most popular sports clubs in Turkey, with a large fan base of 25 million around the world, Fenerbahce Sports Club, aims to set an example globally by becoming gender-sensitive and inclusive sports club, thanks to UN Women`s HeForShe collaboration. Twenty-four Fenerbahce Sports Club staff are now trainers in gender equality and women’s rights after successfully completing a three-day trainer-of-trainers session, entitled: `Gender Equality Seminars’ on 31 July 2019.

With their new skills, the trainers are planning a series of gender awareness trainings for Fenerbahçe personnel, athletes and technical teams. This is part of the work the Club is doing to become a more inclusive organization, with no gender barriers, in collaboration with the UN Women’s global HeForShe campaign.

“Sport is an important enabler for development and women’s empowerment, and it can be a force to tear down gender barriers and discrimination. We believe that Fenerbahçe Sports Club will be a global model for inclusive and gender-sensitive sports clubs and inspire others,” said Sinem Aydın, HeForShe Coordinator, UN Women Turkey.

In 2018, the UN Women Turkey office started collaborating and cooperating with partners to use sport as a tool for achieving gender equality. Fenerbahçe Sports Club joined forces with HeForShe, with the support of Tüpraş, one of the companies of Koc Holding, an Impact Champion of HeForShe to advance gender equality and women’s empowerment in sport across the country. 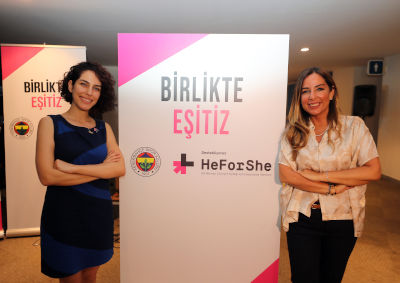 “We are playing a very important role for women and girls with our mission of being a pioneering and inclusive sports club. One of the most important goal we’d like to achieve with this project is to establish an egalitarian culture and trigger the mental transformation in the male-dominated sports world. And, our internal trainers will help us to realize this transformation through the seminars they will give to our staff,” said Simla Türker Bayazıt, Board Member of Fenerbahçe Sports Club.

The tailor-made gender equality trainings were provided by the Mother Child Education Foundation (ACEV). “One of the best ways to start transformation in an institution is to work with staff. We are very excited to work with a sports club,” said Hilal Baykara, Gender Manager from ACEV.

Emirhan Erdoğan, Foreign news editor at Fenerbahçe TV, and a participant in the training, said that: “as a Fenerbahçe TV editor, I will pay attention to using gender-sensitive language while editing news and overseeing news in terms of language and allocated time for both women and men.”

Another participant of the training of trainers for gender equality, İnci Peközer, mentioned that as the only female reporter working at Fenerbahçe TV, she was really happy to take part in this training. “After the training, I was able to recognize the gender stereotypes we are exposed to, and even how many gender blind actions I have been doing,” she said. 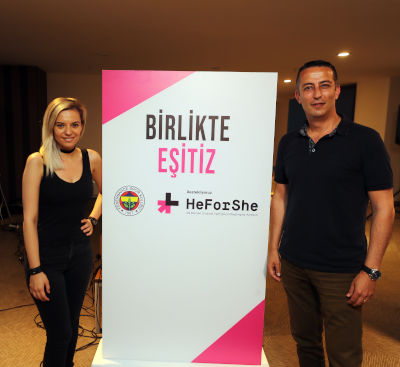 “I was surprised when I learned that only 30 percent of athletes in Turkey are women. I am willing to work for achieving gender equality in sports,” said Celal Hallaç, distributor and wholesale coordinator, Fenerium, and participant in the training.

As a result of this collaboration, Fenerbahçe aims to set an example globally by pioneering a number of initiatives in the sports community through the ‘Equal Together’ movement.

Related News
12/11/2020
A premiere in Moldova – eight Fathers’ Clubs to be established in Straseni and Falesti, with the assistance of the European Union
30/08/2020
9 ways men can become allies for equal rights
08/05/2020
HeForShe Turkey urges men to share responsibilities equally at home
17/03/2020
On International Women’s Day, Fenerbahçe Sports Club urges women’s empowerment in sports
28/11/2019
First open-air lighting installation exhibition opened in Ankara to say no to violence against women
END_OF_DOCUMENT_TOKEN_TO_BE_REPLACED