From where I stand: “A whole new life began and now I have a dream”

Hatice Muhammet is a survivor of domestic violence and a refugee from Syria. She is one of more than 5,000 refugees and Turkish women registered at the SADA Women Empowerment and Solidarity Centre, which offers livelihood and psycho-social support and vocational training in Gaziantep in southeastern Turkey near the border with Syria. 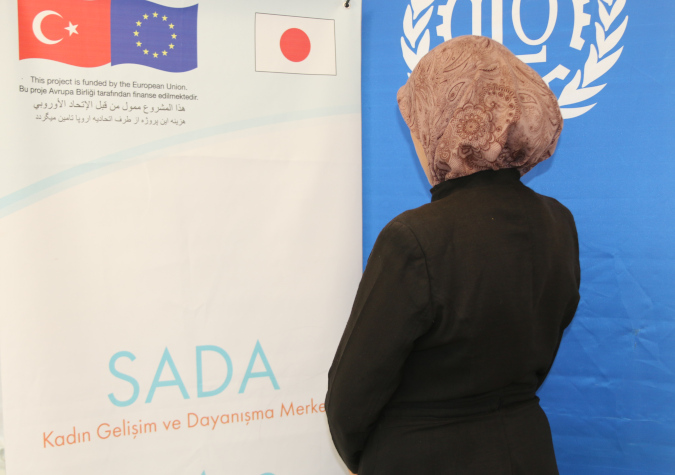 Because of my father’s debt, I was engaged at 15 and married at 17. I did not want a child. I wanted to study and become a doctor. The marriage deprived me of my life and hope. I experienced constant violence and was forced to get pregnant and give birth to seven children.

I used to work as a tailor in the Syrian countryside, making women’s head scarves but my husband became jealous because I was working outside. At the same time, there was less demand for the scarves, and I lost my job.

As the bombing escalated, we fled to Gaziantep in southeastern Turkey. There my husband became more violent and he unofficially married another Syrian woman. He wanted me to give birth to another child and named her after his second wife. Because I had to take care of the baby, I couldn’t work. My husband was unemployed. Three of my children aged 14, 12 and 9 would earn cash for our family.

I almost gave up my hope, but my life changed when I walked through the door at the SADA Women-only Centre. SADA staff told me I was not alone, and that things would be ok. They helped me to learn my rights to protect myself and encouraged me to learn new skills. I began vocational training at the SADA Centre, including computer and tailoring workshops.

A whole new life began and now I have a dream. I want to start a big tailoring business of my own. The Centre has been helping me achieve this goal.

Now some of my children are back in school. I never want my daughters to experience what I have gone through. I will not let them marry early or experience violence. I want them to study, work and walk their own life.”

* Name has been changed to protect the identity of the individual.

The SADA Center was set up by UN Women in 2017 with financial support from the European Union Regional Trust Fund in Response to the Syrian Crisis, the ' Madad Fund' , and the Government of Japan. It is operated in partnership with the Gaziantep Metropolitan Municipality, International Labour Organization and the Association for Solidarity with Asylum Seekers and Migrants (SGDD-ASAM). Hatice Muhammet’s story relates to Sustainable Development Goal 5 on achieving gender equality and the empowerment of all women and girls. It also relates to SDG 8 on promoting decent work and productive employment for all, as well as SDG 16 on promoting peaceful and inclusive societies.

Related News
09/12/2022
Türkiye says NO to intimate partner violence with #SheSaidNo campaign
21/04/2022
In the Words of Ayşegül Küçükafacan: “Thanks to the small grant by UN Women, I am stronger in combatting violence and abuse”
09/12/2021
In the words of Rahime Hasan: “We should not overlook the place of men in the fight against violence”
19/06/2019
Compelled and empowered, Syrian refugees changing traditional gender norms
01/02/2023
Interview: “Non-governmental organizations remain the vital force that drives all action towards ending violence against women”
END_OF_DOCUMENT_TOKEN_TO_BE_REPLACED