Natalia Patina was 9 years old when she sat at her grandmother’s sewing machine for the first time. She remembers that she got interested in sewing right from that moment. 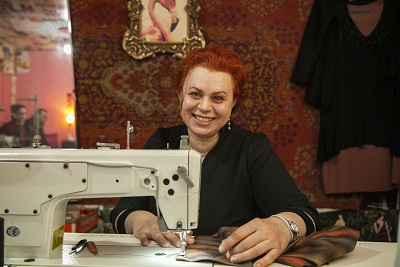 As the years went by, she began her career as a teacher, then as a financial specialist. She had respective jobs in both fields, but she never stopped sewing. Little by little, this hobby became a source of additional income for her.

Patina’s life changed completely when she was 40 years old. “I was living on the outskirts of Donetsk City when combat operations started in Ukraine,” she remembers. “Due to safety reasons, I had to leave my house and find shelter in Georgia with my husband and my underage daughter Nila.”

Her favorite hobby helped her when she came to Georgia. Soon after acquiring refugee status, she started working as an assistant at one of the local ateliers. She has worked at several tailor’s shops since then, but deep down she had always dreamed of opening a shop of her own. This is when she received a call from the Office of the United Nations High Commissioner for Refugees (UNHCR), offering her to attend the training course “How to Start up a Business” at the Academy of the Ministry of Finance.

The training was a part of the joint project implemented by UN Women and UNHCR - “Support to Refugee Women’s Integration in Georgia”. It aimed at empowering the refugee women residing in Georgia, protecting them from gender-based violence and enhancing their economic opportunities.

According to the official statistics of the Government of Georgia, of the 2,091 refugees residing in the country, 46 per cent are women. Employment is one of the main challenges with refugee integration. This is why the project has placed its emphasis on opportunities for developing small businesses. More than 50 refugee women attended the training, including Patina. Patina remembers that she went to the first meeting because of interest, but then she was attracted by the atmosphere, course content and practical skills-sharing. She has also learned about a new, important opportunity available to her: the course graduates were given the chance to participate in the call for grant proposals announced by UN Women and the Georgian Farmers’ Association, which aimed at financing the best business ideas.