In Kosovo, the prevalence of domestic violence remains unknown. The new centralized database will throw a spotlight on the real extent of the issue, keeping in mind the underreporting of cases in general. 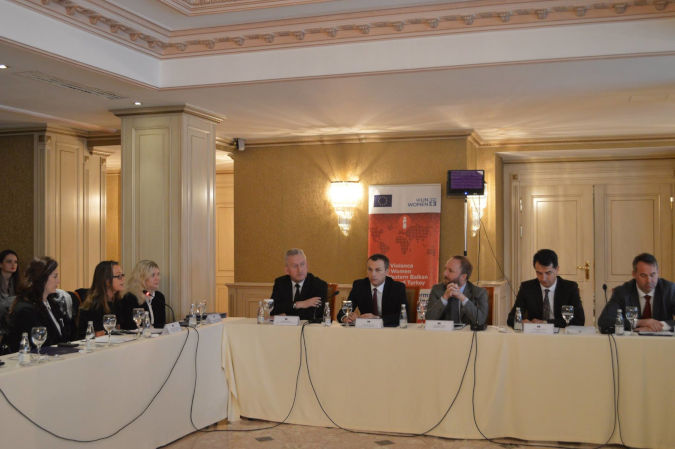 On 14 March 2019, a key milestone was achieved for Kosovo[1] when government institutions dealing with violence against women and girls signed a memorandum of understanding on an integrated and unified database for cases of domestic violence. This database will enable the monitoring and prosecution of domestic violence cases in Kosovo, and ensure accountability, by obliging relevant institutions to feed the database with the necessary information from central and local levels.

During an official ceremony with the participation of many high-level local and international representatives, the Minister of Justice, Minister of Labor and Social Welfare, Head of the Kosovo Judicial Council, Head of the Kosovo Prosecutorial Council, and the Director of the Kosovo Police signed a memorandum of understanding for the establishment of the integrated database. The creation of the database is supported by the UN Women Regional Programme on ending violence against women in the Western Balkans and Turkey, “Implementing Norms, Changing Minds", funded by the European Union.

Recently, Kosovo has made progress on its legal framework addressing domestic violence. The criminal code has been revised, resulting in the inclusion and definition of domestic violence as a separate criminal offense, and accurately defining all acts of domestic violence, aligned with the requirements of the Council of Europe Convention on preventing and combating violence against women and domestic violence, known as the Istanbul Convention. Allowing for a centralized collection of domestic violence cases under this database is seen as one more breakthrough in this area, especially considering the increased reporting of cases. In 2018, there was an increase of 300 cases compared to the previous year. The database will be led and supervised by the Deputy Minister of Justice and National Coordinator for Protection from Domestic Violence, Naim Qelaj.

"I congratulate Kosovo on the integrated database, which will help track all progress towards fighting domestic violence,” said Ulrika Richardson, United Nations Development Coordinator and ensured continuous “support by the UN Kosovo team for all central and local level institutions on addressing and preventing gender-based violence.” Richardson pointed out that "justice should not be blind to gender inequalities!"

While praising the work of UN Women and thanking the office for its continuous cooperation and support in the area of ending violence against women and girls the Minister of Justice, Abelard Tahiri, stated that “the database will not only gather data on domestic violence cases, but will also serve for cause and effect analysis, crucial for building of a more effective response.”.

"The training of responsible institutions continues at the central and municipal levels and so far, more than 120 representatives from relevant institutions have been trained on how to insert and manage data," said Naim Qelaj, National Coordinator for Protection from Domestic Violence.

UN Women continues to strengthen the work of all actors involved in combating violence against women and girls, including the municipal domestic violence coordination mechanisms throughout Kosovo, the police, and the judiciary. “This database marks a key milestone for Kosovo and supports its work in eliminating gender-based violence and domestic violence. UN Women remains committed to support institutions and civil society organizations in working together towards the prevention and elimination of violence against women and girls, but also towards the reintegration of survivors” said Vlora Nushi, Head of UN Women in Kosovo.

Related News
27/09/2022
Documentary and Short Film Festival Celebrates the Power of Women in Kosovo
13/04/2022
In the words of Iliriana Jaka Gashi: “Bringing public and private institutions together to work on the economic reintegration of survivors of violence is indispensable”
25/11/2021
Believe Survivors. Act Now. Sara Gashi’s Story, Kosovo
20/04/2021
Take Five: “It is imperative that all laws are harmonized with the obligations in the Istanbul Convention”
12/04/2021
Call for Proposals for civil society organizations in Kosovo to submit project proposals on strengthening capacities of shelters to support survivors of violence, improving capacities of professional staff engaged in service provision, and development of
END_OF_DOCUMENT_TOKEN_TO_BE_REPLACED