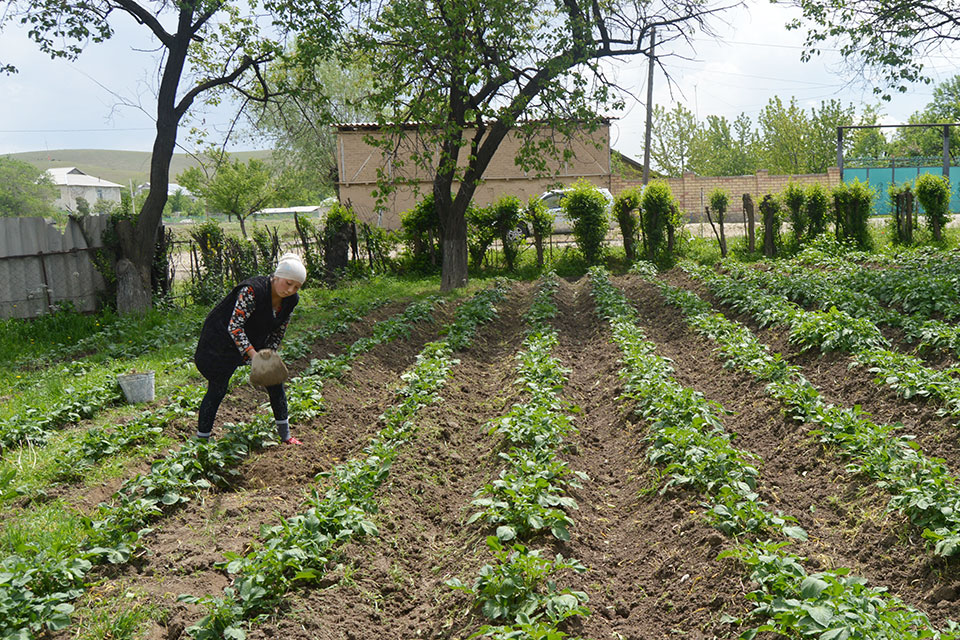 Shakhodat Teshebayeva from Khalmion, a village in southern Kyrgyzstan bordering Uzbekistan, is 50 years old and the sole breadwinner of her family. Her income comes from farming, working for 8-10 long hours in the fields every day. She doesn’t shy away from the hard work, but lately, the hard has become impossible, because of the growing water crisis.

The crisis, which is worse in spring and summer, stems from a combination of factors. As the mountains get less snow because of climate change, the glacier-fed rivers don’t have enough water. The dwindling water source is the same for Uzbekistan and Kyrgyzstan, and as Uzbek farmers across the border start irrigating their fields in spring, the Kyrgyz farmers living down river experience water shortage.

The lack of access to irrigation water in this area, where agriculture is the mainstay, has hard consequences. Women and girls often bear the brunt of the problem, as water collection is considered a women’s chore. As the water source dwindles, they have to walk further and longer to fetch water, even after dark.

“Lack of access to water harms my agricultural production, food security and business opportunities in the local bazaar,” explains Teshebayeva. “Fetching water during the night is a daunting task as it puts us women at risk of violence and carrying it over long distances can have lasting health effects.”

Two years back, Teshebayeva decided to take matters into her own hands and mobilized a women’s self-help group to advocate for equal access to water resources in her community. As a first step, she started attending the village Water Users Association meetings, which were dominated by men and decisions about water access were taken without women. 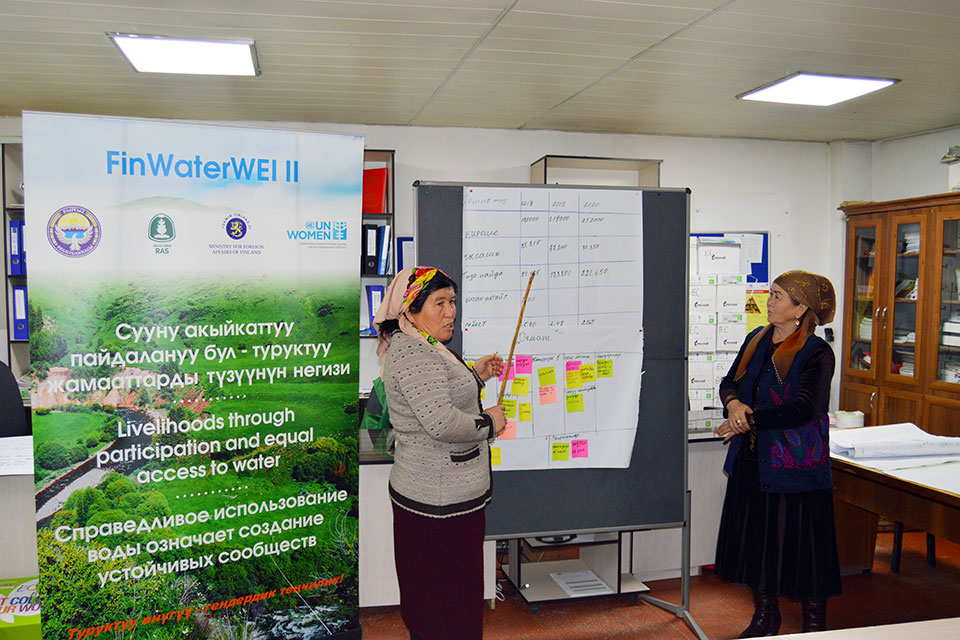 “When I started to participate at the meetings, many said behind my back that I did it as I had nothing better to do,” said Teshebayeva. But all the talk didn’t dissuade her. Teshebayeva continued to voice women’s challenges at the meetings and offered solutions. She became the first woman in the history of her village to advocate for women’s participation in water management.

Through a livelihoods project funded by the Government of Finland, UN Women has facilitated the establishment of 14 women’s self-help groups in southern Kyrgyzstan that now have 170 members. The project provided skills training to boost women’s income and connected them with Water User Associations and local-self-governments so that women could have a voice in water management decisions that impacted their daily lives, livelihoods and safety.

“Prior to the project launch the situation was difficult for women. Women were afraid to irrigate the fields at night,” continues Teshebayeva. “We used to collect water strictly in turns as per the schedule agreed at public gatherings where women had no say.” The result was a prevailing sense of insecurity among women and low harvest as they often missed turns due to safety concerns.

Teshebayeva has been a trailblazer for other women in her village as she managed to negotiate water supply during the day-time and flexible schedules for irrigation for women farmers, especially single heads of households. She also encouraged more women to participate at the village meetings to advocate for women’s equal and safe access to irrigation water.

As a result of the work of partners and UN Women, the number of women participating at the decision-making level in Water User Associations has increased from 13 to 124 women in the 14 self-help groups between 2016 and 2018. 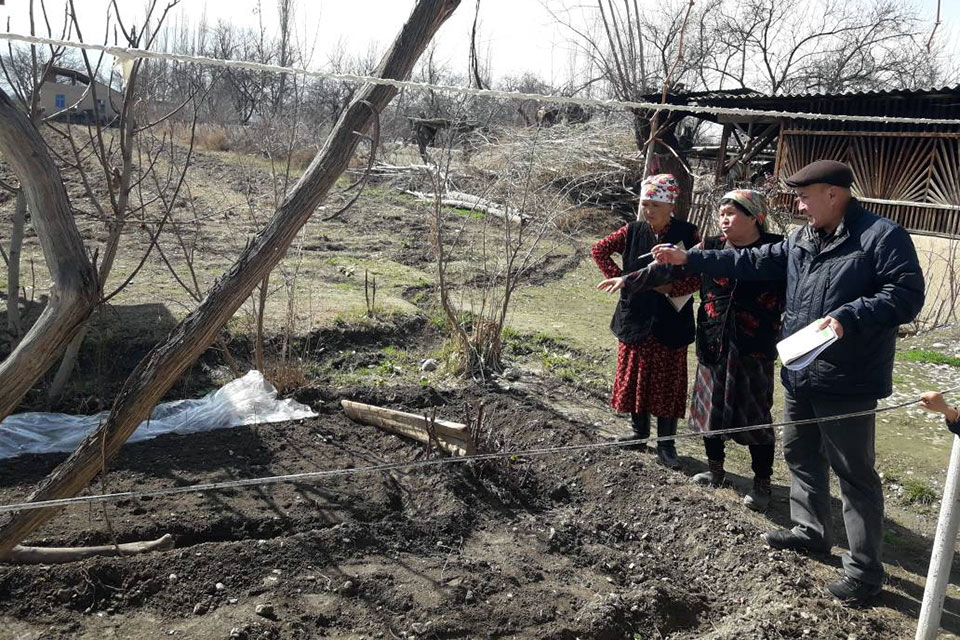 These numbers matter. “The project ensured that women’s voices are heard and taken into account in water resources management by empowering them to be active participants in addressing inequalities related to access to and control over water,” says Anara Aitkurmanova, UN Women Project Coordinator.

About a hundred kilometers (62 miles) north-east of Khalmion, the village of Naiman used to have similar challenges. Its main water source had been contaminated with mercury for years and access to safe drinking water and cultivable land were key issues for the community. The young and abled were migrating out of the village, leaving an older and dwindling population behind. Through women’s self-help groups and peer educators among young girls and boys, the UN Women project facilitated women’s participation in water management, with great results.

Roza Shamaeva, who worked closely with the project, is the first female head of the village and a force to reckon with. She says, “through the UN Women-led project, I informed people about fair and equitable distribution of water resources and how to effectively use land and water for sustainable agriculture. I hope that the positive changes we’ve achieved will prevent young people from migrating so that we can work together for the development of our village.”

Shamaeva was re-elected as the head of Naiman rural district for the second time in 2018. She has brought not only water, but also electricity and better street lighting to Naiman, restored irrigation infrastructure and convinced the local population about the need for efficient water management and timely payment of their water bills. Because of her advocacy, farmers in her community have started applying modern and sustainable agricultural methods such as drip irrigation and composting. As a result, the harvests are better and have less impact on the environment.

Related News
06/06/2022
Press release: Women Water Forum in Tajikistan brought together over 170 participants from 40 countries
28/02/2018
Youth in rural Kyrgyzstan champion gender equality and access to clean water
30/11/2022
3rd Food Systems Talk: “Rural women and girls in sustainable, resilient and inclusive food systems”
14/10/2022
Interview: “Rural women must be aware of their value and fight every day, in various ways, in this male-dominated world”
13/10/2022
In the words of Ramiye Şalja: “Together we are much better and more powerful.”
END_OF_DOCUMENT_TOKEN_TO_BE_REPLACED