87 women from different political parties and civil society organizations in Adana and Gaziantep, made a joint statement calling for more gender equality in politics at workshops organized by UN Women. 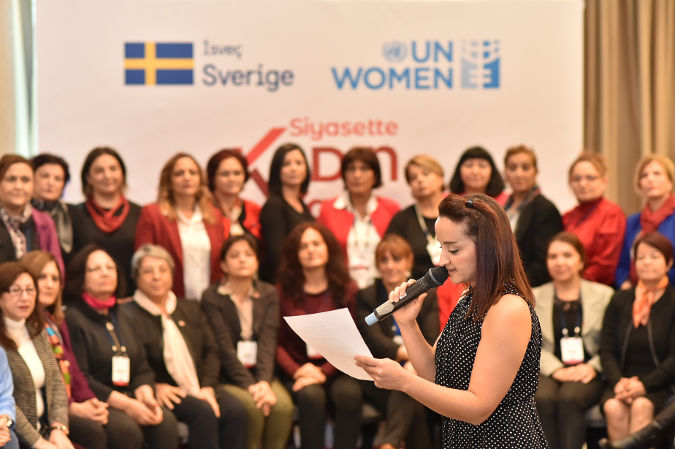 Ahead of the local elections that will take place in March 2019 in Turkey, UN Women is organizing “Local Politics Workshops” that aim to empower women candidates in four different cities of Turkey. 87 women from five political parties who are running or planning to run in the local elections as well as civil society organizations participated at the workshops in Adana and Gaziantep, between 14 and 16 December, and 18 and 20 December respectively. Women from Adana, Gaziantep, Adıyaman, Mardin, Hatay and Kahramanmaraş attended the workshops.

The women specifically called political parties to ensure more space for women in the elections and support women’s participation at all levels of public policy-making without discrimination.

The three-day workshop aimed to improve the participants’ knowledge and skills as candidates. The participants were involved in sub workshops on gender awareness, transformative leadership, running as a woman, political parties, communication and social media, public speaking, violence against women in politics, funding and campaign management. 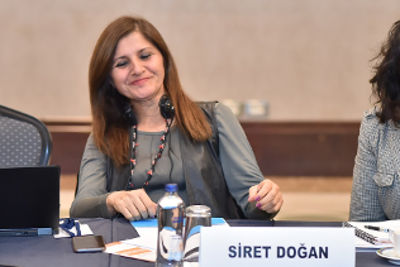 Siret Doğan, one of the participants, plans to run for membership of the council in Şahinbey province, Gaziantep. Photo: UN Women/Ender Baykus

“I am happy that I run for candidacy. This training empowered me. I am now more determined as a politician,” said Siret Doğan, one of the participants who said that she was hesitant to run for candidacy before the workshop. Siret Doğan who participated the workshop from Gaziantep, located southeastern of Turkey, plans to run for membership of the council in Şahinbey province, Gaziantep. She has been an active member of the women branch of her party.

“I have now more knowledge about women’s political participation and feel that I gained self-confidence. I wish that men at policy-making levels should also attend these kinds of trainings with us so that they can see how they limit us,” said Türkan Pehlivan. Pehlivan who is the director of the Adana province in her party, is running for membership of council in Seyhan province, Adana. 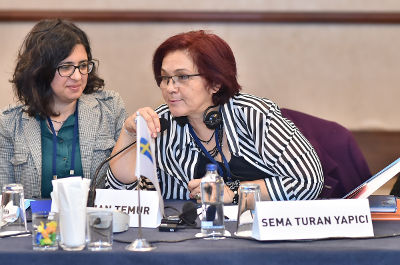 “The presentation about transformational leadership was interesting. I see that the one who adapts to change quickly will survive, not the one who is the strongest,” said Sema Turan Yapıcı, an active member of civil society organizations and her party in Adana. She said that she would run for candidate for 2019 local elections.

Asuman Tapanyiğit, an active politician in Adana who has been in elected positions as member of provincial councils both in 2009 and 2011, said that the workshop on communications made her understand the importance of communications to reach out to voters. “After the workshop, I learned that I have to use social media more. I tweeted for the first time,” said Tapanyiğit.

“If I am selected, I will make sure that my province is more green. I will build parks. I will regularly visit the elderly at residential facilities and take care of them. I also would like to work with women in my community,” said Meryem Ulaşlı, who is planning to run for muhktar in her province in Gaziantep. 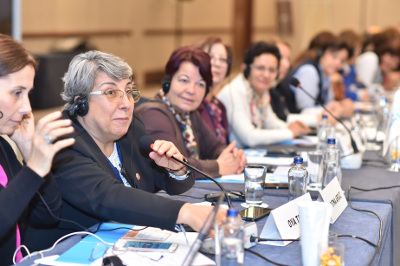 “Communication with target audiences at the right place and at the right time is very important. Political parties can only reach their target audience with proper campaigns. My self-confidence is strong but now I feel that I am more empowered,” said Fatma Arguz, an active member and vice coordinator of her party in Adana. She is running for membership of provincial council in Adana in the local elections in 2019.

The workshops are organized within the "Gender Equality in Political Leadership and Participation in Turkey" project funded by Swedish International Development Cooperation Agency (SIDA).

We, as women from different political parties and civil society organizations in Adana, came together at the “Women Politics Workshop” organized by UN Women. We discussed and agreed on the principles of respect, diversity and cooperation for more women candidates in politics and we are empowered together.

We call upon all politicians, political parties, media and voters:

We call upon political parties to give more space to women in local elections and to support women’s participation and leadership at all level levels of public policy-making without discrimination. We believe that women politicians will also strengthen political parties.

Politics is not just men’s work. We want gender equality in politics.

We want temporary special measures in line with international conventions that we have signed in order to increase women’s representation in politics. We want Political Parties and Election Law and local government laws to be reformulated in order to contribute to gender equality.

We want media to use non-discriminatory, gender-sensitive language towards women politicians.

As women, in cities we live in, we claim to be equal partners in decision making to bring solutions to our local issues and in connection with we want local government budgets to be gender sensitive.

Equality empowers everyone! We want to work side by side with men in the field of gender equality.

We call upon all voters to support women candidates in order to transform the cities we live in with a gender equality perspective.

We believe that gender equality in politics will strengthen democracy.

We, as women from different political parties and civil society organizations in Gaziantep, Kahramanmaraş, Adıyaman and Mardin, came together at the “Women Politics Workshop” organized by UN Women. We discussed and agreed on the principles of respect, diversity and cooperation for more women candidates in politics and we are empowered together.

We call upon all politicians, decision makers at all levels, political parties, and media:

We call upon political parties to give more space to women in local elections and to support women’s participation and leadership at all level levels of public policy-making without discrimination. We believe that women politicians will also strengthen political parties.

We want Political Parties and Election Law and local government laws to be reformulated in line with temporary special measures. Thereby, we want women to run for elections at top of the lists so that they can win, and we want positive discrimination in budgets for women in the election campaigns.

Problems such as livelihood, rural development, employment, education, air pollution, drugs, violence against women and child abuse in our cities have more effects on women. We will include these issues in our election campaigns in order to deliver solutions from a women’s perspective. Women must feel safe in all spaces of the city.

We, as women, are strong together and will solve the problems of our cities by taking more space in politics with gender equal policies and gender sensitive language.

Related News
31/03/2020
To empower women, municipal work needs a gender perspective
17/10/2019
High-level panel discusses ways of preventing violence against women in politics
14/05/2019
Women candidates in Turkey’s elections get ready to take up their new roles in local government
17/01/2019
Women’s groups to monitor the local elections in Turkey from gender equality perspective
24/12/2018
Take Five: “Our purpose is to support all women candidates who wish to stand for elections”
END_OF_DOCUMENT_TOKEN_TO_BE_REPLACED