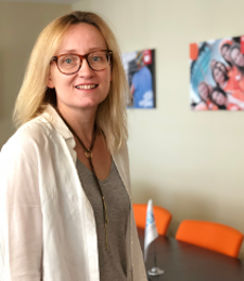 Iris Bjorg Kristjansdottir is a Gender and Humanitarian Specialist at the UN Women Regional Office for Europe and Central Asia based in Turkey. She has over 15 years of experience in migration policy and refugee response, working with the United Nations, the Government of Iceland, the local government in Reykjavik and with non-governmental organizations. Prior to joining UN Women, she served as a Senior Advisor on Migration for the Ministry of Justice in Iceland.

The wings of a bird are often used as a metaphor for gender equality. If both of its wings don’t have the same strength, a bird can lose direction and may not fly. Imagine that same bird flying across oceans, through continents, with no awareness or respect for countries or borders.

The metaphor of the bird puts things into a new perspective. The world has expanded and shrunk at the same time. We are more dependent on each other than ever before. The society relies on these exchanges and interactions. While birds are free to cross oceans, countries and borders, we have created a complicated framework or system for people to travel across borders.

In 2017, the number of international migrants reached 258 million, representing 3.4 per cent of global population[1]. Asia hosts the largest number of international migrants (80 million), followed by Europe (78 million). Economic migration and movement of labor migrants are essential for economies. Forced migration has boosted[2] many host economies, yet has several dimensions: those refugees that are well-off and and establish for themselves a sustainable living condition in their new country; those that use every drop of their own resources to manage or barely manage to survive; and those that are either left behind in the middle of the conflict, unable to travel or unable to create humane living standards for themselves in the host country without external support.

Women and children constitute the majority of the last group. They’re often unable to travel long distances with their children and/or are subjected to  harsh and life-threatening situations on the route, including gender-based violence. They have to fight three wars:

Many refugee women have gone through all these layers, fought their battles and been subjected to harm on each level. Some get stuck in the labyrinth of these layers, in a war zone that seems to never end.

The conflict in Syria continues to drive the largest displacement crisis in the world. By mid-2018, Turkey hosted over 3.5 million Syrian refugees, of which around 70 per cent are women or children.[3] In 2017,there was a 21 per cent increase in the refugee population in Turkey, from 2.9 million at the beginning of 2017 to 3.5 million at the end of the year[4]. Due to the ongoing conflict and internal displacement in Syria, more might be expected to cross the borders in the coming months.

In 2017, UN Women, in partnership with the Association for Solidarity with Asylum Seekers and Migrants (SGDD-ASAM), carried out a comprehensive needs assessment for Syrian women and girls in Turkey.  Interviews with 1,230 women and girls revealed that many live below the poverty and hunger thresholds, isolated from their host community, and unable to engage with economic life due to family burdens, lack of knowledge of Turkish and employability skills. The study found that 70 per cent of Syrian women do not speak any Turkish, blocking their access to rights and services.

According to the data collected, only 15 per cent of women work in income-generating jobs. Thirty-six per cent of women described their housing as bad or very bad, and 17 per cent said that they live in sub-standard accommodations such as basements with no sunlight and poor ventilation, and shanty houses.  Overcrowding is a chronic problem, putting additional care burdens on women and generally increasing the risk of sexual and gender-based violence.

Syrian women and girls’ ability to overcome their vulnerabilities is limited by their lack of access to vocational training which only 7 per cent partake in. Only 23 per cent of 15 to 17-year-old girls attend school, mainly due to child marriage, family pressure, work or household and care responsibilities. Yet in focus group discussions, Syrian women specifically raised the importance of language courses and the provision of childcare services to help them continue their education and attend vocational training.

In Turkey, UN Women has become an active change agent in the refugee response since 2016 with an agenda to empower refugee women and girls, and ensure their access to opportunities, rights and services, as required by international treaties and the national legislation. The SADA Women-only Centre, launched by UN Women in Gaziantep, Turkey, in 2017, provides livelihood skills and psycho-social services to refugee and local women. The Centre is run in partnership with the International Labour Organization (ILO), SGDD-ASAM, and the Gaziantep Metropolitan Municipality, with financial support from the European Union (EU) Regional Trust Fund in Response to the Syrian Crisis, the 'Madad Fund' and the Government of Japan.

UN Women supports the expansion of municipal capacity in refugee response, through the implementation of holistic protection systems, outreach and economic empowerment initiatives and social cohesion activities for both refugee and host community women.

Women affected by war are at greater risk of being harmed and victimized, of ending up in vulnerable situations and of having fewer opportunities for self-reliance and sustainable living in their country of refuge. Responding to the immediate needs of refugee women and girls continue to be urgent. As UN Women, we will continue and expand our work in Turkey to respond to more refugee women and girls, especially those in the most vulnerable conditions.

Related News
17/08/2018
Call for proposals: Strengthening the Resilience of Syrian Women and Girls and Host Communities in Turkey
16/08/2018
From Where I Stand: “I transformed into a new person”
08/04/2020
Call for applications: Small grants for women-led civil society organizations in Turkey
25/09/2019
From the war in Syria to top 100 of Paris
18/03/2019
Call for Proposals - Social and Economic Stabilization and Strengthening the Resilience of Refugee Women and Adolescent Girls in Turkey
END_OF_DOCUMENT_TOKEN_TO_BE_REPLACED