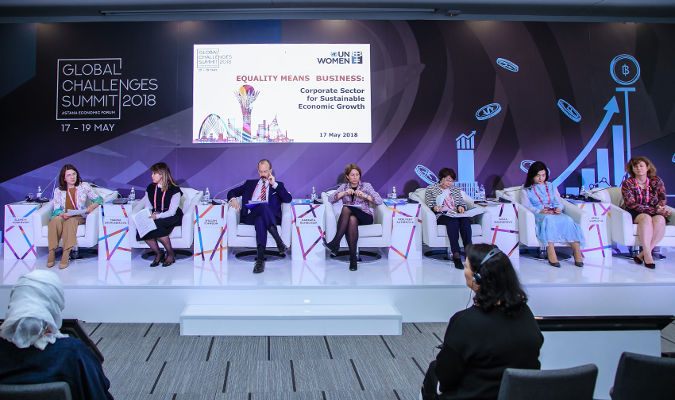 On May 17 and 18, UN Women spotlighted women’s role and important contribution in addressing global challenges the Astana Economic Forum 2018 (AEF), the most prominent and ambitious business event in Eurasia.

In her opening remarks, Elaine Conkievich, UN Women Representative to Kazakhstan, stated, that “gender inequality remains one of the biggest challenges of today’s world and the business sector has an active role to play in meeting it, especially under the 2030 Agenda for Sustainable Development”.­­­ 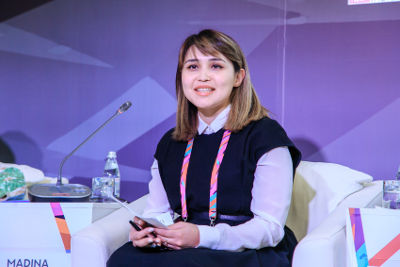 “Speaking of gender equality, we all need to keep in mind that women are a great power, who, on an equal footing with men, can effectively contribute to the economic development of the country. Thus, strong, successful and competitive women mean strong, successful and competitive states on the global arena,” mentioned Madina Zhunusbekova, Vice-Minister of National Economy of Kazakhstan, welcoming the panel participants.

The speakers of the session included William Tompson, Head of Division Eurasia, Global Relations Secretariat at the OECD, Barbara Rambousek, Acting Director for Gender and Economic Inclusion at EBRD, Erika Kvapilova, UN Women Representative Georgia, Meruyert Kazbekova, Member of Kazakhstan’s Parliament and Chair of the Business Association of women-entrepreneurs “ASIA”, uniting women from Central Asia and Afghanistan, and Aziza Shuzheyeva, Businessperson and Member of the Executive Board of the Association of Business Women of Kazakhstan.

The panelists discussed a number of international initiatives promoting gender equality and women’s leadership in entrepreneurship and economic development. The initiatives under consideration included OECD’s Gender Initiative, Women’s Empowerment Principles, and EBRD’s Strategy for Gender Promotion and Strategy for Economic Inclusion, advancing women’s empowerment and guiding the transition of the countries to inclusive economies, leveraging the potential of the private sector to create opportunities for all.

The panel session addressed a wide range of issues related to women’s economic empowerment, including the ways to promote women in business, access to financial services, development of entrepreneurship skills, public policies for enhanced economic opportunities, women in decision-making in the private sector and many others.

The issues of advancing women’s leadership in business, government were also discussed at the round-table entitled “Rights instead of Privileges: How Women Leaders Can Influence the Modern World?”, co-organized by UN Women in Kazakhstan. 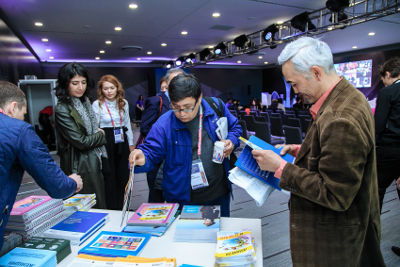 On May 18, UN Women Kazakhstan also organized a press briefing at the Global Challenges Summit 2018 Press Centre. UN Women Kazakhstan Representative Elaine Conkievich and EBRD Acting Director for Gender and Economic Inclusion Barbara Rambousek made their statements on the importance of women’s economic empowerment, tackling gender pay gap and barriers to carrier advancement across all the sectors of economy in Kazakhstan and globally.

Since 2008, the Eurasian “Davos” Forum have attracted more than 50,000 delegates from 150 counties, including 20 Nobel Prize winners and more than 30 prominent politicians. A wide variety of scientists, economists, journalists, politicians, world-renowned think tanks and business leaders have spoken at the Forum over the years.

In 2018, as a response to an unprecedented global social and economic progress, rapid technological growth and digitalization the Global Challenges Summit was launched as the new format of the Astana Economic Forum[1]. All 75 events of the program were dedicated to the planet’s main challenges: from economic growth, the stability of the resource base, digitalization and urbanization to the longevity and financial revolution, global security and cultural shifts. According to the official statistics 6120 people, including 1147 foreign delegates from 101 countries, attended the Global Challenges Forum 2018 in Astana.

Related News
24/04/2015
Inspiring and advocating for women living with HIV in Kazakhstan
17/03/2022
Kazakhstan's gender equality achievements during the 30 years of its independence showcased at the UN Headquarters photo exhibition
15/12/2021
European Union and UN Women join forces to provide financial and technical support to 22 civil society organizations
12/11/2021
Call for Proposals to support the establishment of a regional funding mechanism for the Central Asia women’s movement.
09/03/2021
This is what leadership looks like: How three women mayors in Moldova are making a difference every day
END_OF_DOCUMENT_TOKEN_TO_BE_REPLACED