In the words of Oksana Kononets: “Disability helped me to realize my inner strength”

25-year-old Oksana Kononets had an accident three years ago which resulted in a spinal injury and a disability for life. Since then, she’s decided to become a model to provide women with disabilities a platform to be visible. Last year, she was chosen Miss World Ukraine in a wheelchair. Living and working in Kyiv, capital of Ukraine, she combines her roles as a model and a social worker through her charity “Unbroken” that helps women with disabilities break stereotypes in modeling and promotes equal rights and opportunities for people with disabilities. Kononets collaborates with UN Women to raise awareness about the discrimination that women with disabilities face in Ukraine. 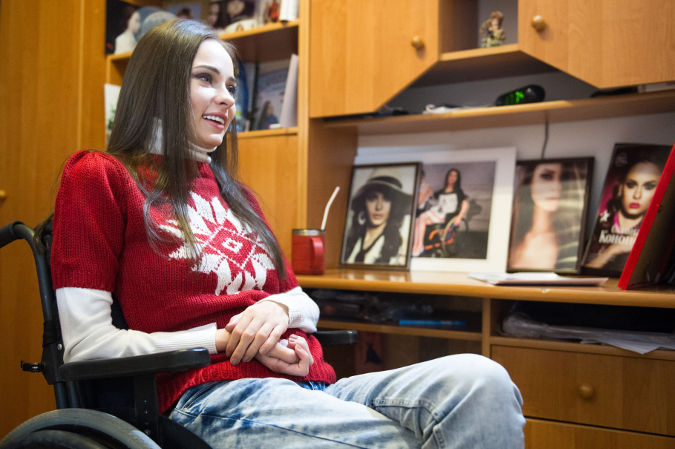 “I believe that our abilities are limited only by lack of access and poor infrastructure” - Oksana Kononets Photo: UN Women/Volodymyr Shuvayev

I want to change the way people perceive anyone who is different from them. Three years ago, I had an accident that had resulted in spinal injury and doctors said I was unlikely to move. I stubbornly worked hard to rehabilitate and, unexpectedly, disability has helped me to realize my inner strength and power to keep pushing forward. I also gained an understanding that our society perceives people who are different in a cruel way. Particularly, by isolating them. It was only by luck that I could complete my higher education because my University department was in an accessible building.

Since my disability, I gained courage to pursue my hidden passions. I’ve been modelling for several years now, which is something I had not dared before. Many photographers are supportive of my abilities and it encourage me to give women with disabilities a platform to be visible.

I started a nonprofit organization “Unbroken” with the goal to break the stereotypes about what people with disabilities are able to do and to introduce modelling to women with different backgrounds. We have already worked with many brands and have gotten so much positive feedback from both people with and without disabilities.

Ukrainian society still lacks an understanding of inclusivity and disability. People often stare at me, pass me on the street just to look me in the face, while at times refuse to give me a hand not to touch me. Two years ago, my cousin gave birth to her first child so I wanted to visit her at the hospital, but I was not allowed to use the elevator in the building because I could ‘break it’ with my wheelchair. ‘Grandma, what is that?’ was the reaction of one little boy when he saw me on the street.

I think some of it is due to how people with disability used to be perceived in the former Soviet Union. They used to be invisible, referred to as disabled people and rarely seen, as if everyone was ashamed of them. I believe that now the attitude is changing, people with disabilities want to be more visible, and the society is willing to accept and see them.

I visit schools and kindergartens to interact with children who may have never seen a person in a wheelchair before. I notice that young children do not mind my disability and I believe they will live in a more accepting society.

I always wanted to make the world a better place, and since my disability I have gained a unique opportunity to advocate for people who are different. I work to contribute to a world where people with disabilities are perceived and treated as people first and foremost, with their disability being not only secondary, but completely irrelevant.”

Related News
09/12/2019
In the words of Tatyana Bobrovska: “The younger generation will bring change to society”
29/12/2017
Women with disabilities are unable to access public services in eastern Ukraine, finds UN Women’s Gender Audit
20/06/2022
In the words of Elena Biceva: “By taking care of ourselves, we can help even more”
17/06/2022
In the words of Larysa Denysenko, a Ukrainian legal expert: “Sexual violence is a tactic of intimidation, torture and humiliation”
16/06/2022
Women with disabilities from Montenegro empowered to recognize and report violence against women
END_OF_DOCUMENT_TOKEN_TO_BE_REPLACED