In the words of Tatyana Bobrovska: “The younger generation will bring change to society” 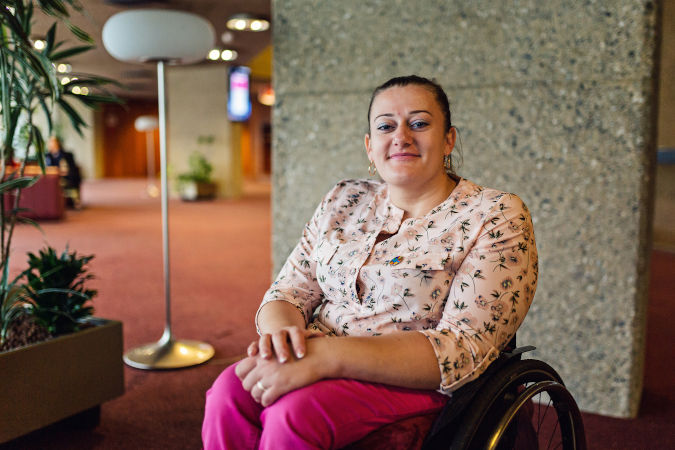 Tatyana Bobrovska, 36, attended the 25th regional review meeting of the Beijing Platform for Action (Beijing+25) for the UN Economic Commission for Europe (UNECE) as well as the Civil Society Forum ahead of the meeting. Ms. Bobrobska represented the Association of Women with Disabilities of Northern Donbas, Ukraine, and highlighted why it is important to have a dialogue for achieving gender equality and women’s rights.

I attended the Beijing+25 Regional Review Meeting to represent women with disabilities and their rights because I would like for our rights to be declared not only on paper but also to have mechanisms for their implementation. I am very happy to see the willingness of all the participants to cooperate, to have a dialogue and to hear and be heard. You can share your problems openly because there is a willingness to help.

This is very important for us, women from Ukraine, especially now. It is very difficult for women with disabilities from Ukraine to achieve their rights, not to mention our medical rights and access to healthcare services. The state does not allocate enough funds to finance programmes for medical care adjusted for women with disabilities. You need to constantly prove and confirm your rights and your abilities.

Housing is another significant problem at the moment in the Donbas [in eastern Ukraine], especially for people with disabilities. In our country, there is poor infrastructure for people with disabilities, which limits their mobility and access to buildings and public services. And, currently, it’s twice as difficult because of the conflict. People have been forced to move from their homes where they have created some kind of adapted living conditions. It is very difficult for them to find the same domestic set-up.

We need women with disabilities in political life and in decision-making processes across the region, including in Ukraine, so that our demands are heard and understood. We are certainly making some progress, but still, we are so far behind Europe in these matters.

And here comes the most difficult task - to change people’s mentality. But, fortunately, the younger generation, thanks to inclusive education and due to the fact that people with disabilities are more present and participate in public and political life, think differently.

The younger generation will bring a change to society.

My wish is that women’s rights in the world and in Ukraine are not only declared on paper, but that we also benefit from them and that authorities work to protect these rights.

Maybe, after these meetings which are happening today, we will not have our rights achieved overnight, but I am confident that it is a big step towards making us heard and seen.”

Related News
30/10/2019
Women artists in Ukraine take stock of their influence
03/12/2021
In the words of Valentyna Dobrydina: “I promised myself that I would defend the rights of people with disabilities”
09/12/2019
Take five: “Gender-responsive budgeting is a tool to empower women and to reduce inequality in our society”
06/12/2019
In the words of Ilayda Eskitaşçioğlu: “2020 is the year of gender equality, and a year for reflection”
06/12/2019
Altynai Omurbekova: “We must offer our unconditional support to the youth so that they can further advance gender equality”
END_OF_DOCUMENT_TOKEN_TO_BE_REPLACED