In the words of HRH Dr. Nisreen El-Hashemite: “We need to encourage girls and young women to pursue science and stay in science careers”

Her Royal Highness Dr. Nisreen El-Hashemite is an Iraqi princess who defied royal protocol and became a medical doctor and a geneticist. Popularly known as the “Science Princess,” she holds advanced degrees in biomedical science, molecular biology, and genetics. She has used her passion and experience as a prominent doctor and scientist to advocate for more women in science and medicine, and for empowering women and girls to follow those paths and fight for equal pay. She is the Executive Director of the non-governmental organization (NGO) Royal Academy of Science International Trust (RASIT), which is a partner of UN Women in Europe and Central Asia region. RASIT is committed to improving the lives of girls and young women by giving them opportunities to shape their own future. She began leading RASIT’s Women in Science International League, a programme designed to promote women working in science, connect them to each other, and assist them in seeking scientific employment. 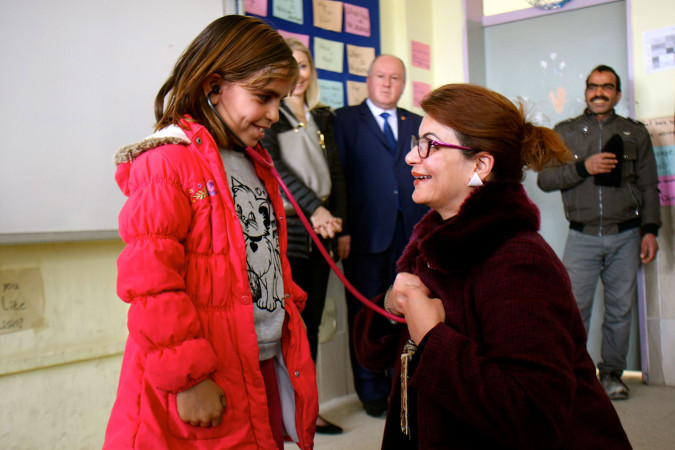 Princess Nisreen El-Hashemite presents a medical stethoscope to a Turkish girl whose dream is to become a doctor. Photo: UNFPA Turkey

“When I said I wanted to be a doctor, I was always told: ‘Science is not for royalty. Nobody will work for you.’ I studied hard. I was determined to become a doctor. I was lucky that I had professors who saw me as someone interested in being a doctor. They did not care about my royal title.

My three brothers, all of whom are in science and engineering now, were my mentors and my friends. They taught me about math and how to work through their physics assignments. One brother showed me the connections between science and art and culture. I learned that science is beautiful.

At age seven, I knew I wanted to be a doctor to put a smile on people’s faces. My family and teachers at home encouraged my focus on science. My parents picked toys related to science and medicine. When I was growing up, we had intellectuals and professors of many disciplines in our home.

But when I started applying to colleges, some of the universities told me to look elsewhere, to find another institution that would match my title. Others told me go into the arts, like other royals.

But I believed in what I wanted to be. I broke tradition. I studied extra hours and got multiple science degrees and became a medical doctor. At first, I wanted to be a heart surgeon. But then, I made a promise to a little girl, Natasha. I was making my rounds at a pediatric ward and found that she was not sleeping and was crying all the time. She had a genetic blood disorder. She asked me if I would promise to help kids like her. “You have to keep your promise, or you will be lying,” she said to me. I kept my promise. I went into science, thanks to her. Natasha passed away shortly after I met her. But she brought me to genetics, where I developed techniques for prevention and further studied the causes of diseases that appears only in women or more sever in women.

I now spend time advocating for gender equality in science, and for equal pay between men and women in science and medicine. In 2015, I presented a resolution at the United Nations which declared Feb 11 to be the International Day of Women and Girls in Science, celebrating the achievements of women globally. I believe that women should not wait for others to give them their rights, but to find the courage to speak up for themselves.

We need to encourage girls and young women to pursue science and stay in science careers. We need stronger local, national and international policies that can help them follow those paths. Equal pay and paid maternity leave are important factors.

Girls also need positive role models to counter TV and movie stereotypes of women in science, who are often portrayed on as lonely, bookish nerds.

Science is the basis for many solutions to the world’s challenges. If women aren’t a part of science, technology, engineering or mathematics, they will be left out.

Science and technology are the future and the future belongs to everyone.”

Related News
29/03/2022
Hundreds of tomorrow’s leading women scientists attend event aimed at inspiring more girls to get involved in STEM
10/02/2022
In focus: International Day of Women and Girls in Science
10/02/2022
Interview: “As a scientist, my mission is to raise public awareness and contribute to informed decision-making”
08/02/2022
From Where I Stand: "Think about the problems you face daily and dare to create new solutions."
08/02/2022
In the words of Nino Enukidze: “Technology is the most powerful tool of support”
END_OF_DOCUMENT_TOKEN_TO_BE_REPLACED