In the words of Ainuru Altybaeva: “Bride kidnapping is not a tradition, it’s a crime”

Ainuru Altybaeva serves as a Member of Parliament in Kyrgyzstan, and has been an activist for women’s empowerment for over 10 years. She was the initiator of a law on toughening penalties for bride kidnapping, and a vocal participant of the national UNiTE to End Violence against Women and Girls women’s movement, coordinated and led by UN Women in Kyrgyzstan. UN Women partnered with Altybaeva on several advocacy initiatives in Kyrgyzstan, including an advocacy campaign in the parliament on adopting the new law on domestic violence. She is the former chair and initiator of the Kyrgyz Parliament’s Women’s Caucus. 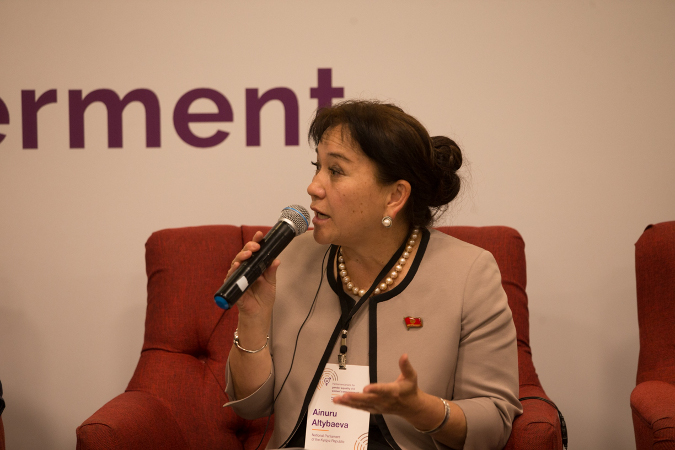 “A local woman once told me that in their town a woman, kidnapped by a man, committed suicide because she did not want to live with him. I thought that this should not happen. I studied the legislation of our country and noticed that the penalty for kidnapping a person was very harsh – 10 years of detention. The penalty for stealing cattle was 11 years. But the penalty for bride kidnapping was up to three years of jail sentence or just a fine.

While doing research to prepare a new law proposal, we noticed that there were very few criminal cases of bride kidnappings, and even fewer cases got to the court. It is a matter of mentality and stereotypes. Even parents and relatives would say, “So what if you were kidnapped? Let's not report it to the police. It would be shameful for you to admit in court that you were kidnapped and raped.” So, people kept silent about this issue.

“Perhaps you are not Kyrgyz. Perhaps you don't know our country's traditions. Bride kidnapping is a beautiful national tradition," said some of my male colleagues while I was working on the new law proposal. But thankfully, many other male and female colleagues, many NGOs, women organizations, gender experts supported my law proposal and helped to lobby for it. We ran a large campaign before the law proposal was voted.

We discussed the proposal for one year. Many media organizations supported our cause. I gave interviews every day at various radio and TV stations. I also spoke at several clubs and universities to explain that I didn’t want our young men to be jailed for bride kidnapping. I wanted them to know that bride kidnapping is not a beautiful Kyrgyz tradition, it is a crime. If they broke the law, they would be punished. I think it is not right to start a family out of violence.

Also, now if a woman gets kidnapped and raped, the case cannot be closed based on reconciliation. Before this law, to avoid a penalty, the couple could reconcile. Now the kidnapper, rapist, must be punished.

Thanks to a large information campaign with women’s groups and journalists, young men and women were informed about the new law. Young women knew that if they were to be kidnapped, they had rights and they could report it. Many found out that this is not a tradition, but a crime.

As a result, now the number of bride kidnapping cases has decreased significantly.

Related News
12/11/2021
Call for Proposals to support the establishment of a regional funding mechanism for the Central Asia women’s movement.
13/08/2020
In Kyrgyzstan, pandemic-related domestic violence increases vulnerabilities
01/06/2020
Women confront pandemic-related violence against women across Europe and Central Asia
20/05/2020
From where I stand: “People weren’t prepared to stay home for so long and many are panicked, anxious and stressed”
19/05/2020
Social media broadcast draws attention to domestic violence amid COVID-19
END_OF_DOCUMENT_TOKEN_TO_BE_REPLACED