During her first official visit to Ukraine, from 8-10 June, UN Women Executive Director Phumzile Mlambo-Ngcuka met with government officials, parliamentarians, donors, women's groups, internally displaced women and other women facing multiple forms of discrimination. Her visit came at a crucial time for Ukraine when the country addresses the effects of the on-going armed conflict and implementing an ambitious national reform agenda. At her meetings, the Executive Director highlighted the need to prominently feature gender equality in all reforms and recovery and peacebuilding processes. 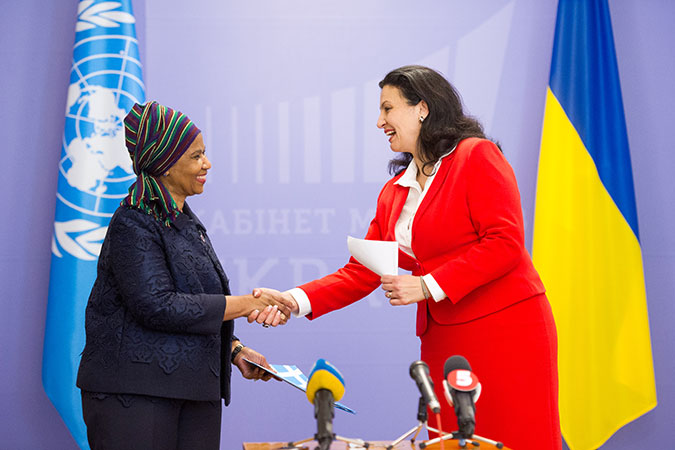 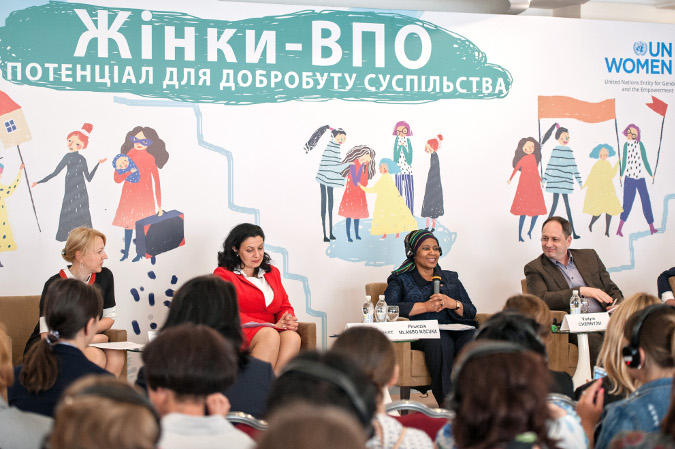 Later that day, Ms. Mlambo-Ngcuka spoke at the opening of a workshop on women’s human rights in recovery and peacebuilding together with Vice Prime Minister Ms. Klympush-Tsintsadze, Vadym Chernysh, Minister of Temporarily Occupied Territories and Internally Displaced Persons, and Serhiy Kyslytsya, Deputy Minister of Foreign Affairs. “Women are custodians of peace. Peace is more sustainable if more women are involved as decision-makers and leaders,” underlined Ms. Mlambo-Ngcuka. 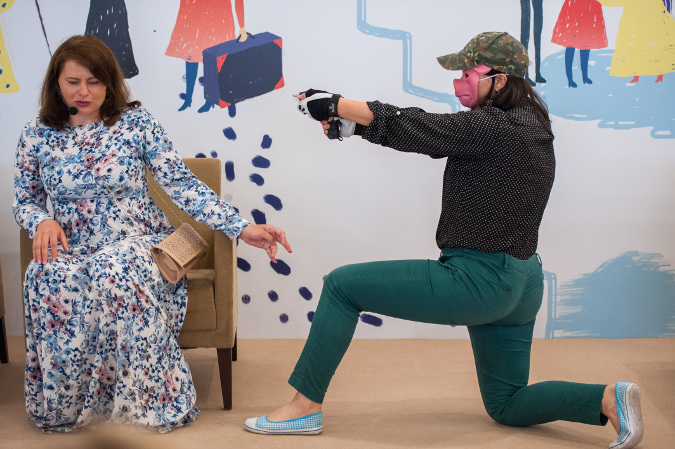 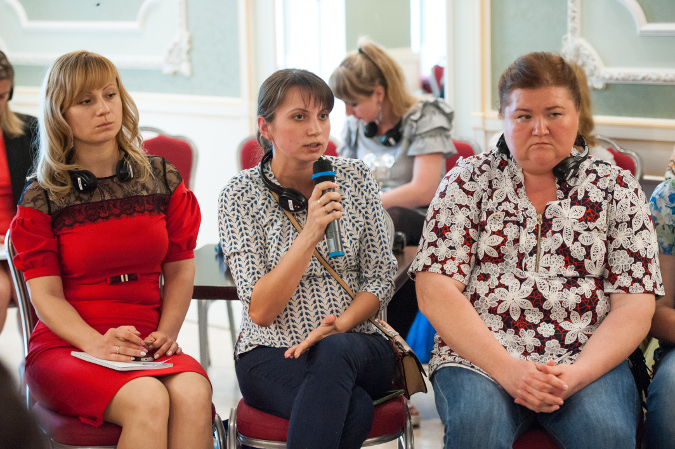 Discussions with internally displaced women from the conflict-affected territories in the east of Ukraine. Photo: UN Women/Volodymyr Shuvayev

Following the workshop, Ms. Mlambo-Ngcuka held a lively discussion with internally displaced women from the conflict-affected territories in the east of Ukraine and Crimea. Women IDPs shared their strories of overcoming stigma and discrimination in host communities and challenges for social integration. “Internally displaced women have a huge potential for developing communities. We are eager to learn, work and contribute to the well-being of our country,” said Maryna Daniluyk, a displaced woman from Shastie community in the Lugansk region, in eastern Ukraine. “UN Women stands between the society in need and the government as an honest broker. We support your needs and concerns using available instruments at our disposal, such as the UN Security Council Resolultions on Women, Peace and Security,” reaffirmed Ms. Mlambo-Ngcuka.

On day two, Ms. Mlambo-Ngcuka met with civil society organizations and women’s rights activists to discuss the state of gender equality in the country. Civil society representatives that advocate for the rights of a wide variety of groups, including those that face multiple forms of dicrimination; such as women with HIV, Roma women, women with disabilities and LGBTI; stressed the need to address the rights of these groups, their access to social services and their representation in leadership and decision making positions. "Political participation of Roma women at all levels is almost extinct," said Zola Kondur from the Chiricli International Roma Women's Fund. "Women's access to justice is crucial for the implementation of the Istanbul Convention," said Kateryna Levchenko from La Strada-Ukraine. Ms. Mlambo-Ngcuka highlighted Ukraine as an example of a country that wouldn’t be able to sustain progress without the women’s movement. “UN Women was born because women demanded this. We are created at the request of the women's movement and our job is to continue supporting it," ensured Ms. Mlambo-Ngcuka. 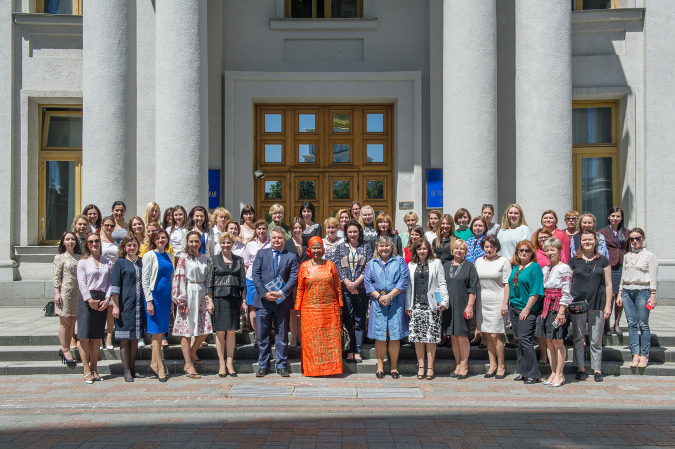 Ms. Mlambo-Ngcuka held a high-level meeting with the Deputy Minister of Foreign Affairs, Sergiy Kyslytsya, about how to effectively advance gender equality and women’s rights in Ukraine. Mr. Kyslytsya stressed the importance of educating people about the meaning of gender equality and providing information to women about their rights. Ms. Mlambo-Ngcuka highlighted the significance of Sustainable Development Goal 5 about gender equality: “It is very important that Goal 5 is a priority in Ukraine, especially indicators about combatting discriminatory laws,” said Ms. Mlambo-Ngcuka. She also underlined the ratification of the Istanbul Convention as a critical step to eliminate violence against women and girls. 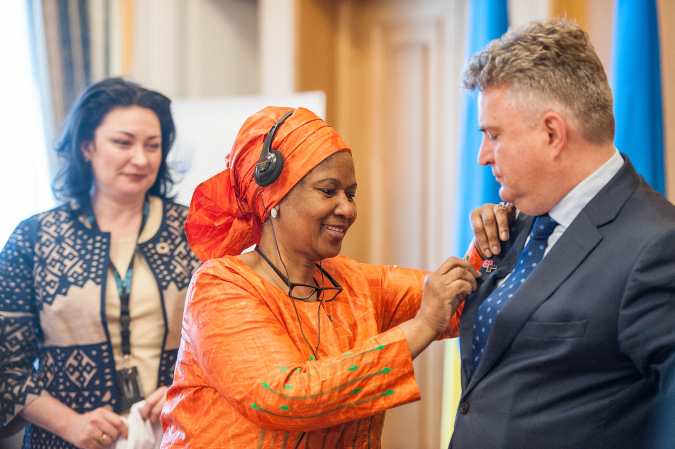 After the meeting, Ms. Mlambo-Ngcuka announced Deputy Minister Kyslytsya as the first HeForShe champion in Ukraine for his sincere commitment to promoting gender equality. Ms. Mlambo-Ngcuka thanked the Deputy Minister for being a true advocate of women’s rights and advocating for the ratification of the Council of Europe’s Istanbul Convention. Mr. Kyslytsya made a personal request to the ED to ask high-level officials visiting Ukraine to mention women’s rights issues in their speeches. 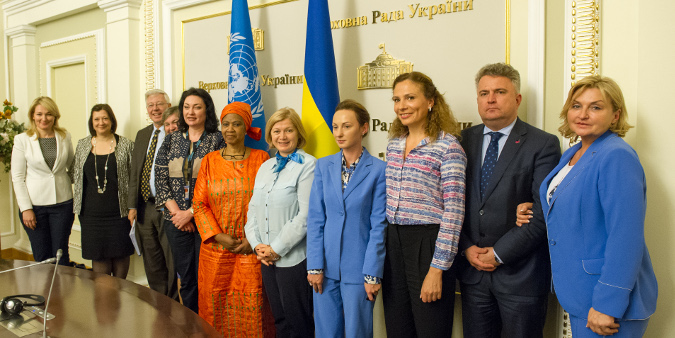 Later that day, Ms. Mlambo-Ngcuka met Ukrainian Members of Parliament (MPs) to once again highlight the criticality of ratifying the Istanbul Convention and to discuss achievements and challenges in passing legislation that protects and advances women’s rights in Ukraine. “Ukraine achieved a lot in ensuring gender equality. I hope for further steps in this direction. Putting gender equality above politics is crucially important. Let us aim that by 2030 gender equality is a rule rather than an exception.” said Ms. Mlambo-Ngcuka, ensuring MPs that UN Women will provide support along this path.

On her final day in Ukraine, Ms. Mlambo-Ngcuka addressed Ukrainian media together with Vice Prime Minister of Ukraine for European and Euro-Atlantic Integration Ivanna Klympush-Tsintsadze, Ambassador of Sweden Martin Hagström and Ambassador of Canada Roman Waschuk. Ms Mlambo-Ngcuka launched our new initiative to end discrimination against women in Ukraine, "CEDAW in Action!," funded by the Government of Canada, and "Gender equality at the center of reforms in Ukraine," funded by the Government of Sweden, which aims to integrate gender equality into the reform process. "Reforms are the silver lining in the cloud. Now is a strategic moment for Ukraine to push the frontier for gender equality," said Ms Phumzile Mlambo-Ngcuka. "We need to develop legislation to ensure there are mechanisms to protect women," stressed Ms Klympush-Tsintsadze. Mr. Waschuk highlighted Canada’s feminist international development policy and said, “We hope that with UN Women, the UN, Ukrainian authorities, and civil society activists, we will be able to jointly achieve equality and prosperity for everyone in Ukraine and globally.” Mr. Hagström emphasized the prominence of unleashing the potential of half of the population, women and girls, and especially underlined the importance of eliminating violence against women and girls: “We look forward to the ratification of the Istanbul Convention in Ukraine to strengthen the fight against violence against women.”

Related News
12/04/2022
Executive Director meets with Ukrainian refugees and Moldovans leading the humanitarian response
11/04/2022
Speech: Women’s involvement is both a right and an opportunity for better outcomes
07/04/2022
Ukraine: UN High Level Officials urge the swift investigation of sexual violence allegations and call for strengthened measures to protect women and girls
08/06/2017
Speech: “It is essential to have women in the centre of peacemaking”—Executive Director
07/06/2017
UN Women Executive Director to visit Ukraine and Moldova
END_OF_DOCUMENT_TOKEN_TO_BE_REPLACED