At a UN Women-supported workshop, attendees agree that SDG 5 – achieving gender equality and empowering women and girls – should be among Ukraine’s priority SDGs. 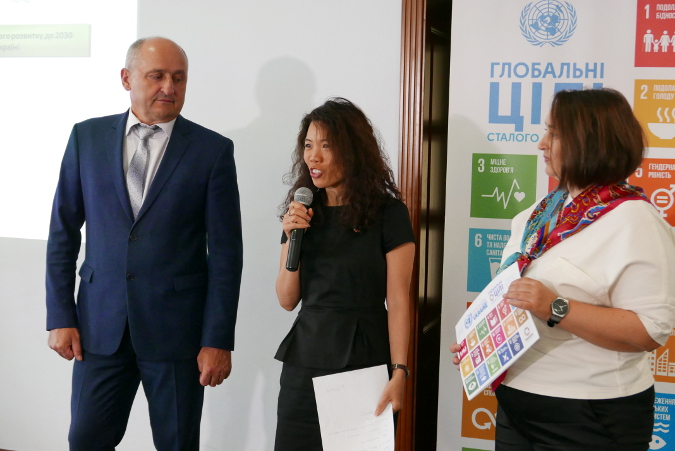 Gender discrimination is widespread in Ukraine, with women, children and the elderly disproportionally hard hit by the violence from the on-going conflict in eastern Ukraine. The ensuing breakdown in the rule of law has heightened gender discrimination and increased domestic violence and human trafficking. Across the Ukraine, gender norms are narrowly defined with traditional, patriarchal views and values reinforced by media and school curriculums.

In the midst of hardships, Ukrainian women have been advocating to include gender equality and women’s empowerment into the Government of Ukraine’s Strategy 2020, an ambitious reform agenda that addresses the country’s governance and socio-economic challenges. 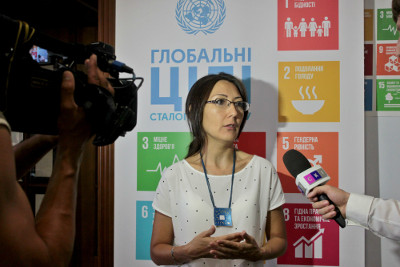 The SDGs are a set of 17 goals to end poverty, protect the planet, and ensure prosperity for all as part of a new sustainable development agenda. Each goal has specific targets to be achieved by countries over the next 15 years. Importantly, SDG 5 aims to achieve gender equality and empower all women and girls.

The meeting was part of a series of on-going national and community-level consultations to prioritize the 17 SDGs and set local goals and targets for each of them. Organized by the Ministry of Economic Development and Trade with the support of the UN system in Ukraine, the multilateral consultations include the public, civil society organizations, academia and gender advocates and women’s groups.

Tatiana Varema, Head of the Communal Department of Zhytomyr Oblast Administration, stressed the local importance of the SDGs: “Implementing the SDGs could improve people’s lives and contribute greatly to the economic development of our oblast.”

Mr. Valentyn Berezensky, specialist of the Department of Economy, Trade and Foreign Relations of Zhytomyr Oblast Administration, concurred: “Implementation of the SDGs could bring a better life for all.”

At the meetings, gender advocates and women’s groups supported by UN Women have argued for changes to Ukraine’s Strategy 2020 and other development strategies so that they more actively promote equal rights for women and girls. Ukraine’s SDG consultations include a human-rights based approach with a ‘leave no-one behind” principle that lets women voice their needs. 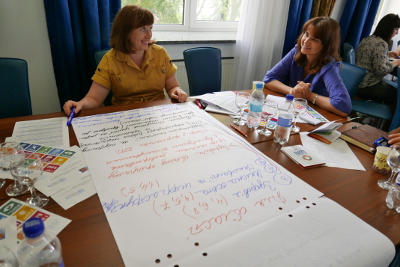 Gender activists succeeded in getting gender equality issues integrated into the facilitation of the workshop. As a result, SDG 5 on gender equality, and other gender-related targets were included in the list of priority topics.

Van Nguyen, Director of the UN Resident Coordination Office, told participants that the consultations would generate a common understanding of the SDGs and their targets, and give voice to people from a range of sectors and regions across the country: “By listening to a broad spectrum of the population, this workshop could provide important thinking on how we implement the SDGs in the Ukraine.”

Meeting participant Ms. Natalia Tarasenko, head of Paritet, a youth civil society organisation, underscored the consultations’ importance: “We believe that our joint efforts will change the lives of thousands of women facing gender challenges and inequality.”

Participants felt that the National Baseline Report of the SDGs in Ukraine – which will be based on results from Zhytomir and the country-wide consultations – will have a positive, fact-based impact on gender equality in Ukraine’s national planning and programming.

Related News
15/10/2020
In the words of Oksana Nikiforova: “Rural women has a strong will for change”
17/05/2022
Interview: “Transformative change can only be achieved in a peaceful world with the inclusion of all young persons in all of our diversity”
13/05/2022
From Where I Stand: “To create a sustainable world, we need to establish a life in harmony with nature and leave no one behind.”
14/04/2022
The Nature Lover
01/04/2022
In Focus: the Regional Forum on Sustainable Development for the UNECE Region
END_OF_DOCUMENT_TOKEN_TO_BE_REPLACED