In the words of Oksana Nikiforova: “Rural women has a strong will for change”

Oksana Nikiforova was displaced shortly after the armed conflict broke out in eastern Ukraine in May 2014. Trying to provide her five-year-old daughter and newborn son with a safer place to live, she left Luhansk without any prospects for her future. Nikiforova and her family changed several cities in Ukraine, applied for refugee status in Poland and finally settled down in Novoaidar, a small town in Luhansk region. Five years after fleeing her home, Nikiforova decided to start a new life and take matters into her own hands. She mobilized a women’s self-help group and created an NGO to change her community and meet women’s needs. 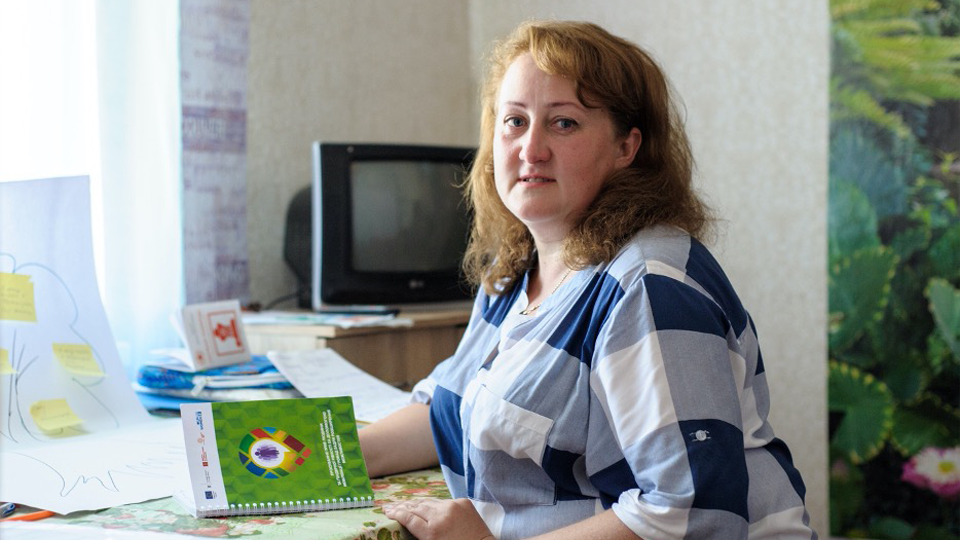 Oksana Nikiforova has been a leader of change in her community. Photo: Vitaliy Shevelev

I was born in Abkhazia [breakaway region in Georgia] and witnessed the military conflict there. Back in the 1980s, my mother took me and my brother and ran away from the war in Sukhumi to Luhansk [in eastern Ukraine].

Years after, I suffered the same fate - took my two kids and escaped from the conflict zone. We were forced to leave Luhansk and in the next few years, we changed more than ten houses, before finally settling down in Novoaidar, a small city in the Luhansk region. We are urban dwellers, but in Novoaidar we started to breed chickens to earn money for a living.

I have always been an active and sociable person, but after everything we’ve been through, I withdrew into myself and was depressed, I didn’t know anyone here to ask for help.

One day, I saw a call for a training on community mobilization organized by UN Women. After the training, I was so inspired, I overcame my inner barriers and started mobilizing my community. I established three self-help groups in Novoaidar and three in neighboring cities. We have many plans and desire to improve the lives of our community. Rural women have a strong will for change. We are taking just the first step, but we will keep on going.”

Oksana Nikiforova strengthened her knowledge of human rights and gender and developed advocacy skills during Community Mobilization for Empowerment trainings organized by UN Women as part of the United Nations Recovery and Peacebuilding Programme implemented by UN Women, UNDEP, UNFPA and FAO. To date, the trainings reached more than 2,000 people who organized into self-help groups to create more resilient communities. Nikiforova facilitated several trainings on human rights and gender equality for women in Novoaidar and created a hub “Active women – successful community” that supports the psychological and emotional well-being of women. Her self-help group provided support for the community during the massive forest fires across the Luhansk region. Her work contributes to Sustainable Development Goal (SDG) 16, which promotes peaceful and inclusive societies and SDG 5, on gender equality and women’s empowerment.