As Tajik men migrate for work overseas, a significant proportion abandon their wives and children. A UN Women programme provides livelihood trainings and self-help groups for abandoned wives of Tajik migrant workers. The project has also led to the recognition of abandoned wives and children as a socially vulnerable group in the law, facilitating their access to free legal, economic and psycho-social services. 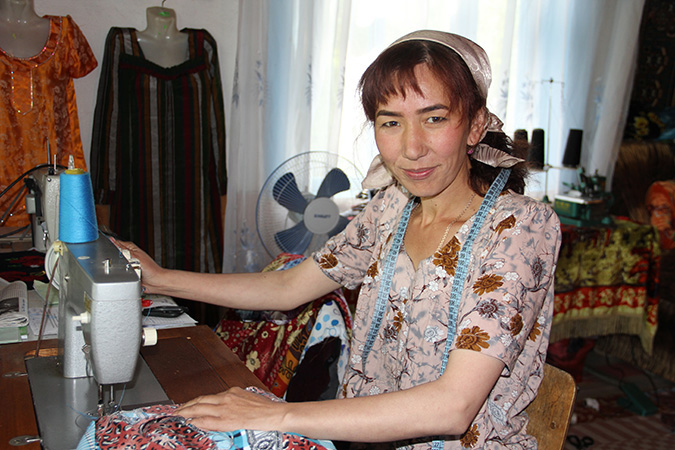 Sayohat Tashbekova welcomes visitors into her workshop where she, along with other abandoned wives of Tajik migrant workers, creates traditional crafts for sale. Photo: UN Women/Aijamal Duishebaeva

“Ten years ago, I married for love. A year after the wedding, my husband left me,” shares 33-year-old Sayohat Tashbekova, sitting in the workshop that she has set up in her parents’ home, where women from the village come together and learn to sew, knit, make traditional Tajik patchwork and more.

Looking at her smiling and happy, it is difficult to believe that just a year ago, she hardly left her house and suffered from severe depression. After being abandoned by her husband, a migrant worker, Tashbekova lost her home and belongings and had to move back into her parents’ home. She had no formal education, no job and no support.

“Despair was literally eating me away,” she says. “When I was a child, my mother had taught me to sew and knit. It grew to be a passion and joy, and became my escape in that difficult period.”

In 2014, when UN Women started the project “Empowering Abandoned Families of Labour Migrants in Tajikistan” in Tashbekova’s village, she was intrigued by the opportunities it presented.

“Sayohat’s first question was ‘Could it really be possible to make money for myself? Would I be able to learn something and teach others?’” recalls Aisulu Jenalieva, a community mobilizer who first introduced the project to Tashbekova. “Other women found her skills valuable, so Sayohat, along with a few others, set up a self-help group, to make socks, clothes, tablecloths and other household items that they could sell.”

Due to the high rates of unemployment in Tajikistan, about one million Tajik citizens—a third of men aged 20–39 years—have migrated and live in the Russian Federation [1]. A 2009 study by the International Organization for Migrants found that between 230,880 and 288,600 Tajik women and families were abandoned by migrant workers and living at or below the poverty level [2].

“We all learned from each other,” continues Tashbekova. “Someone knew the patchwork technique, someone could knit dzhurab (Tajik long socks) and someone else made dresses. By working together, complementing each other’s expertise, we were able to set up our workshop.”

Now, the group sells a variety of products, including clothes, blankets, toys and traditional cushion covers to other villagers. They also take their products to nearby towns and sell to tourists. 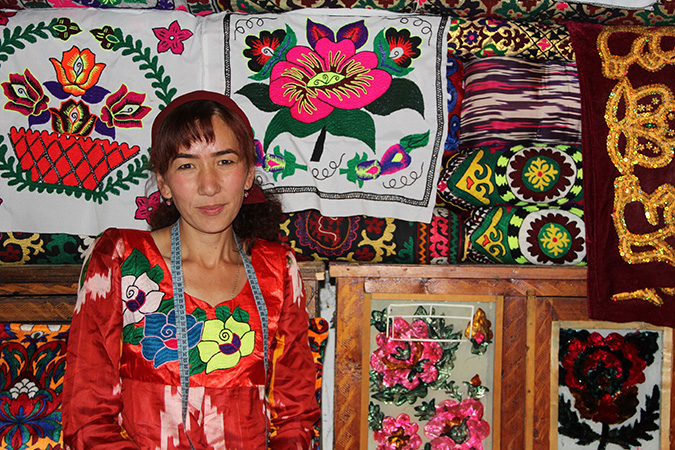 For Sayohat Tashbekova, the group represents more than economic opportunities. She found emotional support and connected with other abandoned wives, which helped her overcome her depression.

“In our group, there are 10 other women who have been left by their husbands, like myself,” she shares.  “We are comfortable with what we earn. Today, not only do we provide for our families, but we also invest in our business and train other women.”

With the financial support of the Ministry of Foreign Affairs of Norway, the project  has provided comprehensive legal, social and economic support to abandoned families of migrant workers in two regions of Tajikistan, from 2013 – 2016. To date, it has helped form 387 self-help groups and 30 joint economic initiatives; provided 3,000 abandoned wives with livelihood training and free legal support to nearly 4,500 women.

“Our project was unique because it targeted women, wives of migrant workers, who were not considered as a vulnerable group in Tajikistan,” explains UN Women Project Coordinator Zarina Urakova. “Since we raised this issue, the Government of Tajikistan acknowledged the fact that these women were vulnerable and needed support.” The project contributed towards the addition of abandoned wives and children of migrant workers as a new category of socially vulnerable group in the Government’s Decree #448 passed on 2 July, 2015, which facilitates their access to free legal, economic and psycho-social services. 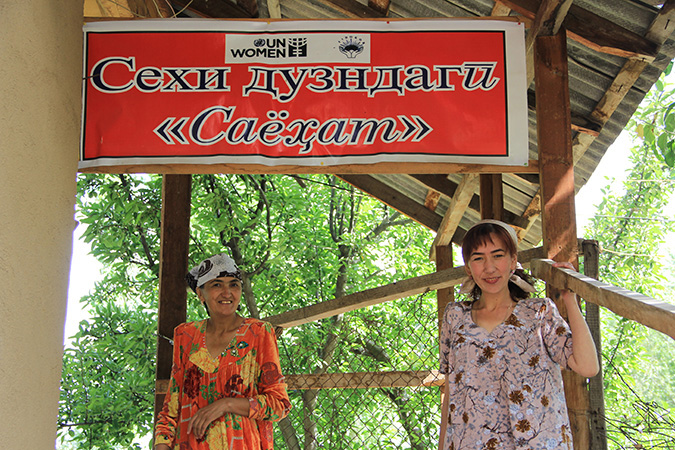 Tashbekova now works as a trainer at the Agency for Employment of the Rasht District. She teaches women from the Rasht Valley traditional techniques of sewing, patchwork and knitting.

“My goal in life is to learn even more sewing and knitting techniques, and to teach as many young women as possible all the things that I have learned through the project,” says Tashbekova. Gone are her days of depression and loneliness. She is vibrant, independent and has a new story to tell.